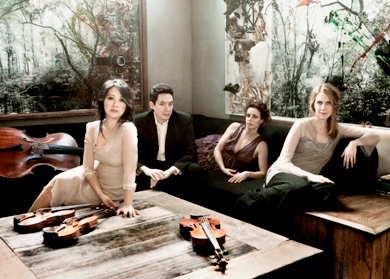 “It’s a small world,” says violinist Matilda Kaul, recalling how she came to join the Daedalus Quartet. “Min and I were both students of Donald Weilerstein at the Cleveland Institute of Music so we knew each other from there. And the person I replaced was also a student of Don’s, so we were all friends.”

Praised by The New Yorker as “a fresh and vital young participant in what is a golden age of American string quartets,” Kaul says that she and her Daedalus colleagues look forward to being in Cleveland and performing their program. “The Mendelssohn Quartet No. 1 in E-flat is just a wonderful piece. And the Britten Quartet No.1 in D — we that played a lot this past summer and we think it’s a fantastic piece. Besides, everyone is playing Britten, especially this week. So we are excited to play the quartet because of the anniversary year.”

Also included on Tuesday’s program is Erwin Schulhoff’s Five Pieces for String Quartet. “We’ve been playing it as part of our “Music from Exile” program. Schulhoff died while a prisoner in a concentration camp. He was sent there not only because he was Jewish but also a devote communist. He’s a great composer and it’s sad to think about what more he could have written had he not died so prematurely.” Kaul says that while the current “Music from Exile” program includes composers whose music came out of the experience of the rise of Nazism — for example the Terezin camp — the quartet hopes the programming theme is something they will live with well into the future. “There may be some expansion of the term exile, or kinds of exile, given that we do live in a country that is full of different refugee experiences.”

On Monday December 2nd beginning at 7:00 pm the Quartet will present a master class at CIM as part of the Winter Chamber Music Festival “I haven’t been back to Cleveland since I was a student and it will be so great to see the Cavanis again. They were such inspiring teachers, as was Peter Salaff. They really passed their fantastic love of chamber music on to so many of us and we all are so grateful for that. It will be very humbling to come back and to actually give a class in the presence of your own teachers. It’s sort of a scary prospect.” 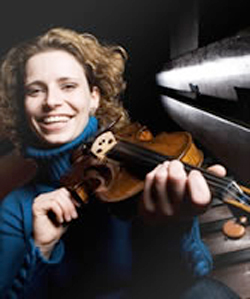 Does Kaul have any advice to pass on to young players who aspire to making chamber music their profession? “I think the most important thing is not to want to be like anybody else, but to want to be yourself, and maybe that’s the toughest lesson to learn. It’s fantastic to have great mentorship, but what you should most want is to grow into yourself as an artist. And I think CIM and many other schools provide a nurturing environment and that is the best grounding to find your own legs.” She adds that young players need the patience to develop those legs themselves, “and maybe that doesn’t happen your first year out of school but it will.”

And why did she want to be a member of a professional string quartet? “Honestly, I’ve wanted to play in a quartet my entire life. I’m not sure mine is an unusual experience, but I was introduced to quartet playing when I was about nine years old. And I think the social aspect of it when you are a child is really fun even if you do play quite badly. Besides, practicing by yourself is, well, tedious and sometimes not that motivating — all of those hours by yourself. So I think playing in a quartet added something that I found very engaging.”

Kaul remembers being invited to participate in music festivals with her quartet as a teenager, “I was totally enchanted by the idea that you could do this for a job — traveling around, playing concerts and hanging out and talking with people. It was the greatest, all of these creative people in one place enjoying each other’s company. I couldn’t imagine anything more fun. I guess that is kind of what we are still doing. Of course when you grow up it is a little more complicated, the process of rehearsing hour after hour. And hashing out your ideas is not always so fun.”

And what keeps her excited about string quartets? “I would be remiss if I didn’t say that the string quartet repertoire is unparalleled, and as I mature that is the driving force as to why I want to come back to it time after time. To play late the late quartets of Beethoven — and it seems that a number of today’s composers do reserve their best efforts for the string quartet.” Kaul adds that she and her colleagues feel lucky to be able to play the music of composers they believe in — such as Fred Lerdahl. “We really do enjoy working with people who are alive,” Kaul says laughing. “It really is a fascinating process.”