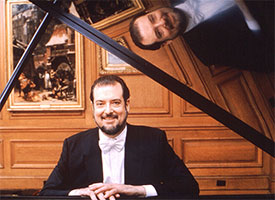 winning the 1970 Chopin International Piano Competition, pianist Garrick Ohlsson has built a reputation for being a musician of magisterial interpretive and technical prowess. Beginning on Thursday, January 10 in Severance Hall, the celebrated pianist will join The Cleveland Orchestra under the direction of Franz Welser-Möst for three performances of Tchaikovsky’s Piano Concerto No. 2 in G Major.

Boasting a repertoire of over eighty concertos, it was not until this past fall that Ohlssohn gave his first performances of Tchaikovsky’s lesser known concerto. And while he admits to having some initial reservations about the piece, Ohlsson says he has grown to like the concerto very much. We reached the always engaging pianist by telephone at his home in San Francisco.

Mike Telin: It’s a pleasure to speak to you again. I seem to remember you telling me back in the fall that the Tchaikovsky Second Concerto is a recent addition to your repertoire?

Garrick Ohlsson: That’s right. I learned it this year and I played it for the first time in September. So yes, it’s really quite fresh.

MT: Although I have read as much as possible and listened to recordings, I must admit that there is not a lot written about the piece, on-line anyway. I’m interested to hear your thoughts on the concerto.

GO: I’m not surprised to hear that, but I do have lots of thoughts about it. First of all, I’ve grown to like it. One of the reasons I never learned it earlier is that I had heard it a few times and I thought, well, it’s very effective but I’m not sure I like it that much.

GO: There was the odd coincidence of a double invitation which arrived a day or two apart from The Cleveland Orchestra and the Sydney Symphony. Vladimir Ashkenazy and Sydney asked me if I played it, and if not, would I consider learning it? And The Cleveland Orchestra said that Franz Welser-Möst would very much like to have it if I would do it. Those are two very lovely and incredible invitations that caused me to have another look at it. So I decided yes, and I’m glad that I did.

MT: I do find it to be an interesting piece.

GO: It is, although it’s much less popular then the first concerto. The second movement is absolutely inspired and deeply sincere. It’s unusual because Tchaikovsky makes beautiful use of the solo violin and cello. Actually the movement is almost like a trio with orchestra, which is very different. The last movement is absolutely delicious. It’s balletic and it’s a romp with wonderful material.

The first movement has interesting material but the thematic structure is not as romantic as the first concerto — although there are lots of sequences, which is typical for Tchaikovsky. In fact, that is where my initial reservations were. But once you put it all together it has an enormous energy, drive and effectiveness. And I can say that it certainly makes the pianist look good. Most virtuoso concertos do, but this seems to be particularly impressive.

An interesting thing I learned was that for some reason Tchaikovsky did not particularly like the sound of a piano playing with an orchestra, isn’t that a strange one?

GO: In the first concerto he gives the pianist a massive cadenza and lots of solo spots and in this concerto he does even more, especially in the first movement, where he gives the piano a cadenza which is about five minutes long. He also writes a two-minute semi-cadenza as well as three or four extended solo passages. This all results in the piano being left alone for maybe eight or nine minutes during the movement, which is quite long.

It’s brilliant writing and unlike Brahms, when Tchaikovsky gives you something difficult to play it sounds incredibly difficult as well, so it’s very gratifying. Even though he was not a great pianist himself or even a great writer for the piano in the sense of Liszt or Chopin, the piano writing is of astounding brilliance. So , as I say, it makes pianists look very good if we can play it. I’ve now played it in three different cities and I have had great pleasure with it.

MT: How long did it take you to learn it?

GO: Oh, gosh I don’t know. I never know the answer to that question because of course I don’t just sit down and learn it until I’m finished; there is so much else going on in life. I first read it through carefully last February. I don’t want to boast, but it didn’t take that long. It is difficult but generally if you see an arpeggio that starts and ends in G major it doesn’t have fifteen non G-major notes in it. So that makes it easier to read as opposed to, say, Rachmaninoff, Scriabin or Prokofiev where you see lots of notes going up the piano and you have to figure out each note’s relationship to the other. So in that way it’s more traditional.

MT: It must be fun to learn a new piece like this.

GO: It is! One of the things people often ask me is how can you play the Rachmaninoff Third Concerto one week and the Brahms SecondConcerto the next? But the truth is that when you are in conservatory learning one of these concertos, you do spend most of the year learning it with your teacher. And of course you’re still learning how to play the piano while learning music as well, so it is very complicated. But I promise that once you’ve performed a concerto a couple hundred times with orchestra it does become a lot easier.

Of course this Tchaikovsky is new to me, but if you think of a standard repertoire piece like the Rachmaninoff Third, I probably have played it two hundred times with orchestra. Once you’ve done it that many times you are kind of hard-wired in a way that you can never not know the piece. You have jumped the hurdles so many times that you have the knowledge inside of you that assures you that you can do it. And when you first play a piece you don’t have that knowledge.

I can tell you that when I first played the concerto this fall I had the experience of remembering what it is like to be a young pianist, and your heart starts going into your throat. But now it feels like I have done the piece all of my life.

MT: Did you learn it from score?

GO: Yes, absolutely! I didn’t learn it well enough to conduct it. I’m not a conductor, but I do want to know which instruments are playing what and where. It is critical to your sense of well-being especially when a piece is new. You do need to know in the deepest sense what is going on in terms of phrase structure. For example, in the end of the second movement the piano becomes obbligato with the orchestra, it doesn’t have the lead in any way so you have to know whether that triplet figure is in the horns or the trumpets. I know from long experience that knowing these things will help me play it better. In other words, when I am part of the ensemble I need to know what the ensemble is doing.

So yes, all those piano teachers are right: study the thing from the score. It’s not just something the teacher is making you do because they want to, it actually makes you more secure and makes you aware of where you are in the phrase. I find it’s really quite essential.

If you have to miss Garrick Ohlsson’s Cleveland Orchestra performances this weekend, you have three additional opportunities to hear him. On Friday, January 11, ChamberFest Cleveland will hold a benefit concert featuring Ohlsson, as well as violinist Diana Cohen and Cleveland Orchestra principal clarinetist Franklin Cohen (see our concert listings for more information) On February 12, Ohlsson will make his Oberlin Artist Recital Series debut in a concert rescheduled from last fall, and he returns to Cleveland to join the TakácsQuartet on March 19 in a concert presented by the Cleveland Chamber Music Society.

END_OF_DOCUMENT_TOKEN_TO_BE_REPLACED

Rodgers & Hammerstein’s Cinderella was originally produced for television in 1957 — seven years after the animated Disney film was released — and starred Julie Andrews. According to the Rodgers & Hammerstein website, it was viewed by over 100 million people. END_OF_DOCUMENT_TOKEN_TO_BE_REPLACED

The story line has its origin in an 1855 play and an 1842 farce that Thornton Wilder mined for his 1938 play The Merchant of Yonkers. When that turned out to be a flop, in 1954 Wilder made the crucial decision to re-center the show around the character of the legendary marriage broker Dolly Gallagher Levi and renamed it The Matchmaker. END_OF_DOCUMENT_TOKEN_TO_BE_REPLACED

The Dodero Center for the Performing Arts at the Gilmore Academy in Gates Mills is one feature of an impressive campus. The auditorium is shallow, the stage is deep, and the ensemble played without a shell. Throughout the program, the sound, especially in instruments’ lower registers, tended to disappear. END_OF_DOCUMENT_TOKEN_TO_BE_REPLACED