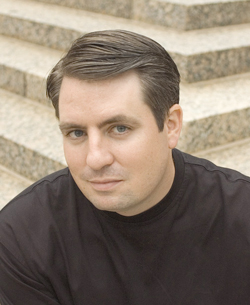 American lyric tenor Matthew Polenzani has been praised for the artistic versatility and fresh lyricism that he brings to concert and operatic appearances on leading international stages. Of his recent Metropolitan Opera performance as the young military officer Ferrando in Cosí Fan Tutte, Anthony Tommasini of the New York Times wrote, “[Polenzani’s] singing of Ferrando had Mozartean elegance along with exciting, tenorial ping. He brought honeyed sound and melting pianissimos to the sublime aria ‘Un’aura amorosa.’”

This weekend Matthew Polenzani returns to Severance Hall for three performances of Benjamin Britten’s Serenade for Tenor, Horn and Strings. I reached him on his cell phone in New York where he was experiencing a real life moment —yes, stars of the Metropolitan Opera do get stuck in traffic with their kids. But being the very down-to-earth and gracious Midwesterner that he is, when I ask him if he would prefer that I call at another time he responds, “No not really, now is as good a time as any.” I began by asking him when he first came to Britten’s Serenade.

Matthew Polenzani: I knew about it because I have enjoyed Britten’s music from the time I first became interested in classical music. And I was invited to sing it with Jeffrey Tate in Minnesota around 2000. That was the first time I performed the piece and I loved it. It’s great music, very descriptive and pictorial writing. It’s just beautiful and I’ve enjoyed it very much.

Mike Telin: When did you first discover classical music and opera?

MP: I would say that I first became interested in opera during the summer before my senior year at Eastern Illinois. I heard a recording by José Carreras and it was unbelievably beautiful. I loved it so much that I rewound it about thirty times. And that was the first time I would say that I was bitten by the bug.

Later that summer I met the great bass-baritone Alan Held who told me that I should think about going to Yale to study voice. That seemed a little crazy to me because I hadn’t really given it any thought, and I was already studying to be a high school choral conductor. But I thought I should try and if I make it, then I’ll be doing something that I enjoy and if not, it’s not a big deal because I also loved the idea of being a teacher and would have enjoyed that too.

MT: After Yale your career moved forward quite quickly.

MP: Well, after Yale I went directly into the Young Artist Program at Lyric Opera Chicago, and literally I went straight from there to the Met. Yes, it’s amazing, and that’s not the way it goes for most people. I was pretty lucky that everything worked out the way that it did.

MP: I actually received two of their awards, their career grant and then I won the Richard Tucker award itself in 2004 and that was a very big feather in the cap.

MT: In more then one interview you have said that you have been careful to build your repertoire and career slowly over time: when did you know you wanted to take on the challenge of Werther?

MP: Oh wow, I had known that for a while. I loved the music and I knew that it was a natural progression for me repertory-wise, in terms of what I had been singing. I had sung Romeo, Damnation of Faust, Lakmé and Manon. Then I sang Hoffman and after that I knew it was time for Werther. It’s not such a far step from the regular repertoire that I am singing — I haven’t sung La bohème or Ballo, which are sort of the natural Verdi and Puccini steps or the next steps career-wise. But after I sang Werther I told my agent, you can look for this role anytime, anywhere. I am that in love with the music. I knew how beautiful it was, but it wasn’t until I was standing on the stage singing it that I really understood how much I loved it.

MT: How do you prepare yourself to sing the role of a character who is that complex, and so introspective?

MP: Somehow we have to figure out how to allow the audience to see what is going on inside the character’s head and inside your heart without compromising the quality of the vocal production. I like to say that in opera there are a couple of kinds of angst, love angst and anger angst. And I always say that with love angst, well I’m happy to do that all day. I love channeling that emotion and it makes me happy. Anger angst is a little bit different. It’s harder to keep your emotions under control while you are trying to sing.

Of course Werther is not an especially angry guy, he is more introspective. But what he goes through is a difficult journey as it would be for anybody. We’ve all met somebody who we fell in love with and when that love is not reciprocated — or even worse in Werther’s case, it seemed like it was being reciprocated, but in such a way that it became obvious that nothing was ever going to come from it.

But in the end it’s still an opera, it is an acting art form but it’s still the music that is driving the drama. So we do need to remain true to that as well.

MT: Thanks. I do enjoy hearing how opera singers, especially the younger ones, approach acting.

MP: Thanks for considering me young, and I do still think of myself as young. I have little children which also causes me to feel young. My kids are small and that’s an awesome thing.

MT: Well if you don’t mind talking about it, how do you juggle your family with your career?

MP: I don’t mind. The number one priority is having a willing and capable partner who can handle the family side for you. I do need to tell you that I am able to go out on the road because my wife is such an amazing parent. I wouldn’t be able to do what I am doing if she wasn’t incredible at what she does. I do think that in that case of the family it is harder for women then it is for men, especially when the kids are younger. Children need their moms. Not that they don’t need their dads. I know my kids need me but somehow it is a little bit different.

MT: That is very nice and thank you so much for talking. I do enjoy it when real life intersects with careers and business.

MP: I do too and it does give you a little better sense of who the person is. And in the time we finished talking I’ve packed a bag because I’m going to Chicago before I come to Cleveland. I’m singing the National Anthem for the Chicago Bears. I’m from there and I’ve done it a couple of times so it is fun for me to do. And between the Bears game and Cleveland I plan to go golfing with my parents and my best friends. It’s going to be nice. I hope I will get the chance to play a little golf when I’m in Cleveland too.

END_OF_DOCUMENT_TOKEN_TO_BE_REPLACED

Then, you heard all the qualities that make for a stunning soloist. Winner of the 2013 Cleveland International Piano Competition, Khristenko was back in town this month for a recital in Piano Cleveland’s summer series, Piano Days @CLE. And he couldn’t help but revel in the spotlight a little, even as he settled into a more collaborative role at the keyboard for his program, “Stanislav and Friends.” END_OF_DOCUMENT_TOKEN_TO_BE_REPLACED

Now, both pieces on Saturday might be called one thing, but they really sound like another. “Symphony” is a title that would fit Sergei Rachmaninoff’s Piano Concerto No. 2, as well as John Adams’ modern masterpiece for orchestra, Harmonielehre. END_OF_DOCUMENT_TOKEN_TO_BE_REPLACED

And the Orpheus effect has everything to do with who’s not onstage. The New York City-based group has rehearsed and performed without a conductor since its founding in 1972, and this means its members share the musical authority that typically rests with one person. Multiplied by a dozen or so, the interpretation of a piece suddenly emanates from every player, from the concertmaster to the double bass, resonating with a kind of collective power. END_OF_DOCUMENT_TOKEN_TO_BE_REPLACED