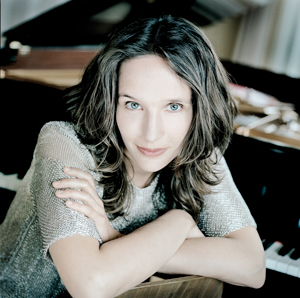 The allure of performing in a natural setting made a strong impression on French-born pianist Hélène Grimaud in 1990 when she made her United States debut in the Schumann concerto at Blossom with The Cleveland Orchestra under Jahja Ling. “I was always fascinated by the US before I first stepped foot here,” she told us in a telephone conversation, “but once I did at Blossom I was so taken by everything. I was utterly charmed. Of course that fact that The Cleveland Orchestra is so magnificent was a big part of that, but it was also the warm hearts of the people and the entire team. The whole experience was really a turning point for me and the great acoustics changed my mind completely about performing in open air venues.”

Grimaud now splits her time between New York and London. She will return to Cleveland this weekend to join conductor Fabio Luisi in three indoor performances — the opening concerts of the Severance Hall season — programs that include Beethoven’s Piano Concerto No. 5 (“Emperor”). The performances will be something of a reunion for pianist and conductor. “I have worked with Luisi many times,” Grimaud said, “and we toured this concerto with the Staatskapelle Dresden. I am particularly happy that my return to Cleveland with be with a colleague like him.”

Interestingly enough, Grimaud only recently warmed to the fifth Beethoven concerto. “It’s funny because for quite some time I was sort of circumspect about it because #4 was such a close friend. I was sure I would never have that same feeling about #5. I couldn’t really get past the martial quality of the music but of course this was wrongly perceived. It was because of that term ‘Emperor’.”

Because Grimaud feels a special relationship to Beethoven and performs his music frequently, at a certain point it was unthinkable for her to continue avoiding the ‘Emperor’. “When I finally got around to doing it — apart from the second movement which is sublime and which I always loved before I began to play it — I discovered that the outer movements represent the epitome of Beethoven’s belief that the human spirit is always capable of transcending the misery that is inherent to its condition. There is something so exhilarating about the music in the deepest sense possible. It infuses you with energy on a bipolar level. There is a sense of hope that everything is possible and that’s really the power of that music. It was a pivotal moment when I realized that, and I became as much of a fan of this piece as I was of #4.”

As much an environmentalist as she is a musician, another pivotal moment in Grimaud’s life came when she had a chance encounter with a wolf in Florida. That experience led her in 1997 to buy six acres in New York’s Westchester County and establish a wolf conservation and education center. The center, which partners with the U.S. Fish and Wildlife Center and the ADA, houses sixteen Mexican wolves — about a third of that species that exist in the United States. Her passion for those animals is documented in the 2009 film, Living with Wolves.

“I am still enjoying the conservation center very much. The wolf center is one of the main reasons I decided to come back to the US. I’m so incredibly proud of what the center has accomplished over the years. It’s a great source of satisfaction and joy. I believe there is no long-term hope for conservation without education. The main obstacle to large predators surviving is human tolerance or the lack thereof. Working with some of the most endangered species – the Mexican wolf and the red wolf — with the goal of making sure the populations do not become extinct and reintroducing some animals into their original habitat: there is nothing more exciting then that.”