Details are now in place for the inaugural neighborhood residency of The Cleveland Orchestra, which will find the Orchestra and members of Severance Hall ensembles engaging the community in numerous activities ranging from performances to a soccer match in the Gordon Square Arts District on Cleveland’s West Side from May 11 through May 17.

The full Orchestra will play a free evening concert (now sold out) and a morning educational concert at St. Colman Church under assistant conductor James Feddeck. A special City Club forum will discuss the impact of arts and culture on neighborhood development.

Other performances include a variety of Cleveland Orchestra soloists and ensembles performing in Gordon Square cafés, wine bars, a health campus, galleries and food stores as well as in La Sagrada Familia Church and Cleveland Public Theatre.

Other activities include a Capitol Theatre screening of part of the Orchestra’s Bruckner Fourth Symphony Performance at St. Florian Abbey and that neighborhood soccer game, which will involve seventeen Orchestra musicians and staff and young people from the neighborhood.

The Cleveland Orchestra at home in Gordon Square

All events are free and open to the public. The Cleveland Orchestra’s evening performance at St. Colman is now “sold out.” 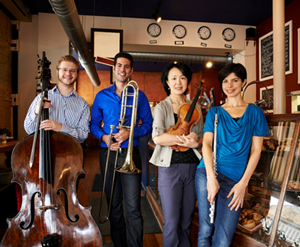