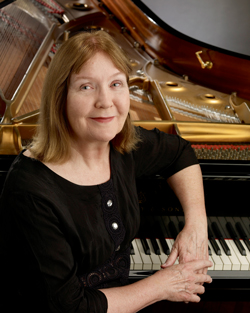 We continue our coverage of the Kent/Blossom Music Festival with an extended conversation with pianist Joela Jones. On Wednesday, July 17 beginning at 7:30 p.m. in Ludwig Recital Hall, Jones will be joined by violinists Ying Fu and Jeffrey Zehngut, violist Stanley Konopka, cellist Richard Weiss, oboist Danna Sundet and bassoonist Barrick Stees in a program that features de Falla’s Suite Popular Española for Cello and Piano, Poulenc’s Trio for Oboe, Bassoon and Piano and Elgar’s Piano Quintet in A minor.

On Wednesday, July 24 beginning at 7:30 p.m. Jones will return to the Ludwig Recital Hall stage along with Cleveland Orchestra First Associate Concertmaster Peter Otto in performances of Lutoslawski’s Partita for Violin and Piano, Nielsen’s Praeludium and Theme with Variations, Kapustin’s Omaggio a Giovanni Paisiello, Two fantasies on thematic fragments from the string quartets for violin solo and Grieg’s Sonata for Violin and Piano in C minor.

As her biography states, Joela Jones is an artist of exceptional versatility. As principal keyboardist of The Cleveland Orchestra, Jones can be heard playing piano, organ, harpsichord, celesta, synthesizer, and accordion. She has performed over fifty different concertos in more than 200 performances at Severance Hall and Blossom Music Center as well as on tour in Europe and Asia.

During our conversation, Jones spoke fondly of her orchestra colleagues and shared her opinion as to why members of the orchestra are also such great performers of chamber music. She shared some memories of her time as a student at the Kent/Blossom school and how she approaches the teaching and coaching of young professional musicians. We began by asking her how long she has been on the faculty of the Kent/Blossom School?

Joela Jones: I was thinking that you might ask me that, and I believe it’s between twelve and fifteen years. If you were to sit down and list all of the chamber works that have been done it would be a tremendous list. And how wonderful for the young musicians who have done great jobs with them all.

We’ve had some absolutely wonderful students, and many I can’t really call students because many of them are already young professionals. I have been especially happy with the pianists who have come to study and some of them have [chosen] to return for a second year. This year we have one returning and three first-year pianists.

Mike Telin: Have there always been four pianists accepted each summer?

JJ: We have gone from having only two pianists to four because the program has grown so much and all of the string and wind players get to perform works with piano as well as quartets, quintets and trios.

MT: You have some very interesting repertoire planned for this summer.

JJ: It’s a large repertoire that includes pieces that aren’t performed as much. Naturally there’s the Schubert Trout and the Schumann Piano Quintet, but we’re are also doing the Borodin Quintet, a piece by Schnittke and the Arensky Trio. So there are some lesser known works as well. I’m of course speaking of just the works that use piano.

MT: When I was speaking with David Shifrin, he said that he felt that summer festivals like Blossom were really more like apprenticeships.

MT: How do you approach students who are coming in, to a great degree, already formed with regard to technique and interpretation?

JJ: A lot of the pianists will ask me how to go about learning technical passages quickly. Even though many of them have studied for a long period of time, they are now getting to a point where they have to learn pieces in a short period of time, unlike when they were young and they had more time to learn a piece.

When you have a lot of time to work on something in a leisurely manner it’s wonderful, but unfortunately the more professional you become a lot more music is thrown at you. And you also take on more yourself as well, so the problem of learning things faster does comes into play. So I try to help the pianists by giving them shortcuts to learning technical passages. It’s all about the way that you practice. You can learn a piece of music much faster if you are more economical with your time.

MT: Regarding the interpretation of a piece, sometimes young musicians can be a little opinionated about how a piece should be played.

JJ: When I’m coaching a group at Kent/Blossom I have a great deal of respect for their wishes and wants. After all, music is an interpretive art and it’s all a matter of opinion, and we all have different feelings about things. So if the group as a whole feels very strongly about a tempo or interpretation, even if I would do it differently, I would never try to change them.

I do offer them alternatives, because often they have not thought about different options. But sometimes they do come with ideas already ingrained in their systems as to how they want to approach something.

Many coaches do ask them to try something different, but if they are not convinced of it and they need to do it their way, then we need to appreciate and respect what they want to do.

MT: As a wind player, I always found it exciting to have the opportunity to be coached by someone other then a wind player because you do learn in such a different way.

JJ: Exactly! for instance when I first joined the orchestra I learned so much from others. Over the years I have learned so much from string and wind players. For example you learn about breathing. Very often we pianists hold our breath when we come to a difficult passage, whereas if a wind player did that they wouldn’t be able to play.

You also learn to think in terms of bowings and I try to relate this to pianists and make them more aware of that when they are working with string players. I tell them to listen to the phrasing — listen to the breathing and to pay attention to the bowing and articulation and to try to match it on the piano.

Another thing is that when I was a young student there were not the big collaborative programs like there are today and unless you would seek out a violinist, cellist or wind player to accompany or play in an ensemble with you, you could end up sitting in the practice room all day by yourself. I remember being jealous as a student that string and wind players got to play in groups and have the camaraderie of making music together. That’s another reason why summer music festivals are wonderful — because pianists do get the opportunity to perform with other musicians.

MT: You also attended Kent/Blossom as a student.

That was a phenomenal opportunity and I played with some wonderful musicians. Many of them have gone on to play in major orchestras, and I’m sure that is what will happen to many of the string and wind players who are at Kent this summer.

MT: You’re performing on two upcoming faculty programs, tell me a little about each of them.

JJ: When we first put the July 17 program together somebody said, Oh, Spanish, French and English music — so what is the connection? Many people know the deFalla Seven Popular Songs, but the Elgar is a fascinating piano quintet which a lot of people have not heard and so it is not thought of as a major piano quintet, like the Dvořák, Brahms and Schumann.

Elgar wrote the piece during the summer while he was staying at a cottage in Suffolk, England and he would take walks, like many composers, to get inspiration. There were three trees in a park that had been struck by lightning, they were knurly and blackened and there was a legend in the village that the Spanish monks had come over in medieval times and founded a monastery, but they had gone against God. He struck them with lighting and the three trees were the monks. This fascinated him so the piece opens very ghostly, almost like a plainchant, and then later he writes a pizzicato passage that sounds like a guitar, so you have these Spanish influences in the piece.

I have never played the Poulenc Trio and we just noticed the other day that the piece was dedicated to de Falla. And de Falla began writing the seven songs while living in Paris. So you do have a connection between the three composers, some of it planned and some a delightful surprise.

An interesting thing about the de Falla is that he wrote them to be sung but when they were transcribed for violin and then for cello only six were used. But Richard Weiss has added the seventh and put them back into their original order.

MT: All three pieces are great and I really love the July 24 program.

JJ: Peter and I played the Lutoslawski just a few months ago and he played the Nielsen on that same program. And the Kapustin and the Grieg are great pieces as well.

I’m so honored to be able to perform with all of my colleagues. They are such great players and we certainly enjoy playing together in ensembles very much. I think Cleveland Orchestra players, when playing in ensembles have an advantage over groups who are put together from various walks of life no matter how great they are as musicians. Because there is a tradition going back to the Szell era — he trained everyone to play as a large chamber group. So there’s always that mentality, that approach to music in the orchestra. Even though now there are very few people in the orchestra who were there under him, that tradition has been passed down to the newer people. And I think we have a real advantage because of that.

END_OF_DOCUMENT_TOKEN_TO_BE_REPLACED

Supported by engagingly, yet simple staging by Cara Consilvio, a well-prepared cast of singers told the archetypal story of Cinderella with charm and flair. Framing the production was  a sparse but colorful set and wonderful lighting by Dave Brooks. END_OF_DOCUMENT_TOKEN_TO_BE_REPLACED