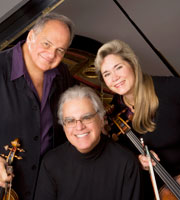 Now that two-thirds of the celebrated Kalichstein Laredo Robinson Piano Trio are in residence at the Cleveland Institute of Music, there are more opportunities to enjoy hearing them perform locally. On Wednesday, April 17 at 8 pm, the KLR Trio will join Carl Topilow and the CIM Orchestra in Beethoven’s Triple Concerto in the orchestra’s final performance at Severance Hall this season.

Last year before the Trio appeared on the Mixon Masters Series, we enjoyed the opportunity of speaking to pianist Joseph Kalichstein about the group’s long history, which began with a gig at an inauguration reception for President Jimmy Carter thirty-five years before (read the interview here). This time, we reached violinist Jaime Laredo and his wife, cellist Sharon Robinson for a joint conversation at their home in Shaker Heights — just as a contractor was leaving.

“We bought this gorgeous, gorgeous old house that we love,” Laredo said, “but there are a million things going wrong all the time.” “A boat would be worse,” Robinson sighed. “We’re three doors down from where George Szell used to live,” Laredo continued. “The first day I walked by his house my stomach turned into a knot like it always used to!”

Before moving to Cleveland, Laredo and Robertson were on the faculty of the Jacobs School of Music at Indiana University. The move from Bloomington has reminded them of the positive features Cleveland has to offer. “I love the school,” Laredo said, “I love my colleagues and I have to say I love Cleveland. It has so many things going for it.” “No. 1,” says Robinson, “is the Cleveland Orchestra.” No argument there from Jaime Laredo. “It’s staggering how they play everything like chamber music; everybody watches and listens to each other.”

The move to Cleveland has also put Sharon Robinson closer to her cellist brother, Keith (aka Robbie), who teaches at Kent State University and plays with his wife Kathy Meng Robinson in the Miami String Quartet. In fact, the KLR Trio and the Miami Quartet got together last week for a benefit concert at KSU for Kent/Blossom.

“Sharon’s whole family are musical”, Laredo said. “Her older brother is principal bass in Philadelphia and teaches at Curtis, her two sisters are both violinists and her parents played in the Houston Symphony under Stokowski. I on the other hand am the black sheep in my family, though my parents were great music lovers. My father knew a lot about music and took me to my first concert where I fell in love with the violin.”

How did Laredo and Robinson meet? Playing a concert, naturally, on Leon Fleischer’s chamber music series in Washington D.C. when Robinson was at Peabody. “Sharon was still a student, but I realized what an amazing talent she was and suggested that the Marlboro Festival would allow her to blossom. She did go a couple of years later and we played in a group together forty years ago. The rest is history!”

One of the things that attracted Sharon Robinson to CIM was the possibility of starting an advanced piano trio program in Cleveland, something that wasn’t in the culture at IU. “When we decided to move, I asked Joel (Smirnoff) about it and he immediately expressed interest.” Now the APTP is completing its first full year and has been a signal success. “We auditioned pre-formed groups. It’s always better when people have worked together already. We spent the first semester on Beethoven trios and the second on Mendelssohn and Dvorak. The students play a lot both in outreach concerts and a gala performance at the end of each semester. The next one is on April 23.” In addition to Robinson, each group has a pianist-coach (either Anita Pontremoli or Kathryn Brown), and guest coaches do special seminars from time to time.

Jaime Laredo is taken with the results. “The December concert was pretty amazing. I couldn’t get over the level of focus and passion the kids put into it. They were really playing like a group in a short time.” Sharon Robinson notes that the primary goal with Beethoven was to get the trios to respect what was in the score. “He put down everything he wanted and if you can do that, you’re way ahead of the game. For Dvorak and Mendelssohn, it’s important to try to vary the expression, something the ensembles haven’t done so much as a group before.”

Students will learn a lot from watching the KLR Trio in action with the Beethoven Triple, which presents the additional challenge of playing with an orchestra. “Maybe half of the kids in the orchestra have never heard the piece and the other half have never played it,” Laredo says. “They’re used to watching a conductor, but now they’ll have to watch and listen to the trio as well. It’s going to be a really terrific experience for them.”

END_OF_DOCUMENT_TOKEN_TO_BE_REPLACED

Rodgers & Hammerstein’s Cinderella was originally produced for television in 1957 — seven years after the animated Disney film was released — and starred Julie Andrews. According to the Rodgers & Hammerstein website, it was viewed by over 100 million people. END_OF_DOCUMENT_TOKEN_TO_BE_REPLACED

The story line has its origin in an 1855 play and an 1842 farce that Thornton Wilder mined for his 1938 play The Merchant of Yonkers. When that turned out to be a flop, in 1954 Wilder made the crucial decision to re-center the show around the character of the legendary marriage broker Dolly Gallagher Levi and renamed it The Matchmaker. END_OF_DOCUMENT_TOKEN_TO_BE_REPLACED

The Dodero Center for the Performing Arts at the Gilmore Academy in Gates Mills is one feature of an impressive campus. The auditorium is shallow, the stage is deep, and the ensemble played without a shell. Throughout the program, the sound, especially in instruments’ lower registers, tended to disappear. END_OF_DOCUMENT_TOKEN_TO_BE_REPLACED