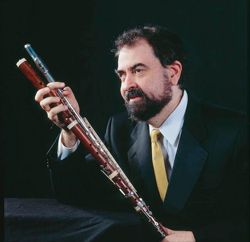 “I call this Life 2.0 or ‘Michael is back!’” exclaimed Oberlin Conservatory Baroque Flute and Recorder Professor Michael Lynn during his miraculous recovery from debilitating liver disease following an organ transplant at the Cleveland Clinic earlier this year.

Lynn, who has taught at Oberlin for 36 years and served as its associate dean for technology and facilities and curator of musical instruments, received a diagnosis of liver disease eight years ago and was placed on a transplant waiting list. Because his “numbers” were so good at that point, his wait would turn out to be a long one. But after he developed encephalopathy and diabetes and had to take a medical leave from Oberlin, the situation soon became critical.

Last October 2nd he got “the call” and suddenly found himself the recipient of a donor liver. Things quickly went straight uphill for him. “The good stuff happened very quickly after the transplant”, he told us on his cell phone from his back yard in Oberlin. “The liver disease had the ‘side effect’ of sending toxins — mainly ammonia — to my brain and that caused all sorts of problems including not being able to perform for almost four years. What was amazing is that I could already tell in the hospital that I was going to be able to play again because my brain knew how and my coordination was coming back. When I got back home I was pretty beat up, but I immediately started noodling around on the recorder and that showed me I could play just fine. Since then I’ve played four concerts and it was totally easy.”

While still in the hospital, Lynn came up with the idea of giving something back to The Clinic for his new lease on life. “I thought of coming down and playing in the lounge, but then I thought, ‘I can put together a big concert and turn it into a benefit.’” That event will take place on Saturday, May 11 at 8 pm, when Lynn has rented Gartner Auditorium at the Cleveland Museum of Art for a benefit concert for the Ex Vivo Liver Profusion Project at Cleveland Clinic. “It’s very cool,” Lynn says. “It’s like a heart-lung machine that keeps a liver alive outside the human body and actually allows doctors to strengthen or pep up an organ bigtime within 24 hours. It could save the lives of everyone who is on the transplant list but die because they can’t get an organ.”

Lynn will perform along with several members of Apollo’s Fire, including Jeannette Sorrell, members of the Oberlin Conservatory faculty and students and his daughter, Sarah, a soprano who will enter the conservatory in the fall. The program includes Telemann’s Concerto in e for recorder and baroque flute (with Kathie Stewart) the Concerto for recorder and gamba (with Oberlin graduating senior Kate Shuldiner, and a Handel cantata for soprano, recorder and continuo. And in a bit of wry humor on Lynn’s part, a performance of Marin Marais’s 1725 program piece, The Bladder-Stone Operation, both narrated and played by Apollo’s Fire cellist and gambist René Schiffer. “He’s such a funny person,” Lynn says, “and he loves to be a ham. We’re hoping to use a slightly ‘doctored up’ version of the story with modern medical touches like being asked for your birthdate and insurance card five hundred times.”

Lynn is hoping to have all the costs of the benefit covered by donations so that all proceeds can go to the Clinic. The Nord Family Foundation is a partial sponsor for the evening. “This is also part of a long-term plan to set up a foundation to present benefit performances for charities, usually of a medical origin,” Lynn says. “I’ve been talking to the Liver Foundation and the Juvenile Diabetes Foundation. There are a great number of talented people who are very generous with their time. For this concert I was able to get all of my first picks of players.”