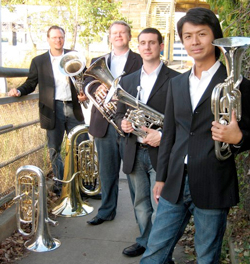 River Bottom Quartet is comprised of members of the euphonium and baritone horn section of the acclaimed Pittsburgh-based River City Brass. “The quartet is surprisingly capable of producing a variety of sounds,” says River Bottom Quartet member Matthew Murchison. “Some of the guys will double during the performance so for example I’ll play tuba and a couple of the guys will play trombone.” The moment I heard some of the quartet’s music and met Matthew I knew we had to have them on the series” says Jane Berkner of Music by Nature.“They’re a fantastic group and very funny.”

The group has been playing together as a quartet for the past five years and their musical goal is to present entertaining pops-style programs. “We’ll be playing a couple of Piazzolla tunes, a march and some arrangements of folk songs that I made for the group,” says Murchison. Sunday’s program also includes the music of classical composers such as Bach and Grieg, some Latin tunes as well as jazz standards. “There’s a lot of variety and something for everyone.” Murchison adds that the only thing you will not find on the program are original compositions for euphonium quartet. Why? “We want the audience to have a good time,” he says jokingly.

He does one become a professional euphonium player? Murchison says he began playing euphonium in the sixth grade in his home state of Arkansas, “I didn’t know what it was when I agreed to play it. But I said, sure, why not, so that’s how I started.” Although he did admit that the opportunity to play the euphonium came after a brief and unsuccessful attempt at playing the trumpet. He added the tuba in 2006 as a way to “make myself more marketable in the free-lance music scene.”

Matthew Murchison began his musical undergraduate studies at Duquesne University and followed his teacher to the University of North Texas. During his final year there was an opening in River City Brass, and he took the audition and won. “It’s all worked out well, I think.”