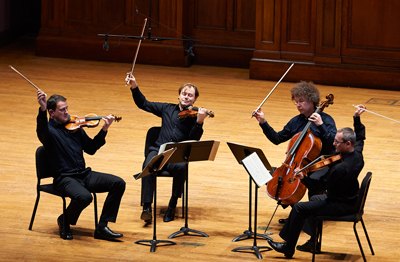 all of the exceptional repertoire to choose from, why is it that an all-Beethoven string quartet recital still excites audiences and players? “The quartet has performed a lot of complete cycles of composers such as Mendelssohn and Brahms or Mozart, and if you compare the possibilities, you have to realize that Beethoven is the top of the top,” says Leipzig String Quartet cellist Matthias Moosdorf. The quartet, who are currently touring seventeen Beethoven quartets, will perform a concert on Sunday, March 3 at 4:00 pm in Finney Chapel at Oberlin as part of the Oberlin Artist Recital Series.

“You can combine any piece with another and it works perfectly, especially when taken from the early, from the middle and from the late periods’” Moosdorf said in a phone conversation from Leipzig. “But it doesn’t matter which quartets you choose because in the end, the result will be a fantastic evening.” Moosdorf will be joined by his Leipzig colleagues Stefan Arzberger & Tilman Büning, violins, and violist Ivo Bauer, in performances of the Quartet in B-flat, op. 18, no. 6, “La Maliconia”,Quartet in f, op. 95,“Serioso” and the Quartet in E-flat, op. 127.

Founded in 1988, the Leipzig String Quartet is one of the most exciting string quartets on the international chamber music scene. The Neue Züricher Zeitung called them “one of the towering and most versatile quartets of our time.” And The New York Times wrote “if there is a Leipzig sound, this is it!”

But back to Beethoven. I asked the very friendly and conversational Moosdorf if he thought Beethoven was foreseeing the future of music with his late quartets? “I would say yes. If you look at the latest quartet, opus 135, you’ll find his art of composing one hundred years later in the music of Anton Webern, Alban Berg and Schoenberg. [Beethoven] divides the melody among the four instruments. Each instrument is just playing three of four notes, which means one detail of a complete melody, and that melody is completed only if the four instruments play their details following each to another. And during the time of Beethoven that was very unusual.”

Moosdorf compares Beethoven’s writing at that time to Goethe’s Faust. “I think you know the story that the second part of Faust was sealed by Goethe for fifty years because he realized that the time was not right to publish it. Sometimes I think it takes a lot of time for people to realize the gifts that the late quartets really were to the chamber music world.” He goes on to say that the first performance of opus 127, the same late quartet the Leipzig will be performing in Oberlin, was a disaster. “[At the time] it was completely unthinkable that a string quartet, after only two or three rehearsals could sit on stage and play that kind of piece. They repeated the first performance, but that time they had ten or more rehearsals, and it worked. [Everyone] was surprised that you need a completely different [mindset] to understand what is going on in the world of chamber music when it comes to the late Beethoven quartets.”

Prior to forming the group, three of the members of the quartet served as principal players in the Leipzig Gewandhaus Orchestra. And since the group’s founding there has been only one personnel change. So why did they decide to leave their secure positions in the orchestra? “At that time we would been unable to combine the two. The orchestra played the opera, the symphony season, and they also played at the St. Thomas Church. It was a very busy schedule and if you wanted to do something with chamber music you needed to decide,” Moosdorf said, jokingly adding that the day has only twenty-four hours. After winning a few international competitions such as the 1991 International ARD Munich competition and the Busch and Siemens prizes they decided to dedicate themselves fulltime to the quartet.

What does Moosdorf think has been the secret to the quartet’s longevity? “[laughing] This is the exact question I asked Martin Lovett from the Amadeus Quartet, and his answer was very short: ‘Success helps [????]color us.’”

He thinks the same is true with the Leipzig. “It’s very interesting work. In the beginning you spend so much time [learning repertoire] but in the end you have the possibility to play it not just one time but maybe ten times around the world. You learn so much and you get so many special feelings in all the different concert venues. People react completely different in Japan, in Germany or in the United States. But in the end it’s always a kind of fun. Not the fun that we have from watching a movie, I mean it’s a special profession that we are able to enjoy.”

To conclude our conversation, I was curious to find out more about the Leipzig sound. “The only thing I can describe is that we came from the former DDR and there was a special way of teaching because all of the music academies were founded by important composers. For example, in Leipzig the academy is the oldest in Germany and was founded by Mendelssohn just for recruiting new members for the Gewandhaus orchestra. Of course all of the teachers came from that orchestra, and the students of course were going to the orchestra’s concerts. So they created their teaching styles and for a long time kept their special sound.” But he does think that things are changing. “When the Wall came down, the world changed and more and more orchestras are now international. On the first desks you have Chinese, Japanese, there is a big mix. Only in Germany and parts of Austria you can still find this old tradition between teachers and students that has been intact for a long time and maybe that special sound is a result of that.”

END_OF_DOCUMENT_TOKEN_TO_BE_REPLACED

The strings-only work by Berg has made relatively frequent appearances on the Orchestra’s programs. In 2021, the musicians recorded it for the In Focus series, and it appeared again on last year’s European tour. Friday’s rendition maintained the group’s characteristic light and effortless playing, each section blending as much as possible to echo the work’s original form as a string quartet. At fifteen minutes total, the piece is quite short, but the dense encoded musical meanings require some extra-attentive listening. Splitting up the three movements ensured that each one could be appreciated on its own. END_OF_DOCUMENT_TOKEN_TO_BE_REPLACED