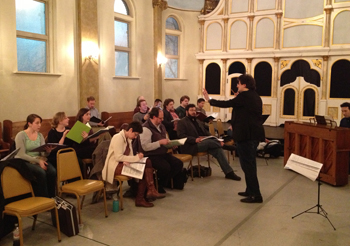 Opera Per Tutti Artistic Director Scott Skiba has one thing to say about this week’s performances of Puccini’s La Rondine. “I want YOU to come to the opera! If you’ve never been to hear opera, this is a great place to start,” Skiba exclaimed with enthusiasm during a recent telephone conversation. “There’s comedy as well as great drama, and Puccini’s music is beautiful. And, if you’re already a lover of opera, the production presents a rare opportunity for you to see one of his lesser performed works.”

On Friday, March 28 at 7:30 pm and Sunday, March 30 at 3:00 pm in Cleveland Public Theatre’s Gordon Square Theatre, Opera Per Tutti presents a fully staged production of Giacomo Puccini’s La Rondine. “This is our biggest production to date, and it really is ideal for anyone who is new to opera,” Skiba said, adding that he believes that opera is not about things that happened hundreds of years ago. “It is something that is timeless. It isn’t a story about what happened, it is a story about what happens.”

La Rondine (The Swallow) has an interesting history, and as Skiba points out, “it is Puccini’s experiment in writing operetta.”

In a letter to his Viennese friend and agent Angelo Eisner on Dec. 14, 1913, Puccini wrote, “An operetta is something I will never do,” citing that his operas have little if anything in common with that of the formulaic comic Viennese operetta. In spite of Puccini’s apprehension, he signed the contract and the three-act opera based on a libretto by Alfred Maria Willnre and Heinz Reichert was premiered on March 27, 1917 in Monte Carlo.

The opera tells the story of the courtesan Magda de Civry (Andrea Anelli) who falls in love with Ruggero (Timothy Culver), a young man from a proper family, with whom Magda neglects to be completely truthful about her past in order to win his everlasting affection — a decision that eventually come back to haunt her.

“Magda is a rich courtesan and it’s interesting to see her try to hold onto a choice she made in the past. But when faced with the purity of Ruggero’s family, she decides she cannot go through with the wedding, so it is a choice she came to regret,” Skiba said, adding, “it’s finding that very human moment that we all can resonate with, if only we could go back. Magda made her choice and the audience can invest in her journey.”

Skiba first became aware of La Rondine while serving as production manager of the Oberlin in Italy program. “Before I even researched its history I heard it and it struck me. Musically it has some of the best melodic writing which runs the gamut of Puccini’s music, but it’s also a great work of theatre. As a director, the challenge is to balance the traditional elements of operetta with those of opera. The music is amazing but I want to be true to the drama as well.” 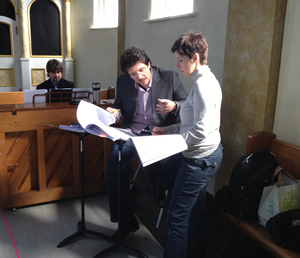 According to Skiba, not only does the production provide great music and great theater, it also serves as a perfect jumping-off point for a discussion about modern life. For example: have you ever been less than truthful in with your own Internet profile? “Friday’s performance is Cleveland Public Theatre’s Free Beer Friday. It’s an issue I would love to discuss with people after the show. Our goal is to get people to question what they would have done in the same situation: would I have continued the lie, would I tell him the truth, or walk away out of embarrassment?”

If you can’t come on Friday, Skiba invites you to come on Sunday and search him out afterwards. “I’ll buy you whatever you’re drinking and we’ll talk about it, because I want you to come to the opera. I want you to see how different opera is than what you think it is — that the story is relevant to your current life experiences. And it is something you want to come back and see again. I think this opera will cause all of those things to happen.”

The Cleveland Orchestra’s second performance of the new season on Sunday afternoon, October 17 at the newly renamed Mandel Hall at Severance Music Center was just such an occasion. If the ensemble’s return to public concerts under the baton of Franz Welser-Möst wasn’t enough reason to light a bonfire, the Cleveland debut of a new work written for one of the Orchestra’s most popular soloists, and the swan song of one of its longest-serving members added extra fuel to the celebration. END_OF_DOCUMENT_TOKEN_TO_BE_REPLACED

Cleverly, CityMusic’s latest concert led listeners through these changes one step at a time. “Musical Matrix” took transformation as its theme, and each piece on the October 2 program at the Maltz Performing Arts Center (the second of two performances) put its spin on the subject. END_OF_DOCUMENT_TOKEN_TO_BE_REPLACED