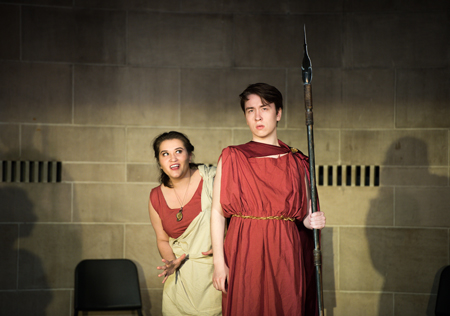 When talented young conservatory students are given permission to unleash their creativity, wonderful things can happen. A case in point is Jason Goldberg’s imaginative production of Henry Purcell’s Dido and Aeneas, which received area performances on April 15 and 16 at Fairchild Chapel on the campus of Oberlin College, and on April 17 at Case Western Reserve University’s Harkness Chapel (which I attended). From start to finish the production vividly captured all of the opera’s action, magic, love, and heartbreak.

A senior vocal performance major at Oberlin, Goldberg is also pursuing an individual major in opera directing. The production of Purcell’s seminal work in the English Baroque opera literature served as his final project for that degree. Performed by gifted vocalists from Oberlin’s opera department, the historically informed production included inspired choreography by CWRU’s Julie Andrijeski danced by students in her Baroque Dance Ensemble. The collaboration was the first of its kind in recent memory between the two schools. Read the background of the project here.

Based on Book IV of Virgil’s Aeneid, the opera recounts the love of Dido, Queen of Carthage, for the Trojan hero Aeneas, and Dido’s despair when he abandons her after witches interfere in their romance.

Singing with a warm, focused tone and tossing off embellishments with ease, Katherine Early was splendid as the widowed Queen of Carthage, her troubled soul in full evidence from the opening “Ah! Belinda.” Adam Wells, singing with a well-projected, mellow voice, portrayed the Trojan prince with a sense of naive charm. There was definite chemistry between the two characters — the glance they held before Aeneas finally abandoned Dido brought a heightened heartbreak to the scene. 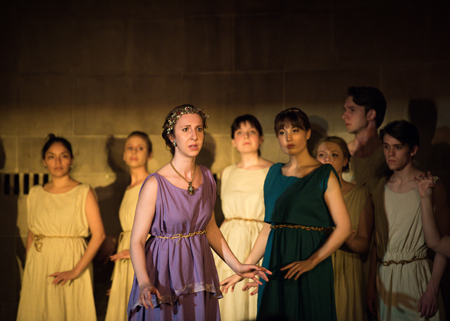 Sarah Larkworthy as Belinda, Dido’s sister and handmaiden, skillfully sang her lines during “Pursue thy conquest love,” and Christine Jay’s singing of the Second Woman’s aria was exquisite. Predicting Aeneas’ departure, Alexandra Bass deftly portrayed the Sorceress as the purveyor of all things wicked. Madison Schindele and Olivia Duncan’s witches were ominous, basking in their evil as they pronounced with an added hiss, “The Queen of Carthage whom we hate.” Matthew Straw brought an appropriate drunkenness to “Come away, fellow sailors.”

The superb vocal quartet sounded full-bodied during the choruses in their roles as members of the court, witches, and sailors. Overall, diction was good across the cast, although at times singers’ desire to produce beautiful tones trumped clarity.

The six-member dance ensemble’s unison movements were spot-on. A highlight was the raucous humor during the sailor’s dance. Andrijeski’s choreography and Goldberg’s staging were of a shared vision. Also serving the production well was Sonya Berg’s attractive costuming — togas, dresses, and sailor hats. 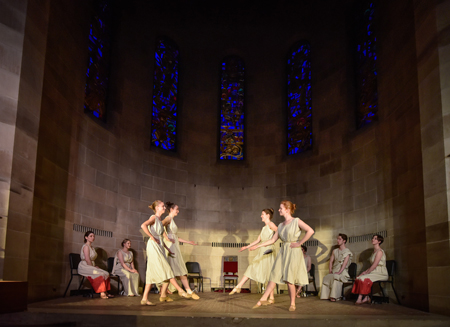 The period instrument ensemble sounded first-rate. Conducting from the harpsichord, Nicholas Capozzoli kept the action moving — it was never rushed but had no dead moments either. This was a very tight performance. Cellist Nick Loucks did an outstanding job with the tricky continuo lines.

Director Jason Goldberg made the most of every scene. Although the sets and staging were simple, he created a sense of place through the arrangement of a throne and chairs in a semicircle. His use of evil-looking masks was inspired. In the final scene, each character put on their masks one by one as they turned away from Dido, including her closest confidants, Belinda and the Second Woman.

Katherine Early’s delivery of the words “death is now a welcome guest” in “Dido’s Lament” was heart-wrenching. The final chorus faded as she walked down the center aisle, her long blood-stained train unfolding as she met her demise.

The good-sized audience rewarded the fine director and cast with a generous and well-deserved ovation.

Published on ClevelandClassical.com May 2, 2016.

END_OF_DOCUMENT_TOKEN_TO_BE_REPLACED

Supported by engagingly, yet simple staging by Cara Consilvio, a well-prepared cast of singers told the archetypal story of Cinderella with charm and flair. Framing the production was  a sparse but colorful set and wonderful lighting by Dave Brooks. END_OF_DOCUMENT_TOKEN_TO_BE_REPLACED