Bouvard is currently on a U.S. tour that began at Meyerson Symphony Hall in Dallas, continued with recitals and masterclasses at the University of Kansas, and after Cleveland, will end with a recital at the Maison Symphonique in Montréal. Due to language issues, in lieu of an interview, we sent M. Bouvard some questions by email to which he has graciously responded.

Daniel Hathaway: You divide your time between the Paris Conservatoire, St. Sernin in Toulouse, and the Royal Chapel at Versailles. What are your duties in each of those positions?

Michel Bouvard: I live in Toulouse, a beautiful city in the south of France, very pleasant and sunny! My principal work is divided between teaching and concerts. I teach eight hours on Monday and Tuesday in the Paris Conservatory in collaboration with my friend Olivier Latry (I fly back and forth every week) and also eight hours in the Toulouse Conservatory, in addition to two hours in the Institut Supérieur Des Arts de Toulouse, where I collaborate with my colleagues Willem Jansen and Stephane Bois.

In Paris we have ten high level students, and in Toulouse we also receive a lot of foreign students in the “perfectionnement” phase of their studies, as Erasmus (European Exchange), or quite regularly, Americans with the Fulbright program. Those students are also high level, and they come to Toulouse generally for one or two years to work with us on the famous collection of historic organs of Toulouse: the Cavaillé-Coll of St Sernin, the Ahrend organ of the Augustins Museum, and the Puget organs — very beautiful French Baroque organs. I have very good memories of the time that people like Nathan Laube, Caroline Robinson, Chelsea Barton, Kathy Minion, and Katelyn Emerson spent here.

I also play about 40 concerts per year, mostly in Europe, North America, and Japan.

At St. Sernin, I play for Masses one Sunday per month (sometime two when I can). Some colleagues — former students — are also organists there with me. They play for the other Sundays.

At Versailles, four organists share the duties, and there is only one Mass each month in the Royal Chapel. We also play monthly “conferences-concerts” for a small audience of about 50 people who sit close to the organ. We play and explain French Baroque music of the 17th and 18th centuries.

DH: You have distinguished instruments both at St. Sernin and Versailles. The Cavaillé-Coll in Toulouse was rebuilt just before you became titular, and the Versailles instrument is a reconstruction of the 1711 Cliquot. Tell us about the character of those instruments and what you enjoy about them?

MB: I am incredibly lucky to play regularly two such fantastic organs. And I can say that over the years, I have learned a lot from these marvelous “teachers.”  The Cavaillé-Coll is perfect for understanding all the French symphonic music from Franck to Tournemire, via Widor, Guilmant, and Vierne, but also for Messiaen. It works a little less well for “neo-classical” music like Duruflé or Alain, but the organ is so beautiful that you could play a lot of music on it — even Bach with a “romantic sauce.” When I say that such an instrument is like a teacher, that is true, because it can help you understand the writing of the composers of this time, along with the colors of the registrations, the balances, the contrasts. You can immediately understand what “legato” means, and how to control the sound, the tempo and the touch in a big acoustic. It’s just incredible what you can make musically with such a race horse. It’s like playing on a Stradivarius for a violinist.

It’s the same with Versailles in a different esthetic. The organ is an excellent reconstruction by Bertrand Cattiaux of the Clicquot organ from the time of Louis XIV. There you can play perfectly the music of Couperin, Marchand, Grigny, Clerambault etc. The mechanism makes it easy to play ornaments, and the organ permits specific registrations (Plein-jeu, Grand jeu, Tierce en taille, Basse de trompette etc). Versailles also has a big acoustic — and a French-style pedalboard. 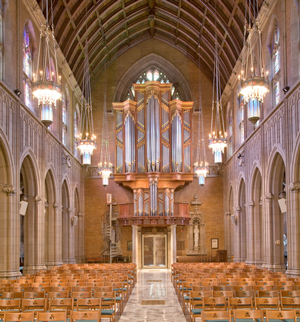 DH: Your varied program in Cleveland ranges from French Renaissance music to French, North German and Dutch Baroque pieces, then on to arrangements of Mendelssohn and Bach. How do you choose your repertoire?

MB: First I choose pieces that I hope will sound good on a specific instrument. Then I like to play a varied program — naturally including French music, but also music I particularly like, with the desire to transmit to the audience my feelings both in the case of masterpieces, but also of lesser-known pieces that I consider really beautiful — even sometimes fabulous.

DH: Reitze Smits’ arrangement of Mendelssohn’s Variations serieuses seems to be very popular. What makes this piano piece so suitable for the organ?

MB: I think I was one of the first, 20 years ago, to play this genial transcription by my friend Reitze Smits in concert. Afterwards, a lot of my students asked me for the music. I love to play this piece, but sometimes when I propose it, an organizer will tell me, “Sorry, we already heard the piece last month.”

Its success comes first from Mendelssohn himself — it is his masterwork for the piano — but also from the fantastic work of Reitze Smits to adapt the piano writing for the organ. We can find several transcriptions of this piece, even in Mendelssohn’s time, but for me the version of Reitze Smits is the best. Except for the last variation, which is very pianistic, the work really sounds like an organ piece, and for me, is superior in inspiration and on a higher artistic level than his organ sonatas.

DH: The Bach Concerto is especially interesting — Isoir’s arrangement for organ of Bach’s arrangement for four harpsichords of a Vivaldi piece originally scored for four violins! Can you still hear four distinct soloists in the organ version?

MB: As in the previous question, all the success is the work of the transcriber, here André Isoir, the great French organist who was my teacher 40 years ago — he died in July of 2016, so playing the piece is also a hommage of mine. Naturally, it is just impossible for one performer to play all the notes of four harpsichords plus orchestra, but in Isoir’s transcription, you have the illusion of hearing everything — almost!

DH: Bonus question for someone who lives in Toulouse: what in your opinion are the essential ingredients in cassoulet?

MB: The beans! And for a true cassoulet, you have to use “les lingots.”

END_OF_DOCUMENT_TOKEN_TO_BE_REPLACED

Supported by engagingly, yet simple staging by Cara Consilvio, a well-prepared cast of singers told the archetypal story of Cinderella with charm and flair. Framing the production was  a sparse but colorful set and wonderful lighting by Dave Brooks. END_OF_DOCUMENT_TOKEN_TO_BE_REPLACED