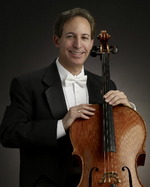 RW: Many members of the CCS are teachers as well as performers and share a desire to give their students exposure to other cellists and alternative styles of performing, for example, improvisation as taught by Eugene Friessen and others we have sponsored to do workshops in Cleveland. Also, while I joke that cellists are not as competitive as violinists, we do encourage competition which gives our students the incentive to keep refining their skills. That is the reason we sponsor an annual competition for all grade levels.

CC.com: What’s one thing you’d like to see the Society do that it hasn’t yet gotten around to doing?

RW: CCS has a long list of accomplishments in terms of recitals and master classes given by notable cellists, which Ida Mercer can immediately produce upon request! One brainstorm our committee recently came up with involves a mystery hunt/car rally with all cello-related waypoints. The only thing holding us back is finding the perfect Cleveland weather day, and safety planning so that our more competitive cellists aren’t tempted to break traffic laws in search of the “holy grail” of cellodom. My personal whim is to attempt a Guiness Book world record by scheduling the most cellists ever travelling with their instruments in the seat next to them on the same flight out of Cleveland Hopkins airport…but the expense would be considerable, not to mention the panic it might cause in the flight crew!

CC.com: Was the cello your original choice of instrument? If you weren’t a cellist, what might your second choice be?

RW: In response to your final question, cello is really my only instrument, although when I first joined the Cleveland Orchestra, I had just enough piano skill and so was enlisted to play the celeste part in Bartok’s “Miraculous Mandarin” — a real thrill!

The cimbalom was the feature of the show, an instrument capable of taking on many personas. Its performer, Chester Englander, has shaped his career around the instrument, and has inspired composers to write more repertoire for it, some of which was presented on the program. END_OF_DOCUMENT_TOKEN_TO_BE_REPLACED

You wouldn’t expect that acoustic from a glance at the nave, which is wide and long, but not especially lofty. But when I guest conducted a local amateur choir and professional orchestra in Beethoven’s Mass in C there a few years back, during the first rehearsal we released the final chord of the “Gloria” and listened in astonishment for the next several seconds. The sound continued to roll down the space like the big wave that surfers dream about. END_OF_DOCUMENT_TOKEN_TO_BE_REPLACED