Today, May 15, 2013 is here and so marks the official release of the highly anticipated recording Ensemble HD – Live at The Happy Dog. So much has happened since June 23, 2010 when Cleveland Orchestra principal flutist Joshua Smith and Happy Dog proprietor Sean Watterson decided to take the plunge by bringing live “classical” music to a venue more known for presenting local rock and polka bands. But what this album celebrates most is the shared vision and philosophy of creating something that would put a new face on classical music which Smith and Watterson brought to a reality.

“Yet, perhaps what ails classical music has less to do with the audience, the nature of the music or the people who play it, then it does with the places and the manner in which it is usually played.” Michener suggests, “What if one could experience Beethoven and Bartok in a setting other then a shrine-like auditorium…? What if the players arrived not in formal evening dress but as people who look and act just like the rest of us? What if you could enjoy Beethoven and Bartok in a casual public watering hole on an ordinary urban street while chatting with your companion, ordering food and drink, and even glancing occasionally at a TV monitor where an NBA or NFL game is in progress.”

That June night, the event then billed as Orchestral Maneuvers at the Dog attracted an overflow audience as well as the national press. Although most writers found it to be a novel idea, in looking back, clearly people didn’t quite know what to make of the event. On October 16, 2010 the New York Times wrote, “A small contingent of musicians from The Cleveland Orchestra was playing chamber music on the bar’s small stage, part of an effort to win new fans for the financially troubled orchestra. Patrons were encouraged to eat, drink and chat.”

But, that evening was no one-off, plop-down publicity stunt — not in the least, for Smith and his Cleveland Orchestra colleagues, oboist Frank Rosenwein, violinist Amy Lee, violist Joanna Patterson Zakany, and cellist Charles Bernard along with Watterson (pictured below), immediately began work focusing on making the next show better. 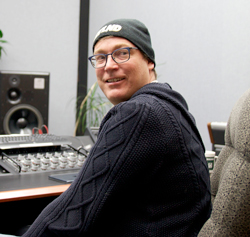 Like all great club musicians and entertainers, one needs to spend time figuring out how to successfully work the room. Smith recalls, “We began with Mozart and it was a mistake – it turned into wallpaper.” They quickly realized that a piano was needed (enter pianist Christina Dahl) and standing-room-only audiences would require them to rethink the programming. Fast forward two years. After a lot of thinking, experimenting and adopting the name Ensemble HD, on December 4 and 5, 2012, capacity audiences gathered for live recording sessions that would result in this monumental recording — which exceeds expectations on every level.

The album, available as a digital download or in double vinyl format with collectable trifold cover and liner notes, has the feeling of a live jazz recording (think To Bird with Love: Live at the Blue Note). The audience is there and you get the feel of the room, but it’s all about the music. The album’s 10 tracks contain Ensemble HD’s crowd favorites featuring the music of Beethoven, Webern, Debussy, Bolcom, Britten, Shostakovich, Pärt, Messiaen, Halvorsen, Ravel and Piazzolla.

Flutist Joshua Smith, violinist Amy Lee and violist Joanna Patterson Zakany bring a light-hearted spirit to Beethoven’s Serenade, Op. 25 (movements 5 and 6), which serves as the perfect overture. Like the ensemble’s live performances, the playlist is all about logical musical progressions, and Patterson Zakany joins with pianist Christina Dahl in a riveting performance of Piazzolla’s Le Grand Tango that segues beautifully out of the Beethoven. The most fascinating paring is Webern’s Satz für Streichtrio followed without pause by Bolcom’s Graceful Ghost Rag. Lee, Patterson Zakany and cellist Charles Bernard bring out the haunting quality of the Webern, and Dahl’s performance of the Bolcom is sublime. But together the two works take on an other-worldly feeling.

Oboist Frank Rosenwein joins with Lee, Patterson Zakany, and Bernard in an inspired performance of Britten’s Phantasy, Op. 2, which makes a perfect prelude for Ravel’s Tzigane, expertly played by Lee and Dahl. A crowd favorite, Debussy’s Prelude to the Afternoon of A Faun, arranged for flute and piano, truly captures the work’s intimate character, and once the crowd has been lulled into beautiful dreams, the ensemble pulls out movements 3 and 4 from the Trio, Op. 67, of Shostakovich. Lee, Bernard and Dahl’s performance is stunning in every way. The fourth movement of Messiaen’s classic Quartet for the End of Time, Halvorsen’s Passacaglia (after Handel) and Pärt’s Spiegel im Spiegel round out the musical selections with three memorable performances.

After listening to both the digital and vinyl versions, I do prefer the vinyl, hands down. But it’s nice to have both, one for relaxing in the living room with a glass of wine and the other for jogging. Whichever you prefer, you won’t be disappointed. And how could you be, with such fine musicians and the second-to-none production team of producer Erica Brenner and recording engineer Thomas Knab? With vinyl mastering by Clint Holly of Well Made Music along with the keen vision and ears of executive producers Joshua Smith and Sean Watterson, this home town team delivers a must-have recording — not just for today when it’s the cool thing of the hour, but forever!

Published on ClevelandClassical.com May 15, 2013

END_OF_DOCUMENT_TOKEN_TO_BE_REPLACED

The strings-only work by Berg has made relatively frequent appearances on the Orchestra’s programs. In 2021, the musicians recorded it for the In Focus series, and it appeared again on last year’s European tour. Friday’s rendition maintained the group’s characteristic light and effortless playing, each section blending as much as possible to echo the work’s original form as a string quartet. At fifteen minutes total, the piece is quite short, but the dense encoded musical meanings require some extra-attentive listening. Splitting up the three movements ensured that each one could be appreciated on its own. END_OF_DOCUMENT_TOKEN_TO_BE_REPLACED