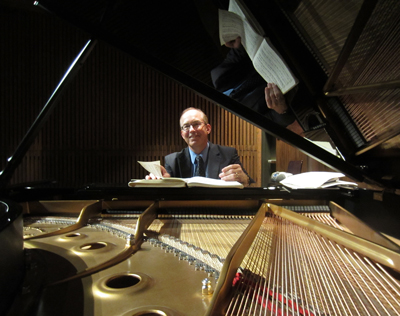 The second Festival Event of The Cleveland International Piano Competition held in the Recital Hall at The Cleveland Museum of Art, “Classical Improvisation and the Cadenza,” featured one of Cleveland’s finest improvisational pianists, Marshall Griffith. Appointed to the preparatory faculty of the Cleveland Institute of Music in 1975 and the conservatory faculty in 1982, Mr. Griffith spoke about and demonstrated the art of improvisation in an extremely engaging manner.

This morning’s enlightening conversation began with the simple question, “what is appropriate?” There are many considerations to ponder if one were to improvise a cadenza or add extra notes to the score during a concerto performance in modern-day presentations of concert music. Undoubtedly, a daunting and perhaps terrifying prospect for most, but in Mozart’s time, it was customary and second nature for the performer to not only improvise a cadenza at that special moment in a concerto, but to also add notes throughout the piece, as the solo part was rarely ever completely written down. Soloists of that period had all sorts of tricks and devices up their sleeves — scales, arpeggios, trills, themes, motives, etc. — and the technique and wisdom to know how and when to utilize them.

Griffith pointed out the striking similarity of the thought process between performers of that bygone era and today’s jazz musicians. In jazz, possessing improvisational skills is integral to the expression of the language, and despite having played a particular song countless times, variation and spontaneous inspiration play a key role in its success and enjoyment. So, much like the artistry and creativity of today’s musicians who speak the language of jazz, performers in Mozart and Beethoven’s day were likewise equipped with elements of their Classical language, delighting and dazzling  audiences with their technique, individuality and inventiveness. 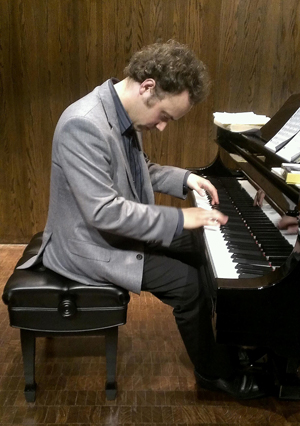 After Griffith played excerpts from Scarlatti and Mozart to demonstrate the many considerations and possibilities — and what would be stylistically inappropriate — of cadenza composition, attendees were treated to a special surprise. Alexander Schimpf, first prize winner in the 2011 Cleveland International Piano Competition, took to the stage to perform the cadenza he composed for Mozart’s Piano Concerto No. 13 in C, which he performed with CityMusic Cleveland (conducted by Cleveland Institute of Music President Joel Smirnoff) at the July 30 Opening Ceremony.

Griffith hovered over Schimpf’s shoulder, amusingly calling out the action play-by-play in sportscaster fashion: “…oh, there’s a good use of scales… trills — very nice… and great sequencing!…” As he was being praised for his cadenza-writing skills, Schimpf protested, “but it’s all Mozart,” to which Griffith countered, “aaah — but it’s you taking elements from Mozart’s creation and manipulating and juxtaposing them into your own individual and brilliant expression!”

END_OF_DOCUMENT_TOKEN_TO_BE_REPLACED

Supported by engagingly, yet simple staging by Cara Consilvio, a well-prepared cast of singers told the archetypal story of Cinderella with charm and flair. Framing the production was  a sparse but colorful set and wonderful lighting by Dave Brooks. END_OF_DOCUMENT_TOKEN_TO_BE_REPLACED