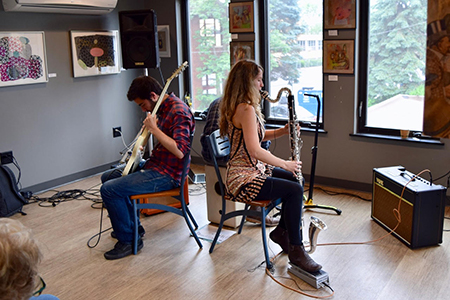 A highlight of Juxtatonal’s set was their surprise transition between the first two works. Hamilton suddenly started yelling random numbers from the audience at the end of In Praise, and as she approached the stage, Zelasko and Hayslett joined in with different permutations of the numbers to lead into Hagen’s work.

A Feign Opt (2017) was played over a recording of the trio improvising around a static, atmospheric drone. The live trio contributed short one-note attacks, rubbings, and a powerful crescendo that suddenly ground to a halt. At one point, the result was like whale calls deep in the ocean. They ended with a group improvisation, sitting in a small circle and facing outward. The resulting wobbles and long swooping notes — as they relied on their ears instead of their eyes to communicate — created music that allowed time to stop, forcing an intimate contemplation of each passing noise.