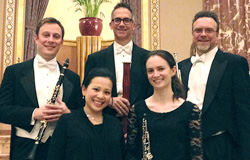 Planning a full-length concert of wind music can be tricky. The ear can grow weary no matter how fine the playing (and wind players can get tired for their own reasons). Sunday’s group made some savvy decisions, mingling two trios with a solo piece and ending with probably the best work in the wind chamber music repertoire.

Robert Woolfrey led off with Oskar Morawetz’s Clarinet Sonata from 1981. Richard King, who gave some running verbal background, noted that Morawetz, a Czech “of the Jewish persuasion,” fled the Nazis and passed through various countries before ending up in Canada. Woolfrey, a Canadian himself, gave the wispy, atmospheric sonata, which explores the whole range of the instrument, a fluent and committed reading.

Heinrich von Herzogenberg, a contemporary of Brahms and author of eight symphonies, is probably terra incognita to anyone who hasn’t played his Trio in D, op. 61 for oboe, horn and piano. The cheerful, extroverted piece is something like a bargain basement pastoral symphony, simulating both a ramble in the country and a hunt during its four movements. It’s a fun piece and perfect for a Sunday afternoon. Lynch, King and Yudha seemed to be having a good time playing it, vapid as most of its themes turn out to be.

Poulenc’s delightful Trio for oboe, bassoon and piano may include a prosaic tune or two itself, but in this case it’s not the result of naiveté but a sharp sense of wit and parody. The two wind instruments engage in a chatty conversation throughout over some occasionally bluesy piano chords, and at one point Poulenc nearly quotes the flute solo from Gluck’s Dance of the Blessed Spirits. Lynch, Stees and Yudha gave it all the panache it needed.

Finally came Mozart’s divine Quintet in E-flat, a piece Beethoven so admired that he could be accused of plagiarizing it for his own quintet. As one would expect from members of The Cleveland Orchestra, wind tone was lovely and nuanced, ensemble was tight but flexible and the whole piece was expertly paced. (You keep hoping for yet another episode of the Rondo theme at the end.) Cicilia Yudha was a sensitive and fluent presence at the keyboard; her wind partners produced so much sheer tone that she might even have dared to play out a bit more.

END_OF_DOCUMENT_TOKEN_TO_BE_REPLACED

The strings-only work by Berg has made relatively frequent appearances on the Orchestra’s programs. In 2021, the musicians recorded it for the In Focus series, and it appeared again on last year’s European tour. Friday’s rendition maintained the group’s characteristic light and effortless playing, each section blending as much as possible to echo the work’s original form as a string quartet. At fifteen minutes total, the piece is quite short, but the dense encoded musical meanings require some extra-attentive listening. Splitting up the three movements ensured that each one could be appreciated on its own. END_OF_DOCUMENT_TOKEN_TO_BE_REPLACED