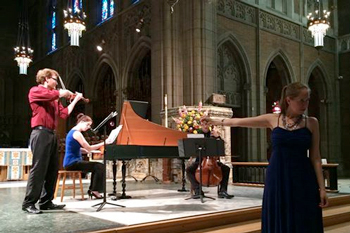 The word “Baroque” trips so easily off our modern tongues that we forget a few things about its origin. First of all, nobody in the seventeenth and eighteenth centuries thought they were writing “Baroque” music. Later critics used the term (which plausibly derives from the Portuguese word for “a pearl of irregular shape”) in a pejorative sense to describe art that was too ornate, busy or emotional.

What we also forget is that the music and art of that period was meant to be inordinately decorative and hyper-expressive, pushing as it did against the cool, rational conventions of the Renaissance. To be reminded of those values, all you need to do is to check out a performance by the enterprising — and surprising — musicians of Burning River Baroque.

Three cantatas dealt with stock dramatic situations of the era, whose poets enjoyed reaching into classical antiquity to craft scenes involving the wiles of Cupid and the woes of lovelorn shepherds. In Porpora’s Destatevi, destatevi o pastori, Malina Rauschenfels entered strikingly from the back of the nave and sang the complaints of the shepherd Silvio from memory with expressive gestures and clarion tones. She ventured into the audience for similar effect in Bononcini’s Alle sue pene intorno and enhanced the final aria of Scarlatti’s Iberian-flavored No, non fuggire, o Nice with castanets. If her facial expressions and body language sometimes went over the top, that was completely in keeping with the style of the music.

Violinist Peter Lekx played masterful and energetic obbligati in the cantatas, joined by Zucker and Maust, who expertly laid down continuo lines. Lekx had his own moments in the spotlight in Scarlatti’s g minor violin sonata — originally a keyboard piece — and in Veracini’s decidedly strange but captivating Sonata academisch in g, op. 2, no. 5. Rauschenfels ably doubled on cello for the violin sonatas and took another dramatic solo stint in Porpora’s F Major cello sonata, a piece with a charmingly buffoonish Allegro movement.

Burning River Baroque exhumed an hour’s worth of unusual “Baroque” repertoire on Sunday afternoon and brought it to vibrant life. Too bad there wasn’t more of an audience on Sunday. The distractions of fine weather seem to have kept people away.

END_OF_DOCUMENT_TOKEN_TO_BE_REPLACED

Supported by engagingly, yet simple staging by Cara Consilvio, a well-prepared cast of singers told the archetypal story of Cinderella with charm and flair. Framing the production was  a sparse but colorful set and wonderful lighting by Dave Brooks. END_OF_DOCUMENT_TOKEN_TO_BE_REPLACED