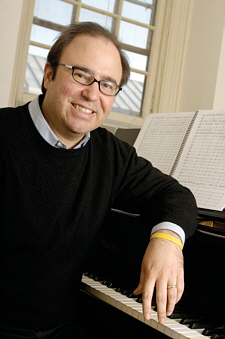 Last week at Baldwin Wallace University, Christopher Theofanidis joined a distinguished list of composers — including such names as William Bolcom, John Corigliano, Witold Lutoslawski and Krzysztof Penderecki — whose music has been gathered into a week-long Focus Festival to be rehearsed, discussed and performed by BW students and faculty. Begun in 1984 by Loris Chobanian and Elinore Barber, the festival was revived this year by BW composer-in-residence Clint Needham, who chose Theofanidis as the person to celebrate.

Unlike some of the thornier composers in Focus Festival history, Christopher Theofanidis makes friends quite easily through his music — a remarkable trait because there’s nothing facile or consciously ingratiating about his musical style. Instead, there’s a beguiling universality to his subject matter and a pervasive quality of transcendence that draws the performer and listener into a mystical world that is also warm, personal and lives in the here and now. In a program note, he refers to his “love-drunk nature,” which gets at the heart of his musical inspiration.

Saturday evening’s performance began with three of the four Messages to Myself (2007), choral settings of poems which Theofanidis said “have become a resonating chamber for my way of thinking.” Lines from Walt Whitman, a medieval Persian mystic and W.B. Yeats were set to first homophonic, then more elaborately textured and finally ecstatic music. Dirk Garner conducted the Motet Choir.

Dwight Oltman then led the Symphonic Wind Ensemble in Etenraku (1996), a brief evocation of the traditional Japanese court orchestra, followed by Theofanidis’s Marimba Concerto (2013), featuring faculty artist Josh Ryan. Etenraku, all of two minutes in length, uses special techniques to imitate the sound of the sho (clarinets), hichiriki (oboes playing down on their reeds) and the shakuhachi (flutes). The rather laid-back marimba concerto, “a concerto tucked inside a prologue and aria” is lyrical rather than virtuosic, gentle rather than percussive. Ryan dispatched his solo role with elan.

There would be more to say about a live performance. While the BW stream — a recent innovation available for selected concerts — is a good way to stay in touch with remote events, it’s nothing like being in the hall. Video and audio are just enough out of sync to be distracting, and the audio — which is sent out at really high levels — is compressed almost to the point of sounding monaural. It’s still early days for this technology, but at this point you can’t tell much about the quality of a performance by what comes through your headset.

Sunday’s audience was small on the ground floor, but an enthusiastic body of students occupied the balcony to hear five of Theofanidis’s works for chamber ensembles. Violinist Julian Ross and cellist Regina Mushabac led off with Summer Verses (2009), a five-movement catalog of the vicissitudes of duet playing with a hilarious sendup to cellist Robert DeMaine involving player pantomime.

Violinist Samuel Rotberg took the stage alone for Flow My Tears, a 1997 monument to composer Jacob Druckman that resembled a Celtic lament in its elegiac intensity.

Pianist Robert Mayerovitch found all the drama, changing moods and character in the solo piano work All dreams begin with the horizon (2007), intended as a birthday present to be performed at a salon-style party.

The afternoon concluded with the string quartet Visions and Miracles (1997), at least subliminally inspired by the medieval Cantigas de Santa Maria, but also drawing on influences from Nietzsche, Timothy Leary and a Troubadour song. Attractive rhythms and cascades of notes like pealing bells were prominent features of this piece, written for the Cassatt, Muir and Cuartetto Latinoamericano quartets.

Though a few performances this afternoon sounded unsettled, the program gave insights into some of the many streams of inspiration that combine to create the fascinating music of Christopher Theofanidis. Whoops and cheers from the balcony at the end when the composer took several bows suggested that BW students had a fine experience focusing in on his music this week.

The cimbalom was the feature of the show, an instrument capable of taking on many personas. Its performer, Chester Englander, has shaped his career around the instrument, and has inspired composers to write more repertoire for it, some of which was presented on the program. END_OF_DOCUMENT_TOKEN_TO_BE_REPLACED

You wouldn’t expect that acoustic from a glance at the nave, which is wide and long, but not especially lofty. But when I guest conducted a local amateur choir and professional orchestra in Beethoven’s Mass in C there a few years back, during the first rehearsal we released the final chord of the “Gloria” and listened in astonishment for the next several seconds. The sound continued to roll down the space like the big wave that surfers dream about. END_OF_DOCUMENT_TOKEN_TO_BE_REPLACED