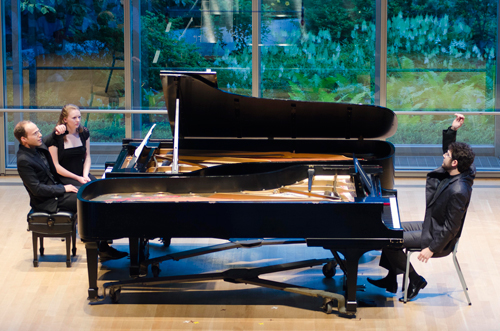 The third season of ChamberFest Cleveland opened Thursday in CIM’s Mixon Hall, on a beautiful late spring evening. With a packed house and a splendid program, the concert was a third birthday party for this young and thriving member of northeast Ohio’s vibrant musical family.

One of the joys of a festival is the variety of performers one hears on any one night, in this case all excellent. This first night of ChamberFest featured ten musicians – including the festival’s founders and driving forces, Cleveland Orchestra principal clarinet Franklin Cohen and his daughter Diana, concertmaster of the Calgary Philharmonic. By the time the festival ends next week, ten concerts will have presented 24 musicians from around the world.

After a warm welcome from the Cohens, the music got underway with Rachmaninoff’s exuberant Suite for Two Pianos, Opus 17, a piece of grand pianistic music in the late nineteenth century tradition (the piece was premiered in 1901). The four movements are virtuosic and ornate, a rich brocade without much pretense of deep thought. Cleveland native Orion Weiss and Israeli pianist Roman Rabinovich thoroughly mastered Rachmaninoff’s fiercely brilliant passagework.

The theme for this season of ChamberFest is the number three – it’s the festival’s third birthday celebration, after all. While the Rachmaninoff, with two performers and four movements, didn’t quite fit the arithmetical guidelines, the next two pieces each featured the magic number of performers.

The first of these trios was Kevin Puts’s 2001 piece for clarinet, violin, and marimba, And Legions Will Rise (the enigmatic title was not fully explained in the notes). Joining Franklin Cohen were violinist David Bowlin, on the faculty of the Oberlin Conservatory, and Scott Christian, principal timpani in the West Virginia Symphony, here playing marimba. Full of passion and conviction, this tonal and highly rhythmical piece featured some stunning marimba work, Christian’s four mallets flying through intricate arpeggiated patterns. The violin and clarinet provided lyrical, sustained counterpoint to the marimba’s visceral, percussive energy. It’s a highly accessible piece, thanks to the composer’s acute sense of how to draw attention to transitions between sections in a carefully structured whole. 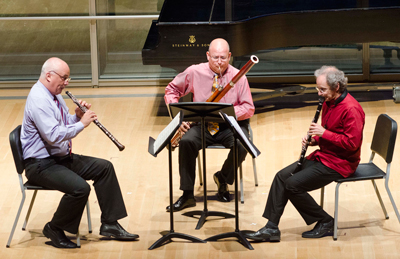 After intermission, another trio took the stage, with clarinetist Cohen now joining Mexico City bassoonist Fernando Traba and well-known oboist Alex Klein (formerly principal oboe of the Chicago Symphony), for Four Madrigals (1937) by Czech composer Bohuslav Martinů. Jazzy and modernist, often evocative of Stravinsky, these lively pieces are showpieces for virtuoso wind players, and these three masters of their trade seemed to enjoy the technical and rhythmic challenges that Martinů threw at them. The four movements are nicely varied, though the final moto perpetuo repeated its slinky canons just a few too many times for my taste. 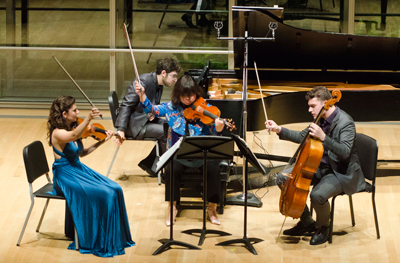 The most familiar piece of the evening was saved for the finale: Gabriel Fauré’s C minor Piano Quartet. Its sustained lyricism was a lovely pleasure at the end of a concert packed with somewhat more nervous music. From the very beginning, the string players (Diana Cohen, violin, with Yura Lee, viola, and Gabriel Cabezas, cello) showed an affinity with the rich and tender romanticism of this piece. Especially remarkable was the chemistry between the two lower string parts, alternatively blending in and speaking out as they traded Fauré’s heartfelt tunes. Roman Rabinovich brought to the keyboard part a gentle expressiveness, though a little more volume from the piano would have better matched the big string sound. The players achieved the best balance when the strings were muted in the Trio section of the Scherzo.

While the program was long for a birthday party on a June evening, its variety and the evident enthusiasm of all its performers kept the energy of everyone involved – musicians and audience—at a high level. It set a daunting pace for the two weeks to follow!