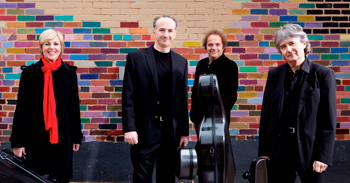 A colleague at Monday evening’s first installment of the Tackács Quartet’s complete Bartók Quartet cycle looked up at the packed balconies of Plymouth Church and mused about why such a crowd would turn up for an all-Bartók concert but probably not for one dedicated to the music of Webern or Schoenberg.

Good question. Part of the answer undoubtably had to do with the performers. In choosing to invite the Takács Quartet to play all six quartets over two evenings (March 17 & 18), the Cleveland Chamber Music Society delivered a tightly-wrapped package for its patrons: a half-dozen of the finest string quartets written in the twentieth century played by an originally all-Hungarian ensemble who have these pieces in their bloodlines and have made a specialty of playing them complete in a short stretch of time. (Some years ago, the Takács did that in a single day at Reinberger Chamber Music Hall, a marathon some are still talking about.)

The other part of the answer is the sheer vitality of Bartók’s writing, much of which is inspired by folk traditions — but not in the way other composers incorporated folk music into their works. Rather than using recognizable traditional melodies (though occasionally a complete phrase or two will shine through), Bartók collected folk music, then broke its materials down into pithy motives he could play with using all the tools of the composer’s trade in the same way scientists take DNA apart into its constituent parts and recombine them in imaginative ways.

Let’s not go too far with that analogy lest the biochemists start writing letters, but the idea is that Bartók made himself little building blocks of arresting note combinations, then used them to create rigorous musical constructions whose thematic origins are always clear and recognizable. Once you hear a certain memorable three-note cell, you’ll know it again whether it’s played backwards or upside down.

And then there are the rhythms — compelling rhythms that come more directly from folk traditions and which infuse Bartók’s music with kinetic vigor. You can deeply appreciate Webern and Schoenberg on an intellectual level, but catchy, infectious rhythms that make you want to cue the dancers are difficult to find in their music.

And finally, there’s an astonishing diversity among the six Bartók quartets that would hold your attention for over two and a half hours even if they were played end to end. Spread over two evenings, there is no possibility of boredom or satiety, especially when the longest quartet lasts barely over 30 minutes.

The Takács Quartet (violinists Edward Dusinberre and Károly Schranz, violist Geraldine Walther and cellist András Fejér) divided the quartets into odds and evens, playing nos. 1, 3 and 5 on Monday evening and nos. 2, 4 and 6 on Tuesday. That plan began and ended the cycle with the first and last pieces to be composed, and shuffled the middle ones. On Monday, the audience heard works written in 1908, 1927 and 1934, on Tuesday works dating from 1917, 1928 and 1939. If this ordering might have limited one’s appreciation of how Bartók “progressed” as a composer, it made for a completely engaging concert experience.

Throughout the cycle, the Takács played with compelling precision wedded to superb musicality. Whatever the texture or context, the players made Bartók’s often alien-sounding effects part of the entire narrative of a movement rather than a disjointed catalogue of alluring gestures, and through their uncanny sense of pacing, made those movements into a greater whole.

Nowhere was this so evident as in No. 4, which came in the middle of Tuesday evening’s program and could be used as a training manual for extraordinary string playing techniques. The ghostly, muted Scherzo, the splendid cello solo in the third movement — seemingly improvisatory but micro-managed in the score — answered by violinistic angst, the totally pizzicato fourth movement and the stunningly dancy finale added up to more than the piece’s wildly divergent components.

Have we mentioned the Takács’s unerring intonation? That was particularly impressive considering the quartet’s laudable commitment to tuning offstage so that only Bartók’s music would be heard in the hall. The sole exception came after the string-stretching fourth movement of No. 4, and you could understand why.

On both evenings, the large audience was swelled by string players — students, teachers and members of area ensembles, who gave the Takács a big, warm ovation. Musicologist Peter Laki, who explained it all for the audience in two pre-concert talks with members of the quartet, drew record crowds both evenings.

With this work, premiered in 1907, Sibelius offered a bold departure from the explosive emotionalism so prevalent in late-Romantic era music. This symphony was a renewed embrace of Classicism’s purity of form and melody, and one that, oddly enough, left many initial audiences of the day somewhat bewildered. END_OF_DOCUMENT_TOKEN_TO_BE_REPLACED

After eating a Po’boy from The Dawg Bowl Cajun food truck, I caught the first half of Brian Culbertson’s show in The Connor Palace Theatre. END_OF_DOCUMENT_TOKEN_TO_BE_REPLACED