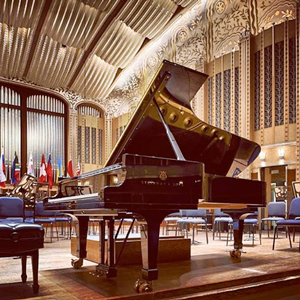 On Friday, François Dumont played with consistent strength and utter confidence, bringing a muscular tone to tuttis that clearly penetrated and sometimes even overbalanced the orchestra (though it was fun to finally hear some passages that are normally only a visual experience). Though Sanderling and Dumont were slightly out of phase for a few moments near the beginning, orchestra and pianist soon got on the same train and produced a thrilling account of Tchaikovsky 1.

On Saturday, Jiayan Sun gave us a nuanced view of the piece, varying his touch to produce colorful strength of tone one moment and delicate filigree the next and exploring a wide range of dynamics. Sun’s was a highly kinetic performance, with considerable body movement and armsmanship. A few fast passages nearly got away from him, but he reined his ponies in just in time.

Arseny Tarasevich-Nikolaev followed Tchaikovsky on Saturday evening with Rachmaninoff’s second concerto — a piece the composer himself played in Severance Hall in 1923 and 1942. Though tonight’s contestant had only played it once before with an orchestra, his performance was skillfully controlled and masterful, his tone rich and dark. Tarasevich-Nikolaev was intent on keeping things moving in the opening movement, but was beautifully relaxed and self-possessed in the last (Allegro scherzando), not allowing himself to wallow in its big tune. The performance lacked only the patina of age and experience.

Second to play on Saturday was Stanislav Khristenko, who brought an individual take on Brahms’s first concerto to the Severance Hall stage. Notably slow tempos in the first two movements gave him lots of room to emote, sometimes at the expense of musical structure and flow, but his playing was rich, sonorous and expressive, and he brought the concerto home with bursts of magnificent playing in the final Rondo.

Certainly all four players could have used more exposure to the orchestra than they got in 65 minutes each of rehearsal time, but that’s not far from the industry standard for concerto put-togethers. All could have benefitted from a more responsive presence on the podium, and vague signals from the conductor made even The Cleveland Orchestra sound uncharacteristically ragged from time to time.

Though the jury would consider all the performances that went before as well as the final concertos, it would still be a thorny task to rank these four pianists — who came to this moment through a winnowing process that was itself difficult because of the remarkably high quality of the twenty-eight contestants in this year’s draw.

END_OF_DOCUMENT_TOKEN_TO_BE_REPLACED

Then, you heard all the qualities that make for a stunning soloist. Winner of the 2013 Cleveland International Piano Competition, Khristenko was back in town this month for a recital in Piano Cleveland’s summer series, Piano Days @CLE. And he couldn’t help but revel in the spotlight a little, even as he settled into a more collaborative role at the keyboard for his program, “Stanislav and Friends.” END_OF_DOCUMENT_TOKEN_TO_BE_REPLACED