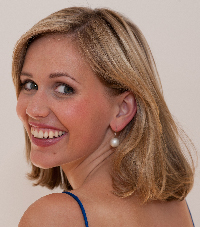 Annika Treutler (23, Germany) assembled a program of Haydn, Hindemith, Scriabin, Chopin and Liszt for the afternoon’s opening set. Her elegant phrasing, graceful but forceful technique and fine sense of musical line and architecture touched everything she played. Only subtle shadings of color and dynamics differentiated each of Haydn’s f-minor variations from the other. Hindemith’s Suite “1922”, a piece parodying popular dances of the era — which the composer later advised his publisher not to bother to reprint — was far more eventful as Treutler navigated her way through its Marsch, its gloomy, atonal Shimmy, its thick-textured but later sparkling Nachtstück, its waltzy and rhetorical Boston and its uptime Rag, which sported a huge ending. Scriabin’s op. 13 Preludes were by turns rumbling, wistful, ornate and powerful. Treutler played Liszt’s reworkings of Schumann’s songs, Widmung and Frühlingsnacht with grace and agility, and Liszt’s own Hungarian Rhapsody No. 8 with characteristic spirit. The audience enthusiastically applauded after each item in the set.

Oskar Jezior (28, Poland) proposed an interesting program, beginning with Alban Berg’s op. 1 sonata and concluding with Beethoven’s Hammerklavier sonata (op. 106), with the entremet of Liszt’s evanescent Nuages gris. It’s obvious that the Berg is close to his soul: he played the sonata reverently and expressively, caressing its soft sections and bringing out the work’s inherent lyricism and melodic qualities, even in its louder passages. His slow, lingering reading of Grey Clouds apparently had cosmic resonance, summoning up bursts of thunder and sheets of rain. Jezior’s approach to the standard repertoire often seems to be iconoclastic, and so it was with his concept of the Hammerklavier sonata. Playing petulantly and too fast for coherence, he smeared runs with pedal and blurred important motives. The Adagio was dead slow, the Allegro risoluto rather frantic. It’s something of an intractable piece on the best of occasions, but this performance was one of the more unusual.

First to play in the evening, Stanislav Krishtenko (29, Russia) began with a colorful, percussive reading of the Bartók sonata, masterfully juxtaposing loud and soft statements of the same material and varying touch and attack. He played the last movement with signal brilliance, contrasting its nervous left-hand figures with right-hand themes and creating arresting, colorful accents. Expert layering of material (though the left-hand sometimes overbalanced) and rubato in the right places made the first movement of Schumann’s Fantasie in C moodily expressive and formally coherent. His quixotic approach to individual phrases suited the second movement well. Following tonight’s cell phone intrusion (an every-session phenomenon), Krishtenko turned to the last movement, playing with romantic abandon and shaping a noble, exultant coda. His showpiece was Liszt’s Rhapsodie espagnole, based on some well-known Iberian tunes. Brilliantly rhythmic, the medley gave Krishtenko the opportunity to contrast Lisztian fury with charmingly lyrical dance tunes.

François Dumont (28, France) began the last performance of the semi-final round with a stormy and capricious account of the first movement of Beethoven’s op. 111 sonata that had both shape and suspense. His handling of the immensely long Arietta — a conundrum to many pianists — was masterful, his dotted rhythms first graceful then imbued with a gentle swing. He used the whole dynamic range to fine effect, and though restrained and orderly, his interpretation still allowed Beethoven’s restlessness and eccentricity to shine through. It was revelatory to hear a French pianist of Dumont’s caliber play Ravel’s Gaspard de la nuit. Though clean-textured, the three movements evoked strangeness and mystery. Dumont drew out their fantastical nuances and moments of malevolence while respecting their musical architecture — and never made them sound as difficult as they are. He ended with Liszt’s Vallée d’Obermann, beginning with lyrical restraint, then surging ahead with blazes of handsome tone. Dumont is a complete pianist with a mature feel for his repertoire and a sure sense of interpretation.

The first such video, capturing the October 20 performance of Resilience at First Baptist Church in Shaker Heights, delivered handsomely on that promise. Erica Brenner’s sensitive videography and audio mixing preserved brilliant performances of music that illuminated two troubled periods in history: the plague of London in 1665, and the outbreaks of cholera and dysentery that dampened but failed to defeat the human spirit at the end of the American Civil War two centuries later. END_OF_DOCUMENT_TOKEN_TO_BE_REPLACED

The Diamond Brass Quintet opened Rocky River Chamber Music Society’s new season on Monday, October 12 with nobody in the pews at West Shore Unitarian Universalist Church. Like most performances these days, the concert was only attendable online. The players were widely-spaced on the stage, plexiglass shields were in place to cut down on aerosol transmissions, and the quintet took two intervals to go outdoors and let the air in the sanctuary refresh itself. (Rehearsals had been held outside as well.) END_OF_DOCUMENT_TOKEN_TO_BE_REPLACED

“Bewitched,” the first subscription concert of this season by Les Délices, can be summed up in one word: sensational. In her introductory remarks, director Debra Nagy talked about the “Embracing Change” theme of the season and completely rethinking the concert experience for streaming. The detailed planning was in evidence throughout the program. “Bewitched” was not just a concert; it was a carefully planned musical film, with elements of drama and music appreciation, all in support of the inspired program choices featuring Medea and Circe, two famous witches (or sorceresses, if you prefer) of classical antiquity. END_OF_DOCUMENT_TOKEN_TO_BE_REPLACED

END_OF_DOCUMENT_TOKEN_TO_BE_REPLACED

Though it had amassed a vast trove of audio over the decades, The Cleveland Orchestra has come late to the game in the video department. Even so, the organization wasn’t about to rush to produce the equivalent of home movies to keep its patrons engaged while live events were on hold. END_OF_DOCUMENT_TOKEN_TO_BE_REPLACED

END_OF_DOCUMENT_TOKEN_TO_BE_REPLACED

Although it wasn’t the original plan to go online last weekend for the final round of the James Stroud Classical Guitar Competition, moving to a digital format suited the event well. Young performers Aytahn Benavi, Patricia Hernandez, Ian Tubbs, and Eric Wang played in the intimate setting of their own homes, giving everyone who tuned in a front row seat. END_OF_DOCUMENT_TOKEN_TO_BE_REPLACED