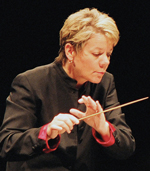 Two of the three works that Baltimore Symphony music director Marin Alsop brought along for her guest appearance with The Cleveland Orchestra last week were strongly related through birth.

Both Samuel Barber’s Second Essay for Orchestra and Aaron Copland’s Symphony No. 3 were written at the behest of Serge Koussevitsky, the Barber a suggestion, the Copland an actual commission in memory of the conductor’s wife. Both date from the World War II years when American composers were writing confidently in their own independent voices.

As American composers, Barber and Copland were natural choices for Thanksgiving weekend concerts. The third work, Schumann’s piano concerto featuring French pianist David Fray, seemed at first to make an odd middle panel of this triptych, but ultimately served as a refreshing entremet between two heavily-scored works that could not escape echoing the thunder and heroism of a nation at war.

That thunder crept in soon after the nearly-pastoral beginning of Barber’s Second Essay, following beautiful wind solos. Nervous pulsations from the timpani became more persistent and prominent as the piece progressed to include expansive statements from the horns, a craggy fugue and rousing string tuttis with penetrating violin lines.

At the other end of the evening, Copland’s Symphony No. 3 laid out all the building blocks needed to assemble the famous Fanfare for the Common Man during its first three movements, finally bringing that piece out in all its brassy glory just after the beginning of the finale. Along the way, the piece references a stream of Copland’s recurring musical gestures; at many junctures it could suddenly veer off into one of the composer’s ballet suites.

The huge orchestra, including a battery of percussion, two harps, piano and celesta (what, no organ?), produced a predictably robust sound, especially at peak moments in the fourth movement when volume levels approached cover-your-ears levels. There were lovely, more nuanced details as well: fine wind solos especially from piccoloist Mary Kay Fink, a glistening passage involving harps, piano and celesta and tinkly percussion, the eerie high violin introduction and sprightly middle section of the slow movement.

But the symphony belonged to the brass. If they were a bit overly exuberant in parts of the first movement, they were completely thrilling in the Fanfare and the big climaxes, of which there were many. But perhaps too many of them were too big. A more terraced approach to dynamics would have been kinder to the ear, and Alsop might have asked the orchestra for a true pianissimo at several points during the symphony. 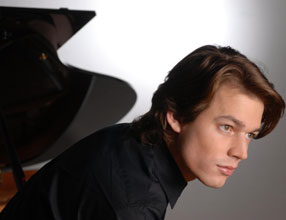 Schumann’s only concerto for the piano, written for his wife, Clara, set out to fold the solo instrument and the orchestra into a new, interactive relationship, an innovation that can create big-scale chamber music in the right hands. David Fray, Marin Alsop and The Cleveland Orchestra handily achieved that sense of give-and-take, though the conductor’s tendency to fuss over details sometimes came at the expense of lightness and forward motion.

Fray’s solo playing was beautifully lucid when he simply let his own clear technique and fluency shine through, less so when he applied extra emotion to Schumann’s own hyper-expressive rhetoric. The cellos made wonderful poetry in their second-movement section solo. The coordination between soloist and orchestra at the end of the finale was astonishing.

Two Decembers ago, Marin Alsop also programmed two American works for her Severance Hall guest appearances: Barber’s first symphony (1943) and Bernstein’s Serenade (1954). Between then and now, American music has been scarce on Severance Hall subscription programs. It would be refreshing to hear domestic repertoire more often, and not just on Thanksgiving weekend and Independence Day.

END_OF_DOCUMENT_TOKEN_TO_BE_REPLACED

What was that strange din coming over the live feed from Ludwig Recital Hall on Friday evening, July 23, as the Miami String Quartet filed onstage to play the third faculty recital of the Kent Blossom Music Festival? Accustomed as we were during the pandemic ban on live audiences to hearing the sound of no hands clapping, it was both startling and thrilling to witness a large crowd putting their hands together to welcome one of the Festival’s perennial favorites back for an in-person performance. END_OF_DOCUMENT_TOKEN_TO_BE_REPLACED

Practical reasons aside, there aren’t many ensembles who can put together an all-Mozart evening as elegantly as The Cleveland Orchestra. END_OF_DOCUMENT_TOKEN_TO_BE_REPLACED