Oberlin musicians who perform under the banner of The Bach Project drew a sizeable audience to the Church of the Covenant in Back Bay on Tuesday afternoon, June 11 for a concert comprising all of Johann Sebastian Bach’s “authentic” flute sonatas.

Bach’s rather gallant-sounding Trio in A (trio in the sense that the harpsichord plays two of the three musical lines) launched the program. Ornate flurries of notes from the harpsichord complemented Stewart’s elegant flute lines in the first movement — and the movement set the tone for what proved to be a noisy acoustical ambiance. A Boston street crew was intermittently thumping, rumbling and whirring outside. Later a cell phone went off, and a whoopy siren intervened, but all the musicians soldiered on, seemingly unperturbed and admirably undistracted.

The continuo sonata in E, BWV 1035 gave David Ellis some surprising cameo solos. Guitry took over for the continuo sonata in e, BWV 1034, providing a change in flute color (and Street had his own solo moment at the beginning of the Andante). Stewart returned for an expressive reading of the great b-minor sonata, BWV 1030 and the two flutists came together to end the program with the completely delightful G-Major trio sonata, BWV 1039.

The Covenant is a big space — its Victorian Gothic gloom pierced by an exuberant décor from the Tiffany Studios — and not the best venue for an intimate combination like baroque flute and harpsichord. Some tempos were a bit brisk for the acoustic. Though a lot of detail was necessarily lost, the Oberlin group were in obvious command of some difficult and complex music, and made a fine impression in spite of all the distractions.

Violinist Cynthia Miller Freivogel, who has played with Apollo’s Fire, gave an intriguing recital on Wednesday morning at the Goethe Institute on Beacon Street. Festivals are where you can program repertory that probably wouldn’t fly on an ordinary concert series, and here the violinist proposed nine of Telemann’s Fantasias for Violin without Bass. Noting that she had played all twelve in order before, and that would probably work for some situations, Freivogel chose to shorten the list and rearrange the pieces in a lineup that made sense to her. “For a one-hour concert, nine is enough!”

Freivogel is an engaging performer and a fine musician. Those attributes and the astonishing variety of forms the thirty-three movements of the nine fantasias explored made the hour fly by in a whirl of sheer compositional inventiveness. The intimate space — two rooms of a brownstone combined and decorated with intricate plasterwork — left Freivogel nowhere to hide and no need to. Her off-the-cuff remarks only added to the easy charm of the performance. 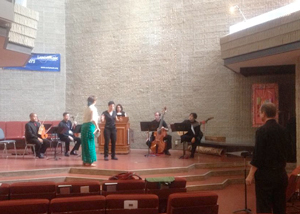 Adam Knight Gilbert, who earned his doctorate at Case (where he met his wife, Rotem), and most recently performed there in 2009 with his Renaissance wind band, Ciaramella, brought the USC Thornton Baroque Sinfonia to Boston to perform at First Church on Marlborough Street on Wednesday afternoon. The program was based around music written for the 1589 wedding of the Grand Duke of Tuscany to Christina of Lorraine by Cristofano Malvezzi, Luca Marenzio, Giulio Caccini, Giovanni de’ Bardi, Giorgio Mainerio, Jacopo Peri and Emilio de’ Cavalieri and performed here by eight vocalists and an instrumental ensemble of strings, guitar, dulcian, bagpipe, recorders, theorbo and organ.

Grouped into six Intermedii, or suites of solos, vocal ensembles and instrumental pieces, the scenes are heavily based on mythology and classical antiquity. Voices were expertly balanced — the three sopranos (Ladies of Ferrara?) were particularly fine — and instruments added a rich, dark sonority. Choreographed scenes came off looking a little goofy, especially in the underworld Intermedio and in modern dress, but the performances were assured and held one’s interest. Though it is one of the oldest religious organizations in Boston, First Church’s present sanctuary — cozied up against the outer wall of its previous building — is in the brutal style with grooved concrete walls lined with copper foil and protruding steel beams. An odd visual background to music from 1589, perhaps, but the acoustics are quite agreeable. 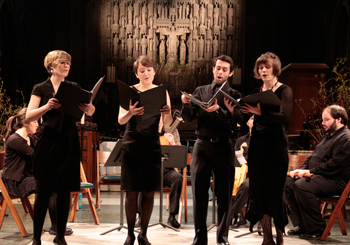 The Case Collegium Musicum under the direction of Debra Nagy (who also heads up Cleveland’s Les Délices) gave their program Hélas, Amour at First Church on Thursday morning. We heard and reviewed an earlier version of the concert at Trinity Cathedral in March (photo left), but the playlist has been tweaked and the already laudable performances polished to a fine gloss in the intervening months.

Flowing out of the courtly love tradition of the late middle ages, the repertory (all drawn from a single manuscript) explores the delights and devastation of love in poetry set by Guillaume Dufay and his contemporaries. Chansons and basse dances — some elaborated by Nagy and Sian Ricketts — alternated between solo and ensembles of voices, some accompanied, some not, and purely instrumental pieces. 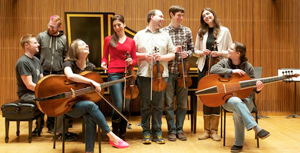 Oberlin Baroque, an all-student group from the Oberlin Conservatory, played a delightful program of off-the-beaten-track repertory at First Church on Thursday afternoon. An unusual concerto for four violins alone by Telemann was balanced at the other end of the tonal spectrum by a caprice for three viols and continuo by Marin Marais. The equally-matched violinists were Nathan Giglierano, Rachel Iba, Wyatt Underhill and Alana Youssefian, the sonorous gambists, Alexa Cicirette, Kate Shuldiner and Eric Tinkerhess. (Underhill soloed in Alban Berg’s violin concerto with the Oberlin Orchestra in May but like more and more players of his generation, seems equally at home playing period instruments.)

Two contrasting trio sonatas by Corelli and two dueling harpsichord works featuring Wesley Hall and Justin Murphy-Mancini filled out the torso of the program. The second Corelli sonata, more mannered than its predecessor, ended with a brisk gigue with echo effects. The Couperin harpsichord duets got off to an unlucky start with a mechanical glitch, but ended in a festive jangle of notes with an exciting accelerando.

Cellist Juliana Soltis, flutist Joseph Monticello and recordist Zachary Good filled out the ranks for the final work, Couperin’s La françoise from Les nations, a spirited dance suite which played groups of instruments off against each other and abounded in expertly-wrought ornaments and period rhythmic treatment.

The USC, Case and Oberlin groups were presented as part of Early Music America’s Young Performers Festival, created to encourage the next generation of players. A laudable program, indeed.

The cimbalom was the feature of the show, an instrument capable of taking on many personas. Its performer, Chester Englander, has shaped his career around the instrument, and has inspired composers to write more repertoire for it, some of which was presented on the program. END_OF_DOCUMENT_TOKEN_TO_BE_REPLACED

You wouldn’t expect that acoustic from a glance at the nave, which is wide and long, but not especially lofty. But when I guest conducted a local amateur choir and professional orchestra in Beethoven’s Mass in C there a few years back, during the first rehearsal we released the final chord of the “Gloria” and listened in astonishment for the next several seconds. The sound continued to roll down the space like the big wave that surfers dream about. END_OF_DOCUMENT_TOKEN_TO_BE_REPLACED