“The majesty and grandeur of the English language,” as Henry Higgins put it to Eliza Doolittle, is on glorious display in My Fair Lady, currently on the boards at Ohio Light Opera in Wooster. In a word, this production is magnificent. I’d say perfect, but someone would be sure to quibble. But still, it must be more difficult to produce a stellar version of what is arguably the ‘world’s most popular musical’ than to do a fabulous version of something that no one has ever seen or heard until that very moment. (One can easily confirm this popularity by the number of audience members singing or humming along, under their breath, so to speak, right along with the performers.)

Director Jacob Allen studied this script for several months, while gathering ideas from his technical crew. One cannot have a My Fair Lady without the “Ascot Gavotte”, for instance, but given the size of the stage at Freedlander Theater, and the room needed for sets — and choreography (by the dance wizard, Carol Hagerman) — one does not want the actors to trip over each other. He promised a different Gavotte – and he delivered it! Thanks to the electronic surround sound, we felt like we were inside the track with the (invisible) horses running all around us.

Cleveland native Ted Christopher — in his second go-around in the role at OLO — was born to portray the curmudgeonly phonetics specialist, Professor Henry Higgins, and he does it wonderfully well. His plaintive plea Why Can’t a Woman be More Like a Man? is a question to live through the ages. This time Anthony Maida was Colonel Pickering, while Julie Wright Costa was Mrs. Higgins. Olivia Maughan was a formidable Mrs. Pierce and Freddy Eynsford-Hill was engagingly performed by Stephen Faulk. 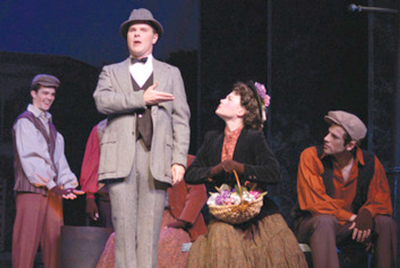 My Fair Lady herself was played by Natalie Ballanger in the performance I saw on July 22. She excelled not only at singing, but also at acting and dancing, as did Dan Neer as Alfred P. Doolittle. Clark Sturdevant and Stefan Gordon were his very talented dancing Cockney cohorts. Of particular notice were the spectacular Cockney dialects on display. You’d have sworn that all those folks had just disembarked from their journey!

The Art Deco set, designed by Kim Powers, was extremely versatile, lending itself beautifully to street scenes, the boxes at Ascot, the Embassy Ball, and various portions of Higgins’ house. Lighting by Weston Wilkerson and sound design by Andy Kauff made it all very realistic. Stephanie Genda outdid herself with the marvelous costumes and totally remarkable hats for the ladies. One almost expected some of the chapeaux to fly off under their own power!

Conductor Lynn Thompson led his orchestra in a brisk but unhurried performance, providing a firm foundation to support the brilliant song and dance happening on the stage. The familiar tunes “On the Street Where You Live,” “Why Can’t the English,” “Wouldn’t It Be Loverly,” “Get Me to the Church on Time,” “The Rain in Spain,” and especially the “Ascot Gavotte,” were exactly as we remembered them from times past. 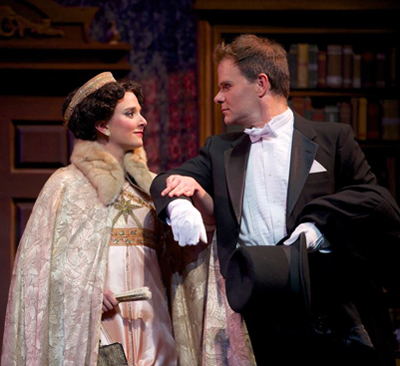 In his notes, director Allen writes that he considers My Fair Lady to be a perfectly constructed ‘golden age’ musical. “There is constant movement, and the relationships are open-ended. Do they get together or not? Decide for yourself,” he advises the audience. Students of George Bernard Shaw’s Pygmalion know that he wrote about people and history, not romance. It was his objection to a musical version of his play that not only quashed several earlier attempts, but also delayed the birth of My Fair Lady until 1956, when Lerner and Loewe just decided to do it.

My Fair Lady plays in repertory at Ohio Light Opera through August 9. Ticket information is available online or by calling 330.263.2345.

Photos by Matt Dilyard courtesy of The College of Wooster.

END_OF_DOCUMENT_TOKEN_TO_BE_REPLACED

The strings-only work by Berg has made relatively frequent appearances on the Orchestra’s programs. In 2021, the musicians recorded it for the In Focus series, and it appeared again on last year’s European tour. Friday’s rendition maintained the group’s characteristic light and effortless playing, each section blending as much as possible to echo the work’s original form as a string quartet. At fifteen minutes total, the piece is quite short, but the dense encoded musical meanings require some extra-attentive listening. Splitting up the three movements ensured that each one could be appreciated on its own. END_OF_DOCUMENT_TOKEN_TO_BE_REPLACED