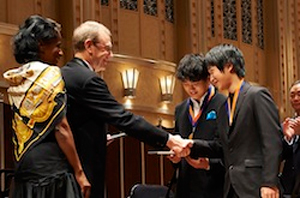 Resuming their ancient tug-of-war for artistic supremacy, Apollo and Dionysius each sponsored a performance of the Tchaikovsky concerto last Friday evening during the final round of the Oberlin Cooper International Violin Competition at Severance Hall with Jahja Ling and The Cleveland Orchestra. It might have been more complicated with a third performance of the Tchaikovsky had not Ming Liu eventually emerged as one of the final three. Her performance of Prokofiev’s second concerto came between Ching-Yi Wei’s and Kyumin Park’s very different takes on the other Russian piece on the program.

First up by way of conductor’s choice was Ching-Yi Wei, 18, from Tainan, Taiwan. His was the Dionysian version, compelling for its physical energy, drive and sense of romantic abandon. After intermission, Kyumin Park, 16, from Seoul, South Korea, brought musical lucidity, variety of tone and a fine sense of pace and scale to Tchaikovsky’s famous showpiece, which seems to respond enthusiastically to different violinistic points of view. Park’s Apollonian reading also boasted a collegial connection to the other onstage musicians, a factor to which the orchestra palpably responded.

Ming Liu, 18, from Shanghai, China, provided a welcome buffer with her elegant performance of the second Prokofiev concerto. Though hardly a barnburner like the other piece on the program, the Prokofiev still provides significant challenges. Not the least of those is its g minor tonality, a difficult key for violinists. Liu played with confidence, poise and consistency of tone. Apollo would have been pleased with her cool emotional quality.

In a remarkable development, following the three performances, the jury decided not to decide between Wei and Park, announcing that the two had tied for first prize. Second prize went to Liu. Apollo and Dionysius, unaccustomed to coming out even, slipped away, declining to be interviewed while competition benefactors Thomas and Evon Cooper awarded the medals and prize money.

It’s best not to place any large bets on the outcome of musical competitions. At every elimination point, one or more of your personal favorites are likely to be voted off the island — or advanced to the next stage for unfathomable reasons, and so it was with this year’s Cooper. Putting all of that aside, congratulations to the three finalists who acquitted themselves so well on the stage of Severance Hall, and best wishes to all this summer’s other competitors. Many of you will be back to have another crack at the top prizes in this and other competitions, and it was an honor to hear you play here in 2013.