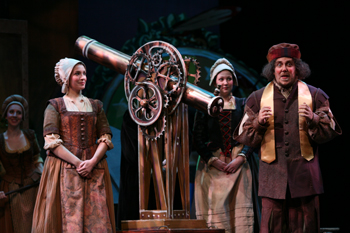 wrote more than a dozen operas for the Esterházy family during his thirty years as its Kapellmeister (plus another late one for London that never made it to the stage). Oberlin Opera Theater’s production of Il mondo della luna (The World on the Moon), which opened on Wednesday evening at Hall Auditorium for four performances, provided the rare opportunity to encounter one of Haydn’s stage works. The evening was entertaining and successful not so much because of Carlo Goldoni’s libretto (ridiculous) or Haydn’s score (every inch masterful though largely unmemorable) but because of Jonathon Field’s resourceful and often hysterically funny stage direction, the fine singing and acting of Oberlin voice students, and generally excellent work from the pit by the Oberlin Chamber Orchestra under guest conductor Christopher Larkin. And also no doubt because of extensive cuts in the score.

Suspend your disbelief for this rundown on the plot: a rich but gullible amateur astronomer (Buonafede) with two closely-monitored but husband-hungry daughters (Flamina and Clarise) and a mistress-maid (Lisetta) who is cheating on him is duped by a professional charlatan (Ecclitico) into taking a trip to the moon to see for himself the exotic images he’s glimpsed through Ecclitico’s fake telescope. An elixir knocks Buonafede out while Ecclitico’s garden is transformed into the moon where he is granted an audience with the Emperor (Ecclitico’s servant Cecco, transformed). Charmed by lunar society, he has his daughters and maid beamed up as well, only to be duped into letting all three of them marry their beloveds (Cecco weds Lisetta, Flamino Ernesto and Clarice Ecclitico). Buonafede returns to earth infuriated to find his fortune gone and his world completely changed, but he ends up forgiving everybody for the ruse and general rejoicing ensues.

All the singers were comfortable onstage, but Davis, King and Thweatt stood out respectively for their three-dimensional characterizations of the bumbling Buonafede, the jovial Cecco transformed into the swaggering Emperor of the Moon, and the duplicitous Lisetta. The numerous recitatives tripped off the singers’ tongues and Dominguez’s and Kelleher’s big arias provided them the opportunity to show off their keen vocal prowess. The Oberlin Chamber Orchestra provided focused and often brilliant support. The winds were especially fine and the continuo playing stylish, though uncredited in the program.

Jean-François Revon’s evocative sets and Chris Flaharty’s period costumes placed the production solidly in the early seventeenth century (about the time the telescope was invented), and when the scene shifted to the Moon, Inda Blatch-Geib’s costumes dazzled with their glittering strangeness (the maidens’ faces painted green, their headdresses spiky, their gloved fingertips glowing with multicolored LEDs).

But the charm of this production came from all the quirky details Jonathon Field provided. The Vulcan salutes on the Moon. The “graceful nymphs” in the supertitle who turned out to be an intentionally awkward corps of moon-maids. The appearance of the Emperor in a barrel (with a handy drop-down bed for later). The strewing of stuffed animals. The quasi-kinky ritual flagellation of men by women. The nonsense “Moon language” verses in the wedding hymn (though hard to read in the supertitles). Buonafide tortured on a wheel of fortune after his return to earth. And best of all, the final chorus with its Gangnam Style chorus line (that and other choreography by Giovanni Campo). All of those elements turned what could have been a long evening with an obscure opera into an engaging piece of theater.