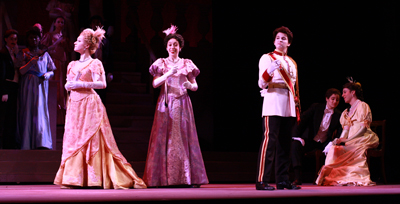 It was clear from the first notes of the overture on Wednesday evening in Hall Auditorium that Oberlin Opera Theater’s Die Fledermaus was going to be a musically distinguished production. Guest conductor Raphael Jiménez and the Oberlin Orchestra (which he regularly conducts in concerts) took brisk tempos and played all the tunes that would come around later with verve and precision, including some wicked violin licks. Jiménez, who has plenty of experience in the opera pit, led a tight performance of the entire operetta, closely partnering singers and infusing the orchestra playing with enough Viennese rhythmic nuance to sound authentic.

The opening night cast for Johann Strauss II’s dizzy tale of a Viennese practical joke that gets repaid with interest was strong, confident and wonderfully comedic. Standouts were soprano Aubry Ballaro-Hagadorn as the maid, Adele, soprano Alexis Aimé as Rosalinde, Nicole Levesque as Prince Orlofsky and tenor Daniel King as Alfred. Bright and vivacious, Ballaro-Hagadorn nailed nearly all of her ornate coloratura passages. Rich-toned and dramatic, Aimé was particularly splendid in her faux-Gypsy aria. Levesque’s compact, focused mezzo gave just the right vocal ambiguity to Orlofsky, and her Russian accent was appropriately over the top. Singing with focused brilliance, King played the loveably annoying, non-stop Italian tenor with pennacchio. 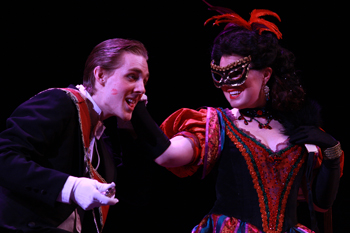 Also strong as singers and actors were Rob McGinness as Gabriel von Eisenstein, the original perpetrator of the practical joke, Bill Townsend as Dr. Falke, the butt of the joke who engineers the payback, Daveed Buzaglo as Frank the prison warden, who finds himself embroiled in the plot, Michael Todd Patterson as Dr. Blind, the clueless lawyer, Danielle Cheiken as Sally and Anna Trumbo as Ivan.

Director Jonathon Field had some gender bending fun with the chorus. When they came to life at the top of act two, it took a long minute to notice that some of its couples were cross-dressing. Some but not all, a brilliant stroke that riveted the attention through the rest of the act. Just in case you didn’t get it, one basso in a dress boomed out “stop that!” when patted on the derriere. The ensemble sang beautifully and impressively in sync with the orchestra.

Field saved much of his signature zaniness for the beginning of the third act, when Joseph Trumbo as Frosch the jailer delivered a side-splitting, drunken (and stoned — “don’t worry”, he said, lighting up, “it’s only medicinal”) monologue studded with Oberlin in-jokes and a dangerous-looking back flip. 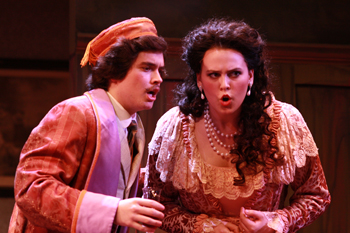 Mark Kobak’s evocative sets gave the singer-actors two prominent sets of stairs to work with. The chorus was splendidly displayed on their many levels in act two, at the end of which Eisenstein and Frank, who tried to get into the same coat, stumbled up them like Siamese twins. Steep stairs with a landing in the prison gave the still-inebriated duo and Frosch an excellent platform for flailing about, while street-level windows at the top of the set afforded previews of the many arrivals in Act III (Frosch: “Most people are trying to get out of here”).

The production was visually enhanced by Chris Flaharty’s colorful, period costumes (especially festive for Orlovsky’s party) and the fine lighting design by Jeremy K. Benjamin. Special effects were limited but effective: picking out soloists at the party with pin spots was a great touch. Many shows sung in English still come with English supertitles. Not so with Fledermaus, and none were needed. Nearly every word from soloists and chorus came across perfectly.

Fledermaus was a highly entertaining evening of music and theater admirably free of opening-night glitches and first-performance nerves. A second cast takes over for Friday evening and Sunday afternoon’s shows. This cast returns on Saturday evening.

Although the Museum had just opened again earlier in the week, in-person concerts were not on the agenda. Instead, Classical Piano Series director Emanuela Friscioni and her husband Antonio Pompa-Baldi invited a virtual audience into their handsome, sun-dappled music room for an intimate, exquisitely-played program of four-hand piano works by Schubert and Debussy topped off with the premiere of a new work by their fellow Italian, Luca Moscardi. END_OF_DOCUMENT_TOKEN_TO_BE_REPLACED

END_OF_DOCUMENT_TOKEN_TO_BE_REPLACED

Northeast Ohio’s Les Délices has long been that rarest of beasts: a world-class organization so proud of its region (ours) and repertoire (distinct niches in pre-1800 music) that it never tries to be everything to everyone, paradoxically making a strong case for a broad, curious international following. In the December episode of its SalonEra series, the ensemble embraces its strengths and community to marvelous effect. END_OF_DOCUMENT_TOKEN_TO_BE_REPLACED