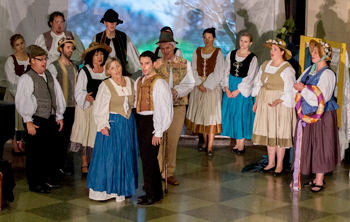 The action is far from the verismo naturalism that underlies, and grounds, Puccini’s greater operas. Set in a fairyland German forest, the opera begins with Roberto (tenor Matthew Miles) leaving his village to collect an unexpected legacy from an aunt in the city. His fiancée is Anna (Opera Circle executive director and soprano Dorota Sobieska) who has a bad feeling about his departure. Roberto’s impassioned pleas (“never doubt my love!”) do not assuage her fears. Nonetheless, her father Guglielmo (baritone Jeremy Gilpatric) joins the villagers in a dance and then a prayer for the couple. 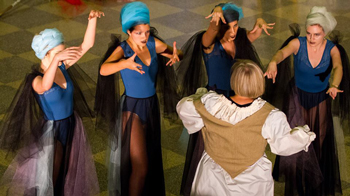 In the second act, Anna’s fears come true with Gothic excess. A narrator tells us (in grandiose Dantesque verses) that, in the city, Roberto has fallen to the charms of “una sirena” and has indulged in unnamed orgiastic delights. In ballet and pantomime, we come to understand that Anna, in grief over her abandonment, either dies or becomes absorbed into the undead company of the “villi,” spirits of abandoned women. Her father calls on the villi to fulfill the legend—they take revenge on faithless men, so he calls on them to do so now. Roberto comes home, haplessly seeking forgiveness, but finds only Anna’s curse and the vengeance of the villi.

As Dorota Sobieska said in her warm welcome to the audience, the opera is a collection of fragments – dance, pantomime, aria, ensemble numbers. There are some moments in which the future genius of Puccini is apparent, but they occur irregularly, and usually without follow-up.

Apparently, though, the opera can be effective: a performance at the Spoleto Festival USA this summer seems to have had the audience enthralled (a few minutes can be found on YouTube). 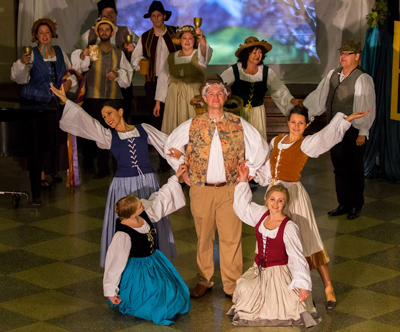 This production by Opera Circle did not seem to find whatever it takes to bring off Le Villi. The actors, perhaps unaccustomed to the space (Tucker Hall at St. Paul’s in Cleveland Heights), seemed uncertain about how to move. The lighting was uneven, to the point of glaring into the eyes of some patrons, who were seated in chairs on three sides of a long and usually empty performing space. Supertitles were hard to read—projected onto a loose sheet over pictures, without enough contrast, and blocked for some of us by stage furniture. The chorus sang with energy and appeared to enjoy themselves; four non-singing dancers were especially effective as the vengeful villi in Act Two.

The lead cast was startlingly uneven. Matthew Miles sang the part of Roberto with clear diction and plenty of gumption on his demanding high B-flats. In the romantic duets, however, he overpowered Dorota Sobieska as Anna, whose diffuse soprano tone was particularly muted in the first act. The third lead, baritone Jeremy Gilpatric, lacked strength in the lower range, and seemed to be trying so hard for effect that he often missed bringing out the vocal line that is essential for Puccini.

Appropriately for the scale of this chamber production, the orchestra was reduced to three—Jacek Sobieski (piano), Hristo Popov (violin), and Kent Collier (cello). The lack of a conductor caused considerable rhythmic uncertainty in moments where a tighter and more nuanced ensemble would have helped.

I went to this performance because I was curious about Le villi and the itinerant opera company that was putting it on, Opera Circle, which I had never seen and which is now in its 18th season. In each I found some positive aspects, but came away from the evening disappointed.

Comparing my response to that of others who have quite positively reviewed earlier Opera Circle performances, I suspect that this disappointing production might have been something of an anomaly. Cleveland can certainly use more opera, and this kind of intimate chamber opera might well help to fill the gap left by the departure of Opera Cleveland. I hope that, with some reshuffling of priorities, Opera Circle may go on to play a continuing role in Cleveland’s opera life.

Nicholas Jones is Professor of English at Oberlin College.

Jackson began the program with a recitation of Langston Hughes’ poem “Helen Keller” — the first of five poems by Hughes that served as interludes between each piece on the first half. END_OF_DOCUMENT_TOKEN_TO_BE_REPLACED

Pianos with pins and tape on strings, a bass drum and tam tam, crotales, Almglocken, and vibes. Microphones were hooked up all around the instruments. The feed was sent to speakers around the room. Lighting designer Nicholas Houfek hung incandescent globes over the arrangement of instruments from thin black wires stretching across the beams. END_OF_DOCUMENT_TOKEN_TO_BE_REPLACED

From the podium, Elim Chan set an ambitious tone for the evening. The rising star conductor, here in her Cleveland Orchestra debut, has a commanding style, and every twist and turn in Saturday’s performance tracked closely with her baton. END_OF_DOCUMENT_TOKEN_TO_BE_REPLACED