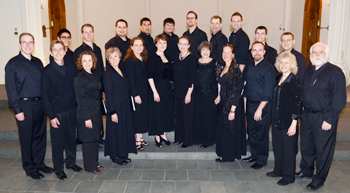 Ross Duffin and the twenty voices of Quire Cleveland turned their attention to nearly three hundred years of American music on Sunday afternoon at Historic St. Peter Church in downtown Cleveland, visiting some well-known tunes in lesser-known packaging and dusting the cobwebs off some fine music that deserves to come down out of the attic and be heard once again.

Duffin led off with his own four-part arrangement of The Star-Spangled Banner, probably the first time most members of the audience had heard — or even been aware of — all four of its stanzas. The arrangement was artful even if some of Francis Scott Key’s verse is overwrought (and lines like Their blood has wash’d out their foul footstep’s pollution challenged the normally admirable diction of the group).

The antebellum first half of the program included stern Puritan psalms from The Bay Psalm Book nicely softened and varied by Duffin’s arrangements, a set by William Billings and his circle that included the well-known round, When Jesus wept, and I am the Rose of Sharon, plus two amusing choruses about music-making, Daniel Read’s Down steers the bass, and Billings’s Modern Music.

Lowell Mason’s expressive O look to Golgatha from 1843 with its Bach chorale-like ending was a real find, and William Walker’s 1847, three-part version of Amazing Grace provides an attractive alternative — with its near-Shape Note harmonies — to the versions we usually hear. Duffin effectively “orchestrated” it to alternate male and female voices and solos.

Lovely, sentimental settings of Flow gently, sweet Afton (Burns) by Spilman and Warren and Stephen Foster’s Come where my love lies dreaming (with the sopranos deployed in the organ gallery) opened the second half and lead to Duffin’s next Real Find, Oliver Wendell Holmes’s 1869 Peace Prayer, set to a sophisticated hymn-like tune by Matthias Keller (and originally sung by 10,000 voices at a Jubilee in Boston celebrating the end of the Civil War).

Cleveland composer Patty Stair (1868-1926) was acknowledged by her Minuet for women’s voices and So sweet is she for men’s, both charming pieces that should find their way into the repertoire of single-sex glee clubs. Amy Beach’s Shakespeare setting Through the house give glimmering light (women) and “Edgar Thorn’s” (aka Edward MacDowell) The Witch (men’s voices) should win more modern performances as well.

Ross Duffin created a rich banquet of song for this concert. Quire stepped up to the table with a hearty appetite and sang through its multiple courses with thorough professionalism and admirable stamina. And there was dessert: Quire spread out to the four corners of the audience for a sing-a-long reprise of When Jesus wept. An odd way to end, but fun.

Published on ClevelandClassical.com April 8, 2014
Click here for a printable version of this article.
Return to the website.

END_OF_DOCUMENT_TOKEN_TO_BE_REPLACED

Then, you heard all the qualities that make for a stunning soloist. Winner of the 2013 Cleveland International Piano Competition, Khristenko was back in town this month for a recital in Piano Cleveland’s summer series, Piano Days @CLE. And he couldn’t help but revel in the spotlight a little, even as he settled into a more collaborative role at the keyboard for his program, “Stanislav and Friends.” END_OF_DOCUMENT_TOKEN_TO_BE_REPLACED