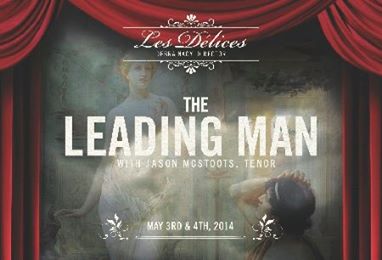 Through a combination of scheduling conflicts and the sin of sloth, I had never heard a performance by the highly regarded Cleveland Baroque ensemble Les Délices until Sunday afternoon May 4, in the Herr Chapel at Plymouth Church, Shaker Heights. Les Délices are artists in residence at the church, so this was home base, although they regularly perform in other venues around town. The evening before they had presented this program, “The Leading Man,” at the William Busta Gallery. These concerts ended their 2014/15 series, and the Sunday afternoon concert was, with a couple of niggling reservations – more about them later – an unalloyed pleasure.

Boston-based tenor Jason McStoots was the featured soloist in a program of excerpts from 18th century French operas (all written in the span of four years from 1745-1748), with an added set from Jean-Baptiste Lully’s 1684 opera Amadis. Each set included one or two vocal selections, plus instrumental movements to put the airs and recitatives into context. Oboist Deborah Nagy, leader of Les Délices, gave remarks about the operas and music preceding each set to the nearly-full house.

The “leading man” of the concert title referred to the most famous mid-18th century French tenor, Pierre Jélyotte, who was star of the Paris Opéra for more than twenty years. Known for his high, flexible but heroic voice of great beauty, his exquisite musicianship and his affecting acting, Jélyotte also had a cultivated reputation for kindness and modesty. His voice type, haute-contre, continues to be a source of debate. It is thought that the haute-contre used a regular singing voice through most of his range, with some high notes sung in falsetto, a practice that would strike modern listeners accustomed to tenors singing full voice into the highest register as bizarre.

The earliest of the selections, from Lully’s Amadis (1684), opened the program, with its sharply etched “Overture,” followed by the recitative “Ah! Que l’Amour paraist charmant!” (Ah! How charming love appears!) and the lyrical air, “Bois espais debouble ton ombre” (Dense woods, redouble your shadows) In the recitative and air, Amadis is hiding from a sorcerer, lamenting that he may not see his lover again. Jason McStoots wielded his lyrical but robust voice beautifully.

Here we come to a reservation about the venue: the instrumental music fared extremely well in Herr Chapel, but the room was simultaneously too small and too reverberant for Jason McStoots’s voice. There was not enough space for the instrumental and “bloom” of vocal sound to develop well. Stated simply, it was at times too loud. Oddly enough, one could imagine the sound being more successful in the dryer acoustic of the gallery. 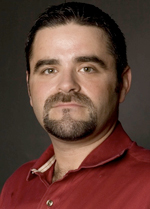 Jean-Marie Leclair’s Scylla et Glaucus (1746) involves the legend of how Glaucus, who loves the beautiful Scylla, is double-crossed by Circé, causing Scylla to be drowned and turned into a rock near the pit of Charybdis. The celebrative instrumental “Mouvement de Forlanne” is a dance in triple rhythm, alternating loud phrases with echo-like quiet passages. The Récit and Air “Peuple de de climates”/”Chantez, chantes l’Amour” sing of Glaucus’s great love for Scylla. Jason McStoots here, as elsewhere in the program, captured the overarching concept of French Baroque opera, that the text (as over-the-top as the emotions expressed might seem to modern ears) is of paramount importance, with gracious ornamentation emphasizing clarity of diction in conjunction with musical phrase. Ardor was the emotion here; the vocal line is florid, with trills and other ornamentation. There is a brief “da capo,” although not full-blown as would be found in Italian operatic arias, more a repetition of a few phrases.

Jean-Philippe Rameau’s Platée (1745) has become one of the most revived French Baroque operas in modern times. The plot involves flogs, including the vain Platée, a travesty (i.e., drag) role for which Pierre Jélyotte was especially noted. Two airs were separated by a charming instrumental “Tambourins” which included repeated “quacking” notes in the oboe’s low range. The air “Quoi! Faut-il tes attendre encore” (What? Must we wait for you?) featured a beautiful oboe obbligato with the tenor and continuo. The set’s closing “Chaconne” was one of the highlights of the concert. Alongside oboist Deborah Nagy, the other musicians, Scott Metcalfe and Cynthia Black, violins, Josh Lee, viola da gamba, and Michael Sponseller, harpsichord, were also all top-notch throughout the afternoon.

Modern audiences are familiar with the Daphnis and Chloé story via Maurice Ravel’s 1912 ballet music, but the myth was also a favorite topic for Baroque opera composers. Joseph Bodin de Boismortier’s 1747 opera was typical, with charming instrumental movements and moving arias. The air “Beaux lieux…” (Lovely environs) was tender, almost melancholy, with a contrasting middle section and more developed da capo return to the first music of the air. Nagy’s lovely recorder obbligato contributed to the pastoral mood. The set concluded with a beautiful, somber “Musettes” for two violins and gamba, later adding the harpsichord and oboe.

The final set on the program was from Rameau’s 1748 opera-ballet Pygmalion (centuries later of Bernard Shaw and Lerner and Loewe fame). The highlight of the set, and Jason McStoots’s finest performance of the concert, was the heroic coloratura Ariette “Règne, Amour” (Reign, Love, let your flames shine forth). His melismas were clear, with added ornamentation, and perfect control of pitch and diction. It was a brilliant performance by a fine young artist.

Les Délices showed great skill in their program planning, fulfilling the adage “leave the audience wanting more.” The concert was performed without intermission and lasted almost exactly an hour – it was “just right.” Further kudos to the group for providing complete texts and translations in the program.

My other reservation about the concert experience had to do with the ubiquitous audience survey required by most non-profit funders, which at this concert seemed intrusive. Upon entering the venue I received a personal spoken admonition to fill out the survey; before the concert began, there was another request to fill it out; and during Deborah Nagy’s mid-concert remarks, she again encouraged people to fill it out. It was too much, and at least for this listener, detracted from the overall beauty and success of the concert.

Romantic love has worked its magic and wrought its afflictions on humankind in similar ways throughout history. Last weekend, Cleveland’s Les Délices joined Boston’s Blue Heron to chronicle how 14th-century European composers addressed that subject. The matrix for the collaboration between the ensembles was the celebrated Roman de la Rose, whose earliest layer by Guillaume de Lorris dates from ca. 1230. END_OF_DOCUMENT_TOKEN_TO_BE_REPLACED

Despite predictions of snowy weather, there was a full house and enthusiastic audience at the Bop Stop on Friday evening, January 17, for the latest concert by the Cleveland-based new music group No Exit, collaborating with their Twin Cities counterpart Zeitgeist. The program was concise and wildly varied, with several first performances. Each work contained imaginative soundscapes and alluring musical ideas. END_OF_DOCUMENT_TOKEN_TO_BE_REPLACED