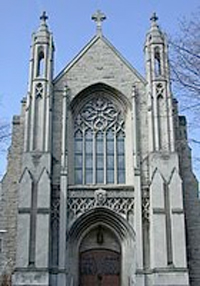 This past Sunday the Youngstown Symphony, directed by Randall Fleisher, played its third Stained Glass Concert at the Martin Luther Lutheran Church, one of the city’s most beautiful places of worship. This new series, instituted last year, involves visits by a small orchestral core to area churches, and interaction with local ensembles. The stunning sanctuary gave the impression of an old European church, with a delicately latticed hand-carved wood altarpiece.

The concert amounted to a lively mélange of short classical chestnuts combined with some popular pieces. The afternoon’s highlight was the performance of Mozart’s Ave Verum Corpus by the Martin Luther Lutheran Church Chancel Choir accompanied by the Youngstown Symphony. Anthony Ruggiero, choir director, had prepared the small group well. The lovely gentle choral sounds melded beautifully to the accompanying strings.

The performances of two movements from the Vivaldi Four Seasons were just as wonderful. Concertmaster Calvin Lewis served as the soloist for Spring, and the other violins divided to depict individual birdcalls. Lewis was excellent and the small orchestra, gorgeous. Summer seemed to suggest a thunderstorm with rain and lightening, and Lewis again played with flair. The Bach Air on the G String from the Suite No. 3 for Orchestra, was the other Baroque era piece performed. The tempo seemed a bit fast for this moving work.

Fleischer conducted his own attractive arrangement of Jerusalem of Gold, a traditional Hebrew song. Inspired by his visit to the Wailing Wall, the last vestige of the original temple, the piece began with a free section and a Middle Eastern-sounding flute line, followed by a foreground cello section lead and an interesting doubling of French horn and flute. After another Middle Eastern treatment, this time on the oboe, a loud melodic statement appeared in French horn and trumpet, followed by a full thematic rendition on solo cello. A hint of the beginning of the Israeli National Anthem closed the piece.

To close the concert, a trio of area singers, James McClellan, Eric McClellan, and Janeen Williams, accompanied by the Chancel Choir and the Symphony, sang three popular numbers. These were I Believe in Every Drop of Rain that Falls, Go Into the World, and A Mighty Fortress is Our God. The latter, Martin Luther’s old hymn, received a surprisingly rapid arrangement.

Jackson began the program with a recitation of Langston Hughes’ poem “Helen Keller” — the first of five poems by Hughes that served as interludes between each piece on the first half. END_OF_DOCUMENT_TOKEN_TO_BE_REPLACED

Pianos with pins and tape on strings, a bass drum and tam tam, crotales, Almglocken, and vibes. Microphones were hooked up all around the instruments. The feed was sent to speakers around the room. Lighting designer Nicholas Houfek hung incandescent globes over the arrangement of instruments from thin black wires stretching across the beams. END_OF_DOCUMENT_TOKEN_TO_BE_REPLACED

From the podium, Elim Chan set an ambitious tone for the evening. The rising star conductor, here in her Cleveland Orchestra debut, has a commanding style, and every twist and turn in Saturday’s performance tracked closely with her baton. END_OF_DOCUMENT_TOKEN_TO_BE_REPLACED