There are rare, perfect moments in chamber music where minds meld and hearts coalesce in beautiful synergy. Violinist Nathan Meltzer and pianist Evren Ozel, both young phenoms, did just that with their pre-concert performance of Franck’s Violin Sonata during ChamberFest Cleveland’s Folklorica on Sunday, June 23 in CWRU’s Harkness Chapel. On an afternoon packed with stellar musicianship, the two distilled Franck down to its exquisite essence. I doubt I will ever hear a better rendition.

ChamberFest’s musicians span four generations, and their Rising Star program brings in highly gifted young musicians at the springboard of their careers. Meltzer has quite an impressive international resume already as the youngest ever winner of the Windsor Festival International String Competition. He performs on the 1734 “Ames, Totenberg” Stradivarius violin. Ozel won first prize at the 2016 Boston Symphony Concerto Competition and second prize at the 2016 Thomas and Evon Cooper International Competition. Both are nineteen. Although their performance, which also included Ponce’s Estrelita, was a prelude to the main event, it set a very high bar.

There were many sensational aspects of the Franck — Meltzer’s infallible intonation, Ozel’s intimate articulations, their seamless coordination — but most convincing of all was their pure, limitless vision of the piece. They simultaneously stayed firmly in control of the music but also gave in to its revelry. Of course, the Franck is a masterful creation, and its enchanting melodies usually sound fine no matter what. Meltzer and Ozel attended to every contour of the music with care, crafting a longform melodic idea that flowed effortlessly from phrase to phrase and movement to movement. It was a privilege to witness.

Folklorica explored the ways composers interact with and evoke folk traditions, and the main program began with Paul Wiancko’s American Haiku. Violist Hsin-Yun Huang and cellist Nicholas Canellakis had fun with it, approaching this bit of Americana with humor and zeal, which was a nice change of direction from the sheer magnitude of the prelude.

Meltzer returned with pianist Roman Rabinovich for Bartók’s Rhapsody No. 1, “Folk Dances,” handling the unflinching music with great determination. Meltzer made it sound about as easy as it can sound — which is to say, still blisteringly difficult. 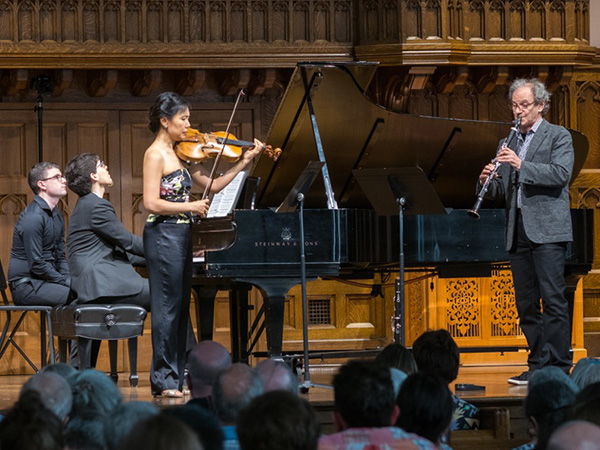 Clarinetist Franklin Cohen joined Huang and Ozel for Max Bruch’s Eight Pieces, of which they smartly selected four. Bruch’s indulgent, rhapsodic music is fairly heavy, and programming all eight of the pieces often feels like overkill. They gave a dedicated performance — Huang carving a lush interpretation of the “Allegro con moto” and Cohen sparkling in the “Andante con moto.” 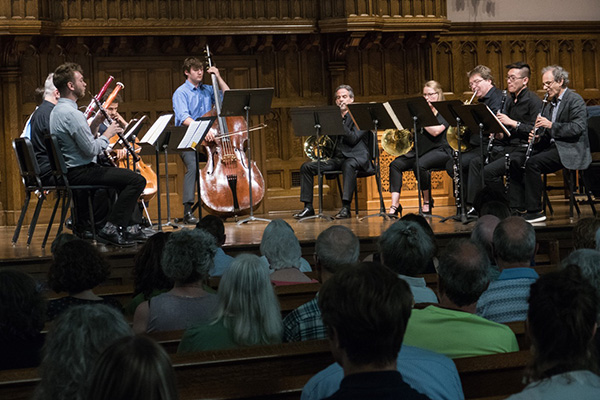 Eleven musicians sat semicircle for Dvořák’s Wind Serenade, which they performed conductorless to close the concert. Dvořák’s music is dense, windband-esque in the best way, and in such a live venue it could have easily spun out of control. Happily, they reigned it in with remarkable reserve. From the get-go, oboist Liam Boisset led the ensemble in both musicality and pace. His sound emerged regal and splendid in the opening proclamation, and his clear direction kept the entire thing afloat.

The “Menuetto: Tempo di Menuetto” was warmly pastoral, a nod to the Serenades of Brahms. Clarinetists Cohen and Ben Chen played cheekily, contrasting the movement’s more serious melodies. The boisterous, jolly finale was a celebration for all — Canellakis, largely subjugated to accompaniment for the previous three movements, tore into the ferocious cello part, and the horns sounded off triumphantly. Kudos to ChamberFest for programming and masterfully executing this ambitious work.