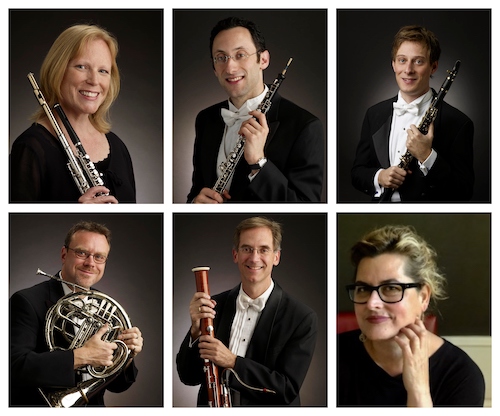 Lately, wind players have only been sighted here and there on the calendar, and have mostly performed all on their lonesome. That makes the finale to the Rocky River Chamber Music Society’s 62nd season an extra special occasion for anyone with a fondness for music of the lungs.

Five members of The Cleveland Orchestra’s wind section — flutist Mary Kay Fink, oboist Frank Rosenwein, clarinetist Robert Woolfrey, hornist Richard King, and bassoonist Barrick Stees — will come together on the stage of West Shore Unitarian Universalist Church on Monday, May 17 at 7:30 pm for a live-streamed concert that can be viewed on Facebook or YouTube.

On opposite ends of the program are woodwind quintets by Anton Reicha and Valerie Coleman, two composers who also come from opposite ends of the genre’s history. In between, pianist Christina Dahl will replace Fink to showcase a different but related species of quintet, represented here by Beethoven.

Logistics first: Pfizer, Moderna, and Johnson & Johnson are a big reason why this concert can take place. “We’re all fully vaccinated, so that’s helpful,” Stees said in a telephone interview. “We’re also rehearsing in large spaces.”

As for the program itself, its construction began around the nucleus of the wind players. “But in order to provide a program of some variety, it’s always good to ask a guest to join you,” Stees said. “A number of us are good friends with Christina Dahl — Tina. We asked her to perform the Beethoven with us, and she was happy to do it.”

That Beethoven would be his Op. 16 in E-flat, which was likely inspired by Mozart’s work for that same combination in that same key. “It was also a really good vehicle for Beethoven to highlight his skill as a pianist,” Stees said.

“It was a very early work — he was establishing himself in Vienna — and it was small and portable, as opposed to an orchestra piece.” That allowed it to be premiered in an intimate space in Vienna: what became in 1824 the Café Frauenhuber, which remains the city’s oldest coffeehouse. “It’s still there, and I’ve visited from time to time,” Stees said. “It’s in the old city, and there’s a plaque on the front of it that says the quintet was premiered there in 1797. It’s great to go back there.”

Two of Beethoven’s contemporaries, Anton Reicha and Franz Danzi, were key figures in establishing the wind quintet as a genre. “What Beethoven and Haydn did for the string quartet, Reicha did for the wind quintet,” Stees said. Of Reicha’s 24 quintets, Monday’s selection — the Op. 88 in E-flat from 1818 — is considered one of the strongest. 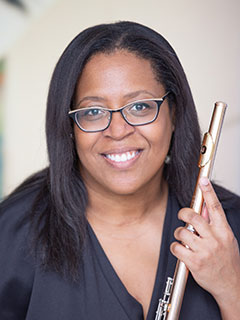 The final piece on the program is by far the most recent: Valerie Coleman’s 2011 Tzigane. Stees noted her history as the founder and longtime flutist of the Imani Winds. “She’s a very gifted arranger and composer, as is Jeff Scott, the group’s horn player.”

Those individual composing talents, combined with the group’s commissioning prowess, have resulted in what Stees called “a big repertoire that wasn’t there before their existence,” including music by many composers of color and composers from diverse musical backgrounds. (Read about their Legacy Commissioning Project here.)

Speaking of the present day, Stees thinks that the genre of the wind quintet is just now coming into its own. “I really feel like the 20th and now the 21st century have been the golden period for the quintet,” he said.

A big reason is the change in how composers have approached this unique instrumentation. “The quintet does not naturally blend well like a string quartet, a saxophone quartet, or a brass quintet,” Stees said. “Wind instruments all make their sounds in different ways — they have a more heterogeneous character.”

The quintets of Reicha and Danzi were modeled after the string quartets of Haydn and Beethoven, Stees said. “There’s nothing wrong with what they did, it’s just different.” On the other hand, 20th-century composers such as Ligeti and Barber “featured the personalities of the different instruments, as opposed to making them subjugate those personalities to form a homogenous sound.”

I didn’t ask Stees if Coleman also falls into that modern category of quintet writing, but just a few minutes of listening to her Tzigane (recorded here by the Imani) will show off the fascinating personalities not just of the different instruments, but of each individual player, and the composer herself.

END_OF_DOCUMENT_TOKEN_TO_BE_REPLACED

Concerts cancelled in 2020 may have put a brief gap in Ling’s record with the Orchestra (a program every season since 1984-1985), but the ensemble’s former resident conductor more than made up for it Sunday with a performance both commanding and personal. END_OF_DOCUMENT_TOKEN_TO_BE_REPLACED