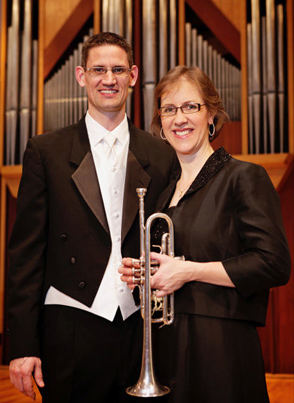 On Monday evening, November 18, the Rocky River Chamber Music Society took the welcome step of acknowledging that their performance space houses a pipe organ by presenting organist Timothy Olsen and trumpeter Judith Saxton in a program of music that effectively conjoined the two instruments. A popular combination in France, solo trumpet with organ is not so often encountered in the States, though there’s plenty of literature to explore.

The duo, who hail from North Carolina, presented an entertaining mix of Baroque and 20th-century music, including works by Telemann, Krebs, J.S. Bach, Viviani, and Handel in the first category, and Václav Nelhýbel, Calvin Hampton, Shostakovich, and Saxton herself in the second.

Saxton’s mellow, golden tone adorned a chorale setting by Krebs, two arias by Handel, and Nelhýbel’s Sonata da Chiesa No. 2. Olsen played continuo for the Baroque pieces, but had an equal role in the Nelhýbel. He also contributed solo organ works — a clean, sparkling reading of Bach’s Toccata, Adagio and Fugue, and vivid performances of two movements from Hampton’s Five Dances for Organ. The latter piece has local connections, Hampton having studied at Oberlin, and the Dances having been commissioned by Walter “Chick” Holtkamp Jr., whose company built the organ in West Shore Unitarian Universalist Church.

Judith Saxton’s three-movement Landfall from 2019 was inspired “by the distinct wildlife and flora in the surrounding coastal environment of Wilmington, North Carolina.” Its “Caretta caretta” resembles passacaglia variations. “Airlie Gardens” is a lovely cantilena. “Turtle Grande” alternates organ and trumpet — the latter muted in various ways.

The duo ended their program with a jolly excursion through Shostakovich’s Polka from The Golden Age.

Northeast Ohio’s Les Délices has long been that rarest of beasts: a world-class organization so proud of its region (ours) and repertoire (distinct niches in pre-1800 music) that it never tries to be everything to everyone, paradoxically making a strong case for a broad, curious international following. In the December episode of its SalonEra series, the ensemble embraces its strengths and community to marvelous effect. END_OF_DOCUMENT_TOKEN_TO_BE_REPLACED

END_OF_DOCUMENT_TOKEN_TO_BE_REPLACED

Another I remember fondly is Gian Carlo Menotti’s Amahl and the Night Visitors.  Commissioned by NBC, the one act, made-for-television opera, premiered on December 24, 1951, at the network’s studios in New York’s Rockefeller Center. And now, through the wonders of technology, Cleveland Opera Theater has created a magical new production of the work which is available on demand through January 6, 2021 (Three Kings Day). END_OF_DOCUMENT_TOKEN_TO_BE_REPLACED

Jessen has now followed up with her second solo CD, Winter Chapel. Recorded on January 17, 2020 in Oberlin College’s Fairchild Chapel and available on Carrier Records, the album is a continuum in Jessen’s journey to push the musical boundaries of her instrument and herself as an improviser. END_OF_DOCUMENT_TOKEN_TO_BE_REPLACED