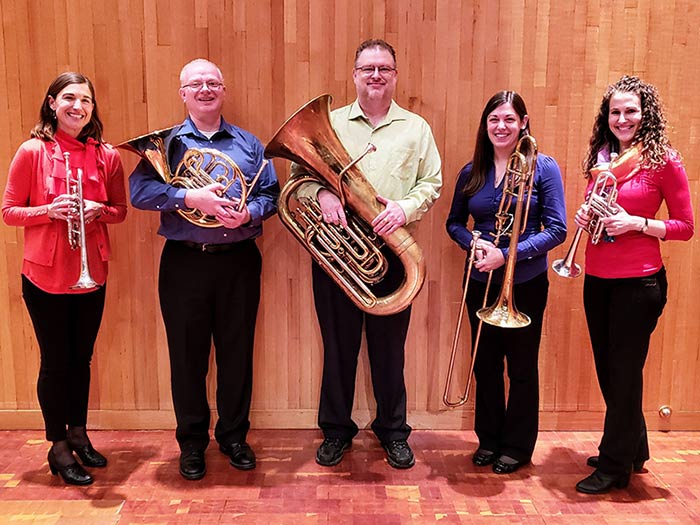 After COVID struck, the Rocky River Chamber Music Society was one of the area’s first organizations to set up a live-streamed concert, the Society’s season finale in May.

One of the performers that night was trumpeter and board member Amanda Bekeny, who now brings her Diamond Brass Quintet colleagues to West Shore Unitarian Universalist Church to open the series’ 62nd season on Monday, October 12 at 7:30 pm.

Joining Bekeny will be trumpeter Nina Bell, hornist Greg Hills, trombonist David Mitchell, and tubist J.c. Sherman. Their program, live-streamed only, will include works by J.S. Bach, Victor Ewald, Stravinsky, Eric Ewazen, and Anthony DiLorenzo, and can be accessed on Facebook or YouTube.

Phenomenal player, great teacher, superstar freelancer: those are the words that RRCMS music director Dan McKelway used to describe Bekeny back in May.

I’ll add to that a few adjectives of my own. First, humble — the trumpeter gave a hearty laugh after I shared McKelway’s “superstar” compliment. And second, down-to-earth — after a very short delay at the start of our Zoom call, she explained that she hadn’t had the right TV show on for her 3-year-old. (Apparently, Daniel Tiger’s Neighborhood wasn’t good enough.)

We got underway by discussing her multifaceted career, which includes teaching posts at the College of Wooster and Kent State University, and frequent performances with CityMusic Cleveland, the Firelands Symphony, and Olympic Brass Quintet (in addition to Diamond).

Amanda Bekeny: What I love about my career is that there’s a variety of things that I do. Sometimes I’m playing with a full orchestra. Other times I’m collaborating with a few friends, directing an ensemble of my trumpet students, teaching, or getting ready for a solo performance. And because I’m a freelancer, I’m always working with different people — so I’m not waking up and doing the same thing every day.

Jarrett Hoffman: What’s the state of freelancing at this point in the pandemic? I know that the gig situation has improved a little bit, though I don’t know how much. 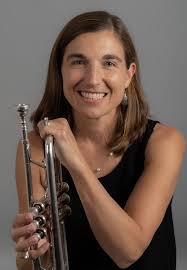 AB: It’s funny, I played a couple of outdoor chamber concerts in the summer, and then in just the last few weeks, there’s been this push to have some outdoor concerts before winter comes — so there’s been some of that. I was also fortunate over the summer to win another job teaching at Kent State. I’m lucky I have my teaching work because playing is still so limited and isn’t the same — we’re not sitting in a concert hall doing Mahler 5. It’s little stuff, which is certainly wonderful, but live classical music with a full orchestra? We’re not there yet.

JH: In terms of classical music not being quite the same yet, your quintet will be giving a streamed concert at West Shore Unitarian — will it be live or pre-recorded?

AB: It’s going to be live at the church, and we are taking extra precautions. We’ve been trading off rehearsing at different people’s houses — today it’s 50 degrees, and we’ll be in my backyard (laughs). I’ll make some hot tea, and we’ll bundle up. For the concert, we’ll space ourselves farther apart than normal, and we’ll have plexiglass in front of our bells. Our first set is sixteen or seventeen minutes, then we’ll go outside and air out the space. We’ll come back in, play for fifteen minutes, again leave for seven to ten minutes, then do one more set.

JH: So for the audience, it will be like having a couple of short intermissions.

AB: Exactly, and there will be program notes, some photos, and I think even a little interview — or a feature with one of us talking — so the audience won’t just sit there with nothing else going on.

JH: Getting into the program, are there any themes or particular pieces that you want to highlight?

AB: Being musicians who’ve spent most of the summer not performing, we wanted to jump out with new stuff — music we hadn’t done in a while, or that we had never done. And there’s a little theme we came up with: “Fugue and Fire.” There’s the Bach [Prelude and Fugue in E-flat], which is in the middle portion of the concert. It’s originally for organ, and it was arranged by one of the board members of the Chamber Music Society.

We try to avoid too many transcriptions — we like playing stuff that’s written for our type of ensemble — so we said, let’s do some Ewazen. He teaches at Juilliard and has written a lot for brass. Well, the second movement of his Frostfire has a fugue in it as well. Then in terms of fire, we’ve got Fire Dance by Anthony DiLorenzo. It’s a really quick, upbeat — well, fiery kind of piece.

JH: You’re also doing Ewald’s Brass Quintet No. 3, one of four he wrote.

AB: He was actually a cellist, but he had a love for brass instruments. He was a late Romantic composer, and that was a time when people weren’t writing for brass, so he’s kind of like our Brahms. A brass quintet concert should really include something by Ewald if you want it to be rich and beautiful.

JH: I read that he was also an engineer and an architect.

AB: Right, music was not how he made his living!

JH: Like the Bach, the Stravinsky Suite isn’t originally for brass quintet. [It’s a transcription by Arthur Frackenpohl of the piano pieces “Balalaika,” “Andante,” “Española,” and “Galop.”]

AB: Right. They’re four really short, blasting, exciting — I guess you could say fiery — pieces. They go by really quickly, and they show off the players’ high chops.

[In closing, we’ll wish the Diamond Brass Quintet well in their performance. And a final note to the makers of Daniel Tiger’s Neighborhood — step up your game.]

Le mariage aux lanternes, the evening’s curtain-raiser, is about Guillot (Bradley Boatright) and Denise (Genevieve Dilan), a couple working on a farm, who are in love with each other, though the clueless Guillot can’t acknowledge it. With the help of his Uncle Matthias (David Burgher), who sends them letters saying that when the Angelus rings, they’ll find what they are looking for beneath a big tree, they eventually find — each other. Meanwhile, two widows, Franchette (Isabel Merat) and Catherine (Kylie Buckham), are also vying for Guillot’s affection (or, more cynically, plotting to acquire his property). END_OF_DOCUMENT_TOKEN_TO_BE_REPLACED