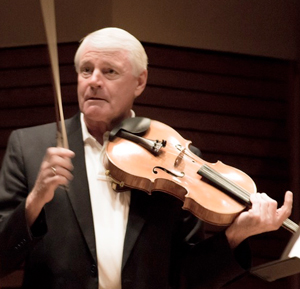 Robert Vernon, the longtime principal viola of The Cleveland Orchestra, played chamber music Monday night at West Shore Unitarian Universalist Church with six of his friends for the season finale of the Rocky River Chamber Music Society series. It was an evening of gorgeous chamber music by players who clearly enjoyed performing together.

The first and last pieces were viola quintets (a string quartet plus an extra viola). Mozart essentially invented the genre, and his C major quintet (K. 515) remains one of the greatest of its type. It is a sweeping, quasi-Romantic work in which none of the five parts is mere filler — certainly not the two viola parts!

A tender and engaging “Allegro” sets the mood, and the piece keeps growing as it moves into a minuet and trio with a syncopated feel and an intriguing sense of mystery. A haunting “Andante” (with a big viola solo for Vernon) is followed by a finale that starts out sounding like a factory-made, quick-close rondo, but turns out to be a complicated sonata-form piece with episodes of intense motivic development.

Immediately following the Schumann, the same group played three movements from Max Bruch’s Eight Pieces for clarinet, viola, and piano, Op. 83. The pairing with Schumann was a good idea: the Bruch compositions are less substantial but more accessible and make more of the smoky, elegiac quality of the instrumentation. Bruch knew how to write great openings with striking solo passages, and he knew how to end a piece: these tapered away with lovely, melancholy fallings off that left us wanting more.

Vernon’s string-playing friends returned for the second half of the concert, to perform Brahms’s String Quintet in G, Op. 111. This is a long and challenging piece, full of tumultuous and deliberate complexity, conceived in almost symphonic mode. The ensemble played it with intense commitment and almost unrelenting passion. The second movement, “Adagio,” was especially moving, the voices seeming each, in turn, to struggle up out of the complex texture.

Particularly in the fourth movement, there were some lapses in ensemble and intonation. This late Brahms quintet is a piece of such complexity that even these masterful players might well have used more rehearsal time. (There were last-minute changes in the makeup of the group, which may well have cut into preparation). Even so, the performance was welcomed by the full house with great enthusiasm — and rightly so.

The Rocky River Chamber Music Society, now finishing its 56th season, is to be commended for such high-quality offerings. How they manage to do this without charging admission is beyond me. I only wish that more young people had been in the audience to hear this great playing for free!

With this work, premiered in 1907, Sibelius offered a bold departure from the explosive emotionalism so prevalent in late-Romantic era music. This symphony was a renewed embrace of Classicism’s purity of form and melody, and one that, oddly enough, left many initial audiences of the day somewhat bewildered. END_OF_DOCUMENT_TOKEN_TO_BE_REPLACED

After eating a Po’boy from The Dawg Bowl Cajun food truck, I caught the first half of Brian Culbertson’s show in The Connor Palace Theatre. END_OF_DOCUMENT_TOKEN_TO_BE_REPLACED