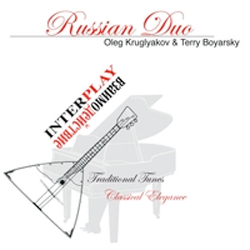 “At the beginning we saw ourselves as being strictly classical,” Boyarsky and Kruglyakov agreed during our recent Skype conversation. “But now we’re incorporating musical styles like tango, bluegrass and even some movie scores into our performances.” The album’s title, Interplay, is juxtaposed with the Russian word for interaction, взаимодействие, and is subtitled “traditional tunes / classical elegance.”

Lasting less than two minutes, the opening track, Kukushka (Cuckoo) by French baroque composer Louis-Claude Daquin, acts as the perfect prelude to Polonaise, by the father of the modern balalaika, Vasily Vasilievich Andreyev (1861-1918). This is followed by the Duo’s own arrangement of a Polonez by Polish composer Michał Kleofas Ogiński (1765-1833).

The sultry Sky Tango, by the French-Tunisian guitarist and composer Roland Dyens (b. 1955), is one of the album’s highlights. It also pairs wonderfully with the traditional Russian romance By The Sky By the Blue. Original music for balalaika and piano is featured with Evgeny Trostyansky’s Grotesque & Reflection, a jazzy work composed in the 1980s. Another twentieth-century track, Andrei Petrov’s (1930-2006) music from the famous Soviet film Amphibian Man, is a great addition to Interplay’s diverse playlist.

Folk-tunes include accordion virtuoso Nikolai Rizol’s (1919-2007) humorous Volga Tunee; Vladimir Ditel’s Korobushka Concert Variations, based on a traditional song about a peddler; and the bluesy Old Banjo by N. Kachalin. The album also features arrangements of “classical” selections. A Boccherini Menuet, a Handel Passacaglia, and Liszt’s Hungarian Rhapsody No. 2 round out the album’s feast of musical styles.

Recorded between January and March of 2015 at the Audio Recording Studio by recording engineer Bruce Gigax, the CD’s sound quality is superb. The balances between the piano and balalaika are perfect. The only downside is not musical but rather informational — there are no liner notes. Still, Interplay is a must-have. The album can ordered or downloaded on cdbaby.