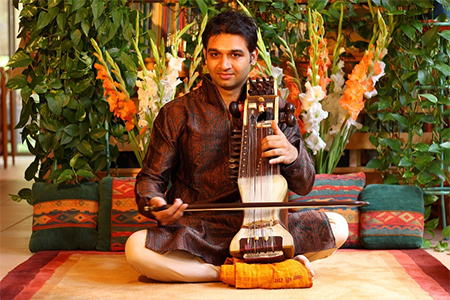 On Friday evening November 1, Youngstown’s Calvin Center for the Arts hosted a concert featuring sarangi virtuoso Harsh Narayan of Mumbai, India, accompanied by tabla artist Joe Culley of Kent, Ohio. The concert took place in the Yoga room, an intimate space that provided a warm atmosphere for the small but enthusiastic audience. Narayan explained that the sarangi dates back to 6th Century India, when at first it accompanied the human voice, even imitating vocal ornaments and slides. It has three melodic gut strings, and 37 brass or steel sympathetic strings that add support and resonance to the sound.

The Alap, the free-rhythmic and recitative-like opening section for Narayan’s solo, began in middle register with scale steps 6, 7, and 8, and gradually expanded to more notes that ranged up to the highest register. Narayan added more motion in the Jor section that followed.

The tempo increased in the Jhala, while still avoiding a sense of rhythmic regularity. The tabla finally entered for the extended Gat section, introducing a regular ten-beat cycle.

The rhythmic skill of avoiding the beginning of the cycle periodically led to both performers’ simultaneous returns to the start of the pattern. This, combined with complex syncopation and speed, produced the climax of the 30-minute composition.

Finally the tabla dropped out, and Narayan’s closing, trance-like meditative solo dissolved to silence. After a moment’s reflection, the audience burst into enthusiastic applause.

Following intermission, the two performers presented Raagmala in Michra Pilu, based on complex changing scale patterns related to various forms of the minor mode. The rhythmic cycle was Tintal, a rapid sixteen-beat structure.

In the early part of the Alap, a descending melody prevailed with a raised seventh step followed by a lowered sixth. Ascending lines added other scale steps, including the raised sixth, in the Jor and Jhala sections, widening the melodic range and increasing speed.

Culley entered in the Gat section and the two performers deftly exchanged phrases in fast Tintal, again delaying arrival on the sum, the pattern’s downbeat.

The opportunity to hear Indian Classical Music at this level is rare in Northeast Ohio. At the close of the concert, the audience leapt to its feet in a spontaneous standing ovation.