In 2013, the last time Schola Antiqua of Chicago visited the Helen D. Schubert concert series at St. John’s Cathedral in downtown Cleveland, the vocal ensemble took a look inside the world of Guillaume de Machaut. On Friday evening, February 21 at 7:30 pm, Michael Alan Anderson will lead his eight singers in “Slavic Routes: Music from Renaissance Prague.” A freewill offering will be received.

In a telephone conversation from Rochester, NY, where Anderson teaches musicology at the Eastman School of Music, the conductor noted that his singers have already performed the program in Chicago in 2016. “It’s been curated by Erika Honisch, a professor at SUNY Stony Brook, and is based on research that is soon to be released as a book.”

Anderson said that part of the mission of Schola Antiqua is to explore the canon of early vocal music, but also to draw on recent research and “to package programs under themes.” The Prague program, for example, seeks to serve up a slice of musical life in that important capital of the Holy Roman Empire around the year 1600. “We’re trying to show a whole landscape of music from high court art to local church music and hymns from the streets — covering all levels of society.”

The conductor noted that he enjoys letting his scholarly colleagues design some of the ensemble’s programs because they often introduce him to unfamiliar repertoire. “I didn’t know 60% of the music on the Prague program, which features both popular and insular composers.”

The former group includes motets by Jacobus Gallus (aka Jacob Handl), a local church musician who wrote more than 500 pieces in the genre. The concert will include his well-known Ecce quomodo moritur, “probably the most striking work on the program, with no fancy composing, just as direct as you can be,” as well as a pair of “Latin madrigals” honoring music and the glory of singing that end the evening. “I’d never encountered a Latin madrigal before,” Anderson said.

Orlandus Lassus is a well-known Renaissance figure, but Kryštof Harant and Carl Luython are among the more obscure local composers to be featured. One famous name in Renaissance music that comes as a surprise in a Prague-based program is that of English composer William Byrd.

“Philippe de Monte wrote Super flumina Babylonis, an 8-voice motet that somehow found its way to England. Monte may have exchanged music with Byrd, who seems to have responded with Quomodo cantabimus, an 8-voice piece on the same text that poignantly reflects the feelings of English Catholics, who found themselves — like the Babylonian Jews — exiled in a strange land.” 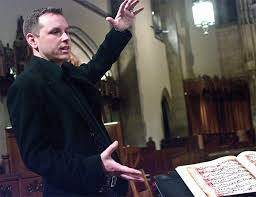 Schola Antiqua had its beginnings 20 years ago on the North Side of Chicago, where Anderson and a professor of his started something resembling a seminar class. “I had access to fellow singers in the Chicago Symphony Chorus, so I grabbed some people and we started singing Medieval chant.” Meanwhile, Anderson began Ph.D. studies in early music at the University of Chicago. The Schola spent its first five years giving concerts of sacred chant alongside the Newberry Consort, which specialized in secular music. “Between the two groups, we had a lot of early music covered in the city.”

After the ensemble had expanded its repertoire, Anderson took the reins of the Schola in 2008, but from his new post at the Eastman School. The ensemble gives several programs each year in Chicago, and undertakes limited tours. The evolution of the group has included establishing partnerships with museums, including the Rochester Museum, the Art Institute of Chicago, and the Met in New York, where the Schola has added sonic components to exhibitions of Medieval Art.

Anderson himself has embarked on a study of Medieval books of hours, a subject the Schola previewed in 2012. “Those little devotional books were very popular in the 15th century. Many of them contained references to musical works but no musical notation. I’ve spent the last decade filling in the gaps for art historians — bringing the often separate disciplines of art and music history together.”

The conductor hopes to be able to include a visual component in its Cleveland program, depending on technical arrangements. “The music doesn’t need enhancement, but it’s always nice to see some period art along with the music.”

END_OF_DOCUMENT_TOKEN_TO_BE_REPLACED

Rodgers & Hammerstein’s Cinderella was originally produced for television in 1957 — seven years after the animated Disney film was released — and starred Julie Andrews. According to the Rodgers & Hammerstein website, it was viewed by over 100 million people. END_OF_DOCUMENT_TOKEN_TO_BE_REPLACED

The story line has its origin in an 1855 play and an 1842 farce that Thornton Wilder mined for his 1938 play The Merchant of Yonkers. When that turned out to be a flop, in 1954 Wilder made the crucial decision to re-center the show around the character of the legendary marriage broker Dolly Gallagher Levi and renamed it The Matchmaker. END_OF_DOCUMENT_TOKEN_TO_BE_REPLACED

The Dodero Center for the Performing Arts at the Gilmore Academy in Gates Mills is one feature of an impressive campus. The auditorium is shallow, the stage is deep, and the ensemble played without a shell. Throughout the program, the sound, especially in instruments’ lower registers, tended to disappear. END_OF_DOCUMENT_TOKEN_TO_BE_REPLACED