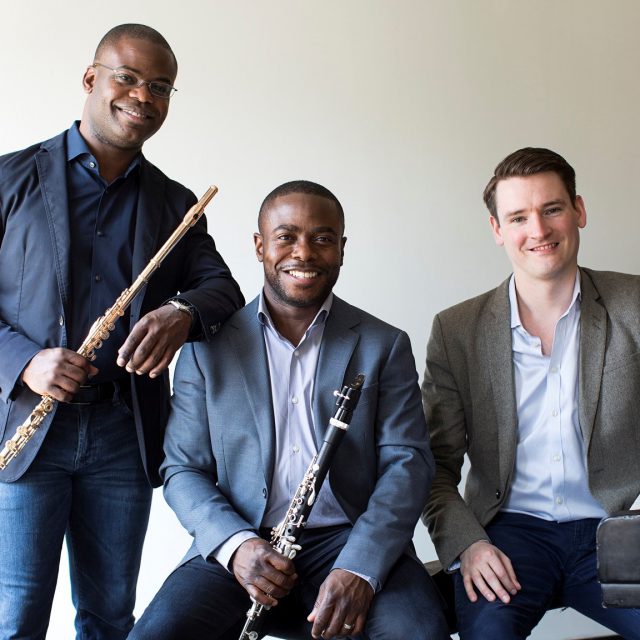 Two Chicagoans and an Irishman walk into a bar — or rather, a university. That’s the origin story of the McGill/McHale Trio.

The university is none other than Bowling Green, where flutist Demarre McGill and clarinetist Anthony McGill were artists in residency in 2014. There they performed alongside a pianist hailing from Belfast — Michael McHale — and a long-term partnership began to brew.

The Trio will return not quite to the scene of the crime, but close, when they perform on the Kent Blossom Music Festival’s Faculty Concert Series as Kulas Visiting Artists on Wednesday, July 13 at 7:30 pm at Kent State’s Ludwig Recital Hall. Tickets are available here.

Their program will draw on Portraits, the album they recorded in 2017 on the Cedille Records label, which featured a slew of world-premiere recordings of works by living composers: Valerie Coleman (Portraits of Langston), Chris Rogerson (A Fish Will Rise), Paul Schoenfield (Sonatina for Flute, Clarinet and Piano), and Philip Hammond (the trio version of his Lamentation of Owen O’Neil).

Also recorded for the first time were two arrangements by McHale: Sergei Rachmaninoff’s Vocalise and the Irish traditional song The Lark in the Clear Air. Topping it all off was Guillaume Connesson’s Techno – Parade — not a premiere, but a piece that has drawn little attention from recording artists, and one written by a living composer as well.

The variety encompassed by that playlist was one topic that came up during an interview the Trio gave with the record label in 2017. “I think the mix shows a lot of our characters, personalities, histories, and roots,” Anthony McGill said. “Putting that together and then putting it down for all of history on this album is something that we’re really proud of.”

Flute, clarinet, and piano is not a particularly traditional combination, and as McHale pointed out, the challenge of finding the right repertoire led to opportunity. “What’s so exciting for us is to be able to commission composers that we’ve worked with,” he said, noting that Hammond and Rogerson wrote their pieces especially for the Trio.

As for their personnel? That came up during another conversation. “I met my brother about 37 years ago,” Anthony joked. “And we met Michael just a couple years ago. We just clicked right away, and it’s been a wonderful collaboration ever since.” It doesn’t hurt, he added, that their last names bear some resemblance.

It was interesting to hear McHale speak about the experience of playing with the McGills. “The fascinating thing from my point of view is how well and how closely they work together,” he said. “You can just tell there’s that family history, so for me to click in with them — because they’re so on it all the time — makes it just a total dream.”

Demarre shared his perspective on that subject during an interview with ClevelandClassical.com in the summer of 2017, noting how intuitive it is to play with his brother.

“With pieces like the Shostakovich Four Waltzes, which has room for rubato all over the place, we don’t really have to discuss it. We don’t have to say to each other, ‘How about we take some time here?’ So it can really be different every single time, and it works out. It’s something that’s easy to take for granted because we’re used to it, but it’s a real pleasure.”

Perhaps that level of communication comes from “growing up in the same room,” Demarre said. “I’m four years older, which is a big difference when you’re young, so he was hearing me play for some years before he started.” Not to take any credit for Anthony’s success, he added, laughing. “But he has a sense of my concept of sound from when we were kids and I was actually developing that concept.”

Asked if the two brothers — and principal musicians in major orchestras on either coast — get tired of answering questions about each other, Demarre laughed. “We get along, we like each other, so it’s ok.”

END_OF_DOCUMENT_TOKEN_TO_BE_REPLACED

Supported by engagingly, yet simple staging by Cara Consilvio, a well-prepared cast of singers told the archetypal story of Cinderella with charm and flair. Framing the production was  a sparse but colorful set and wonderful lighting by Dave Brooks. END_OF_DOCUMENT_TOKEN_TO_BE_REPLACED