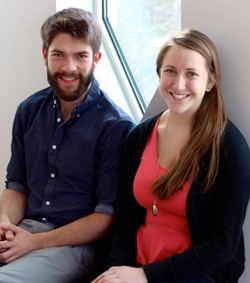 Sometimes the only way to make something happen is to take the bull by the horns and do it yourself. A case in point is the enterprising duo of flutist Hannah Hammel and bassoonist Ben Roidl-Ward, a.k.a. Second Species. On Wednesday, March 2 at 9 pm in Oberlin’s Fairchild Chapel and Thursday, March 3 at 8pm in St. John’s Episcopal Church in Ohio City’s Hingetown neighborhood, the duo will present a diverse program of new and recently commissioned works. Thursday’s performance is sponsored by the Syndicate for the New Arts and the St. John’s Institute.

The Oberlin and Cleveland concerts are part of a seven-city tour that also includes stops in Houston, Richmond, New York City, Boston, and Chicago. We spoke to the duo in a joint telephone conversation while they were en route from Richmond to New York City. “We’ve been planning this tour since last summer,” Roidl-Ward said. “It’s been a lot of work, but it’s worth it.” Hammel and Roidl-Ward are both recent graduates of the Oberlin Conservatory and are currently in their first year of graduate school at Rice University.

The duo couldn’t be more pleased with the variety of venues they’ve assembled for the tour. “Each venue is very different,” Hammel noted. “We’re playing in a couple of bars and restaurants, a chapel, a church, and a recording studio in Boston. It’s cool that each one offers a different experience.”

There are many reasons behind the duo’s name Second Species. “The first piece that Hannah and I commissioned was titled carnal species by Kurt Isaacson,” said Roidl-Ward. “We’re also trying to create new repertoire for the flute and bassoon — almost like different ‘species’ for this combination.”

Following their performance in Hammel’s hometown of Richmond, the flutist discovered an additional reason why the name is fitting. “My childhood piano teacher was there and mentioned that another reason for the name might have to do with my parents. At first I had no idea what she was talking about, but then I realized that my mom plays the flute and my dad plays the bassoon. Now we’re the second generation of bassoon and flute.”

The duo said that that their program offers a broad spectrum of musical style, from the radical avant-garde to the more traditional. “Audiences have told us that they love each piece individually, but their favorite part of the program is its diversity,” Hammel said. “I do feel like there’s a piece for everyone on the program.”

I asked Hammel and Roidl-Ward to talk about their program:

Seven Pieces (2015) for flute and bassoon by Theo Chandler

Roidl-Ward: They’re seven short movements written in a very tonal language. It does tend to get a little more jazzy than what I’ve heard in his earlier works. The seventh movement is called Groove, and it’s fun, light-hearted, spirited music. As a clarinetist he knows these instruments so well and writes for them so skillfully.

Enlaced (2016) for flute and bassoon by Jesse Limbacher

Hammel: The piece is in ABA form. The A sections utilize unisons between the two instruments, and the blend is so seamless that at certain points you can’t really tell who is playing. The B section has the two instruments playing fast, overlapping rhythms of single-note staccatos. Jesse and I went to high school together, and it was great to play the piece in Richmond because some of our former teachers and his dad came to the concert. Jesse went to the Cleveland Institute of Music, so he knows a lot of people in Cleveland and is excited that we’re performing his piece here.

Hammel: Daria is a first-year master’s student at Rice. I first heard her music last year in Oberlin when another chamber group played a trio by her that I really enjoyed. When we met I told her that I’d really like it if she would write a solo piece for me. The piece is inspired by the idea of the struggle that it takes to find your way out of a maze. She uses a tonal language that is really beautiful. She also writes some very quick character changes that evoke someone excitedly running around the maze and then becoming exhausted and struggling, and I think she really captured these emotions very well.

Roidl-Ward: I premiered the piece in Chicago in January. Chris is a Chicago-based composer working on a doctorate at Northwestern. He became obsessed with all of the multiphonics that are possible on the bassoon. He’s actually a violist but he spent two years doing research, and he knows the bassoon better than any other non-bassoonist in the world. It’s a beast of a piece. Basically he takes the base fingerings and adds and subtracts keys to produce a kaleidoscope of sounds that carries on throughout the piece. I’ve discovered a lot of things about the bassoon from playing the work.

Caccia (2016) for flute and bassoon by Peter Kramer

Hammel: The title refers to the Renaissance musical form where two voices chase each other in canon and in unison. The two instruments step on each other’s toes, cutting each other off and chasing each other. It’s exciting and fast-paced. For much of the piece I’m playing with air sounds, or singing and playing, so there isn’t a lot of traditional flute playing.

Roidl-Ward: Rob is a composer that I’ve known since I was a little kid. His background is in jazz and bebop, and he’s an incredible bass player, which is how I first got to know him. The piece based on different jazz standard love songs, so he’s taken tunes like Misty and Cheek to Cheek and woven them together. We’ve been playing it at the end of the program because I think it’s a wonderful way to send everyone off.

END_OF_DOCUMENT_TOKEN_TO_BE_REPLACED

The strings-only work by Berg has made relatively frequent appearances on the Orchestra’s programs. In 2021, the musicians recorded it for the In Focus series, and it appeared again on last year’s European tour. Friday’s rendition maintained the group’s characteristic light and effortless playing, each section blending as much as possible to echo the work’s original form as a string quartet. At fifteen minutes total, the piece is quite short, but the dense encoded musical meanings require some extra-attentive listening. Splitting up the three movements ensured that each one could be appreciated on its own. END_OF_DOCUMENT_TOKEN_TO_BE_REPLACED