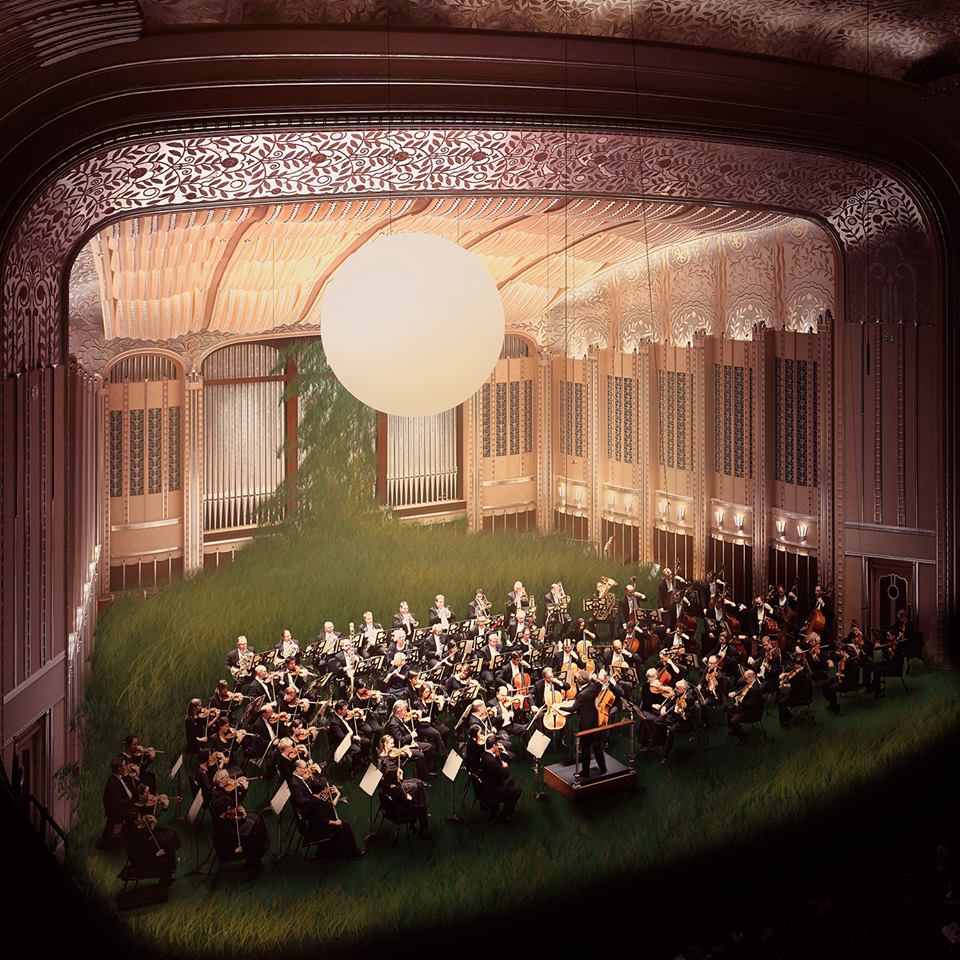 “Severance Hall is going to be turned into a picturesque landscape of nature,” said Julie Kim, director of operations for The Cleveland Orchestra, during a telephone conversation. The outdoors will be brought inside when Franz Welser-Möst leads a cast of internationally-renowned singers in a new production of Richard Strauss’s one-act opera, Daphne, on Wednesday, May 27 at 7:30 pm, and Saturday, May 30 at 8:00 pm.

Strauss described the opera as a “bucolic tragedy” which tells the story of a young woman who must choose between the love of men and her love for nature. The cast will include soprano Regine Hangler as Daphne, tenor Andreas Schager as Apollo, tenor Norbert Ernst as Leukippos, bass Ain Anger as Peneios and mezzo-soprano Nancy Maultsby as Gaea. The opera will be sung in German with English supertitles and will be presented without intermission. (Running time is approximately 95 minutes).

Kim said was important to create a natural environment inside Severance Hall because it evokes the theme of the opera. The task of the design team was “to do it in a simple way that aligns with stage director James Darrah’s esthetic of using simple elements to create something beautiful.”

Creating a natural environment inside Severance Hall was no small task, but according to Emily MacDonald, who along with her husband, Cameron Jaye Mock, created the scenic, lighting, and projection design for the production, “the opera’s such a beautiful story that we immediately had a lot of imagery about where we wanted to take it visually.”

MacDonald described the creative process as a collaboration between herself, Mock, director James Darrah, and Peabody Southwell, who along with MacDonald designed the costumes. “We all shared our feelings about the opera and began to bat around some ideas. We’re all very visually-minded, so we posed things that felt right to us in terms of imagery and the story.”

For this particular project, MacDonald said that she and Mock produced an unusual number of initial renderings and 3D draftings for the set that showed how the space would be transformed. “We also needed to figure out how we were going to fit the orchestra, a 42-person chorus, and all the principals on the stage and still have room for movement. It was a little tricky.”

Another challenge was creating the feeling that the orchestra was playing in a field or meadow. “The idea that we were taking the music outside led us down the road of looking at using artificial grass. Of course, we don’t people to think about it as being artificial, we want them to feel the sense of nature. We tested a lot of different options, and the team here at Severance was really cooperative during the process of figuring out what was going to work best.”

In this production, Daphne is represented both by a singer and a dancer. Bryna Pascoe plays Daphne during the orchestral sections of the score. “The dancer represents the essence of Daphne herself, so we needed to design a dress that would look as natural and as possible. It’s made out of strips of sheer fabric, so that every time she moves it moves with her, and flies around in the air.”

Emily MacDonald and Peabody Southwell also needed to design a dress that could be worn by both a woman and a man — at the festival of Dionysos, Leukippos disguises himself as a woman in order to dance with Daphne. “It was interesting to try to create something that would fit both of them, said MacDonald. It was made to be adjustable, as well as evoking the confinement that the community is placing on Daphne to be something that she is not, so we wanted it to feel and look very restrictive.”

What is it about the story of the opera that MacDonald finds attractive? “When I first encountered the piece I was really taken by the final transformation scene.” (At the end of the opera, Daphne mourns with the dying Leukippos. Apollo is filled with regret. He asks Zeus to give Daphne new life in the form of one of the trees she loves. Daphne is transformed, and she rejoices in her union with nature.) “I think that particular moment is breathtaking. It’s so brilliant that she becomes something beyond human. She doesn’t sing — it’s only orchestral. Daphne becomes music itself.”

In the second part of this article, Julie Kim, TCO director of operations, will describe the role of her department in bringing the design team’s vision to reality.

Published on ClevelandClassical.com May 22, 2015.

The cimbalom was the feature of the show, an instrument capable of taking on many personas. Its performer, Chester Englander, has shaped his career around the instrument, and has inspired composers to write more repertoire for it, some of which was presented on the program. END_OF_DOCUMENT_TOKEN_TO_BE_REPLACED

You wouldn’t expect that acoustic from a glance at the nave, which is wide and long, but not especially lofty. But when I guest conducted a local amateur choir and professional orchestra in Beethoven’s Mass in C there a few years back, during the first rehearsal we released the final chord of the “Gloria” and listened in astonishment for the next several seconds. The sound continued to roll down the space like the big wave that surfers dream about. END_OF_DOCUMENT_TOKEN_TO_BE_REPLACED