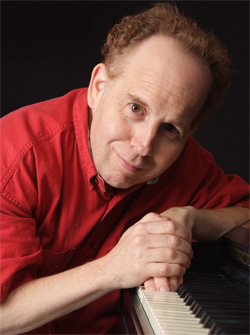 “The first time I did the whole thing within a month — two a week for four weeks. That was kind of crazy. The second time it was one concert per month, which is what I’m hopefully doing now.”

“Now” refers to the current season, when pianist Daniel Shapiro begins his third expedition into Beethoven’s 32 piano sonatas on Sunday, September 13 with a 5:00 pm performance on the Music From The Western Reserve series at Christ Church in Hudson. Because COVID-19 has precluded live audiences at the beginning of the season, Shapiro is pre-recording his recital this week for streaming on Sunday.

In a telephone conversation, Daniel Shapiro noted that he had played that first “kind of crazy” cycle in 1995 when he was teaching at the University of Iowa, and the second in 2001-2002 after he had joined the faculty of the Cleveland Institute of Music. The third will be spaced throughout 2020-2021 at several area venues, details still to be announced.

What have his past experiences taught him about the sonatas? “How difficult they are. But I learn new facets and angles every time. The second time through, my wife was pregnant with our second child, and raising kids put a new perspective on the project.”

Experience and the passing of time have been both inspiring and humbling, he said. “Hopefully the sonatas have ripened and deepened in some way. But as one gets older, the physical mechanism doesn’t work quite as easily as it did when you were younger, so you have to practice harder and wish for luck to pull off some things in performance that in earlier years would just come naturally. It’s always a tradeoff.”

Shapiro’s first program in Hudson will include the three sonatas of Op. 2 — he said that during the cycle he’ll try to keep opuses together as much as possible. “The Op. 2 sonatas are all big statements and extremely different from each other. Then I’ll conclude Sunday’s recital with Op. 90, so the program will end pianissimo.”

Because the composer was himself a virtuoso pianist, his sonatas aren’t easy for other performers to put across, both from a technical and interpretive standpoint. “Probably Op. 101 is the most difficult to figure out,” Shapiro said. “I don’t know if ‘slippery’ is the right word, but it’s difficult to fathom and to capture just the right tenor of expression.”

It’s also tricky to recreate the sense of impulsiveness for which Beethoven’s works are famous. “A lot of things that were startling in his music in Beethoven’s time don’t have the same effect now,” Shapiro said. “But I do believe that when we perform any great piece we have to imagine that we are composing it for the first time. In that sense the surprises can still be surprising.”

I asked the pianist to imagine sitting down to enjoy a beer with Beethoven. What questions would he jot down in the composer’s conversation book?

“All kinds of things. Has he heard anything that I’ve done, and am I at all on the right track? How does he like to hear his sonatas played on modern Steinways? (I think he would like them very much, but it would be nice to have that confirmed.) What is essential to bring across to an audience in playing his music? And what about his metronome markings for the ‘Hammerklavier’ Sonata?”

Shapiro continued with the subject of tempos. “Beethoven’s metronome markings are intriguing, fascinating, and problematic, but they give us a point of departure. In the case of the ‘Hammerklavier,’ I think he’s telling us that he wants the first movement to be fiery, fast, and vivacious, not at all maestoso or pomposo. In the opening of the Pastoral Symphony, he writes Allegro ma non troppo, but his metronome marking wouldn’t sound like that. My inclination would be to go with the printed word.”

Those are all intriguing subjects — more for pianists and pedagogues than for the general audience. But in this, the 250th anniversary year of the composer’s birth, Daniel Shapiro believes that Beethoven has never been more important. “Given what’s been going on in the world, I think this is a great time to hear Beethoven’s music. His message is absolutely relevant today, as much as it ever has been.”