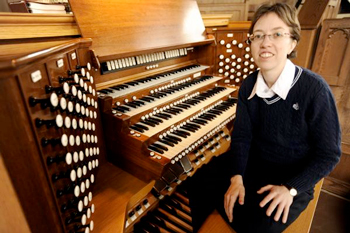 Conflicts abound in Northeast Ohio’s concert schedule, but not so often do two enticing organ recitals take place at the same hour right across the street from one another. Given the choice of Isabelle Demers’ recital at Fairmount Presbyterian and James Higdon’s all-Alain program at St. Paul’s on September 24, what to do? I decided to catch part of both programs.

Demers’ program, co-sponsored by Fairmount and the Cleveland Chapter of the American Guild of Organists, was partly designed to commemorate the 500th anniversary of the Protestant Reformation with catechism chorales by J.S. Bach, fantasies on Martin Luther’s hymn Ein feste Burg ist unser Gott, and Demers’ own transcription of Mendelssohn’s “Reformation” Symphony — with a preface by Charles-Marie Widor and an excursion into wizardry.

Higdon’s program, part of the Ars Organi series, drew on the University of Kansas organ professor’s lifelong studies of the music of Jehan Ariste Alain, the visionary French composer whose life was cut short by World War II.

The vivacious Demers began not with the famous Toccata, but with the less-often-played first movement of Widor’s Fifth Symphony, an inventive set of continuous variations on a perky theme that explores a range of colors and textures. The main part of Fairmount’s 100-rank Schantz organ is in the gallery, but Demers played most of her recital from a console in the front of the church, allowing the audience to watch all of her complicated stop changes and admire her efficient technique, of which she commands a stunning quantity.

Playing at such a distance from the pipes must have been tricky in the Widor, but it was downright daring in Bach’s Jesus Christus unser Heiland, the first of two chorales from the German Organ Mass. As Demers noted in comments from the lectern, the left-hand line features wide leaps — 72 of them — while the right hand is busy with sixteenth notes and the pedal plays the tune on a reed stop. No less demanding, in a different way, is the five-voice setting of Aus tiefer Not schrei ich zu dir, which includes two independent pedal lines. Demers pulled both pieces off with nonchalance.

Moving to the console in the gallery because the front keydesk lacked one important stop tab, Demers invoked the magical world of Harry Potter through her own arrangement of music from John Williams’ film score. That tab controls the organ’s celesta stop, which along with the chimes played important roles in the texture of Williams’ quirky, definitely non-Muggle music.

The first half concluded with Max Reger’s Ein feste Burg Fantasy, a typically complex — and prolix — meditation on the hymn tune of the sort that Liszt might have admired. Demers did her best to clarify its structure and reveal its connection to Luther’s tune, but Reger can often be a bit much to digest. Deciding to catch the second half of the St. Paul’s concert meant having to skip Charles-Valentin Alkan’s Impromptu on the same tune, which might have proved more interesting. 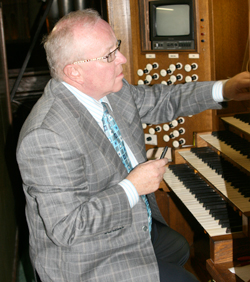 When I checked in at St. Paul’s, James Higdon was finishing Jehan Alain’s Aria, having already performed Litanies, Le jardin suspendu, Intermezzo, Lamento, the Deux Fantaisies, and the Deux Chorals. The Postlude pour l’office de complies, eminently suitable to follow Compline, the last monastic service before bedtime, hovered dreamily in the air like incense, infused with fragments of Gregorian Chant.

Higdon’s recital ended with the Trois Danses, thematically interconnected, jazz-inspired works originally conceived for the piano, but rich with such color possibilities that the composer began orchestrating them before his tragic death. “Joies” (Joys) sets up its theme with an infectious ⅞ ostinato which is emotionally transformed into “Deuils” (Mourning), and undergoes yet another mutation for “Luttes” (Struggles). That ostinato is never far away as the three dances proceed amid some staggering rhythmic challenges for the player.

The recitalist paced each of the three works expertly, played them with an expressive precision, and registered them with a fine sensitivity to the resources of the 1952 Holtkamp organ. And on what must have been one of the hottest September afternoons on record, Higdon seemed unfazed by the heat in St. Paul’s nave. Yet another fine installment in the seven-event Ars Organi.

END_OF_DOCUMENT_TOKEN_TO_BE_REPLACED

Supported by engagingly, yet simple staging by Cara Consilvio, a well-prepared cast of singers told the archetypal story of Cinderella with charm and flair. Framing the production was  a sparse but colorful set and wonderful lighting by Dave Brooks. END_OF_DOCUMENT_TOKEN_TO_BE_REPLACED