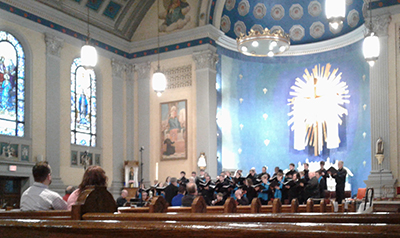 Singers Companye, Samuel Gordon’s Akron-based chamber choir, gave three performances of its spring program “An Unclouded Day: A Celebration of Love” in Cleveland, Fairlawn, and Hudson on April 20, 22, and 28. In their first concert at Mary Queen of Peace Church in Cleveland’s Old Brooklyn neighborhood, they presented assured performances of modern choral works, including several by composers with Scandinavian and Baltic roots who write in expressive, opulent textures.

The repertoire well suited the venue on Friday evening. MQP is a vast, barrel-vaulted space that envelops choral sound in a nimbus that can either enhance its spiritual qualities or fuzz up its polyphony. Singers Companye’s 45 voices luxuriated in this acoustic, producing colorful tapestries of tone and impressive fortes. The chorus was enhanced by a string quartet (Cory Smith and Amy Glick, violins, Ann Smith, viola, and Greg Fiocca, cello), with Robert Mollard at an electronic keyboard.

The ensemble’s theme for the season is “The Hope of Loving,” named after the central piece on Friday’s program, a cycle of poems by various authors set to music by Minneapolis-based Jake Runestad and featuring soloists Rachel Morrison, soprano, Michael Lucas, tenor, and Paul Stewart, baritone. The literary sources include an 8th-century Sufi female saint, Francis of Assisi, 14th-century Persian poet Hafiz, St. John of the Cross, and Meister Eckhart. Midway through the six-movement piece, the string quartet played a wordless interlude, “The Heart’s Veil.”

The rest of the repertoire alternated between expressions of religious love and love’s more humanistic manifestations, beginning with the Gregorian chant Ubi caritas et amor and one of Ola Gjeilo’s settings of that traditional Holy Thursday text that accompanies the ritual of footwashing. Gordon and several members of the chorus introduced individual items with spoken commentary.

Norwegian composer Kim André Amesen was represented by The Gift I’ll Leave You, American composer Steve Dobrogosz with the “Lux aeterna” from his Requiem.

Following the big Runestad work, we heard settings of two Sara Teasdale poems by Latvian composer Ēriks Ešenvalds, a John Muir text about a visit to the woods with music by Runestad, Gjeilo’s setting of Yeats’ The Lake Isle, the spiritual Way Over in Beulah Lan’ arranged by Stacey V. Gibbs, and the gospel-inspired Heavenly Home: Three American Songs arranged by Shawn Kirchner.

Throughout the program, the well-trained ensemble produced vibrant, well-blended choral sound crowned with powerful climaxes. A lot of detail necessarily got fogged over by the lively acoustic of the church — the more energetic music suffered the most — but it was clear that Singers Companye was in full control of their challenging repertoire on Friday. The audience was tiny, but highly appreciative.

END_OF_DOCUMENT_TOKEN_TO_BE_REPLACED

The strings-only work by Berg has made relatively frequent appearances on the Orchestra’s programs. In 2021, the musicians recorded it for the In Focus series, and it appeared again on last year’s European tour. Friday’s rendition maintained the group’s characteristic light and effortless playing, each section blending as much as possible to echo the work’s original form as a string quartet. At fifteen minutes total, the piece is quite short, but the dense encoded musical meanings require some extra-attentive listening. Splitting up the three movements ensured that each one could be appreciated on its own. END_OF_DOCUMENT_TOKEN_TO_BE_REPLACED