Singers Companye, the 40-voice chorus conducted by University of Akron emeritus professor Samuel Gordon, will cap off their 17th season with a program of contemporary choral music on Sunday, May 15 at 4:00 pm at Faith Lutheran Church in Fairlawn. The program includes music by Ola Gjeilo, Tarik O’Regan, Eric Whitacre, and Joan Szymko, accompanied by a string ensemble.

Gordon said in a recent telephone conversation that he started the ensemble at the encouragement of his former UA students. “I realized there were lots of teachers I had trained in the area, and they all had expressed an interest in continuing to sing, so we just started doing that. Now of the 40 people in the group, I would guess that 30 to 32 of them are teachers.”

With all those teachers in the ensemble, are there a lot of individual opinions to deal with in the rehearsal room? “Oh, yes,” Gordon said. “It’s always a challenge, but I think the opinions congeal into something rich artistically. Everyone’s remarkably dedicated, and it’s like a big family. There are always questions about why I’m doing this or that, but it’s a great dialogue. I feel challenged at every rehearsal and every performance, but I see that as a positive thing.” 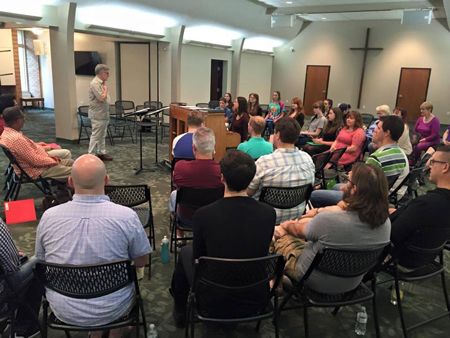 In addition to his work with the adult singers, Gordon has recently launched “Young Singers Companye,” a free vocal academy for students ages 12-18 to prepare them for a professional-level choral experience. The program includes Sing-In days with Singers Companye (photo above from October, 2015). “The feedback suggests that it’s making a huge difference. The participants go back and act as missionaries for the program in their own schools.”

I asked Samuel Gordon to talk about the individual works on the May 15 concert.

“The longest piece on the program is the Sunrise Mass for chorus and strings. Gjeilo likes to work transcendence, mystery, joy, and peace into his compositions. When there is any conflict, it always resolves — you’re not going to find very much of the dissonant or acerbic in his music. He writes music that’s rather straightforward and agreeable to the ear.

“I think he’s a good programming choice because we live in a world full of dissonance. I think it’s a wonderful thing for people to come into a listening space and just be wrapped in beautiful sound. The first movement, ‘Spheres,’ evokes transcendence in ethereal language that never touches the earth. As the piece progresses, you feel the warmth of the music in the sunrise.

“The second movement, ‘The City,’ is chaotic, with constantly shifting rhythms and rapid-fire playing by the strings. A solo violin emerges out of all this chaos as if the individual is emerging, and the piece ends with ‘The Ground,’ with its message of ‘Give us Peace.’”

“O’Regan is of Irish, Algerian, and Sri Lankan heritage. He’s from Oxford, England but now lives in New York. The first movement, ‘Threnody,’ was written first as a stand-alone. Then he got another commission and joined it to two more movements. The texts by William Penn, Muhammad Rajab Al-Bayoumi, William Blake, and Psalm 133 are about what we feel about death.

“O’Regan is a rock drummer, and in ‘Threnody,’ his images are those of a very dynamic, vibrant, American city in contrast to his quiet, English life. The second movement, ‘As we remember them,’ with words from John Milton’s Paradise Lost and scored for shimmering strings, is quiet and still.

“The last movement, ‘From heaven distill the clemency,’ sets words from 9th- and 13th-century Indian texts, William Wordsworth, and Thomas Hardy — the Hardy about the signing of the armistice in World War I in 1918. Triptych is a real challenge for the singers because it requires so much counting and brain work.”

“Like most of Whitacre’s music, it’s set to poetry by Charles Silvestre. It was commissioned by the Tallis Scholars for their 40th anniversary. An innocent girl walks into the Chapel in Paris and hears the angels in the windows singing, ‘Hosanna in the Highest.’ Multi-colored light flows in and the piece ends with the whole chapel being illuminated with the angels and their singing. It’s a stunning eight minutes of music.”

“Joan is a feminist composer whose most recent work is a big piece about AIDS. The text of Carpe Diem is from an ode by Horace where a sage is speaking to a group of young women. It begins with a dialogue, then it takes a sharp turn into the sage’s philosophy: just pluck the grapes and drink the wine and enjoy.”

Franz Schmidt’s Symphony No. 4 showcased the ensemble, under guest conductor Jonathan Berman, in the standard conventions of a not-so-standard piece. But at the start of the program, the musicians were equal partners to pianist Cédric Tiberghien, whose playing could be as bold as the full orchestra or as intimate as any instrumental solo. END_OF_DOCUMENT_TOKEN_TO_BE_REPLACED

END_OF_DOCUMENT_TOKEN_TO_BE_REPLACED

Jackson began the program with a recitation of Langston Hughes’ poem “Helen Keller” — the first of five poems by Hughes that served as interludes between each piece on the first half. END_OF_DOCUMENT_TOKEN_TO_BE_REPLACED

Pianos with pins and tape on strings, a bass drum and tam tam, crotales, Almglocken, and vibes. Microphones were hooked up all around the instruments. The feed was sent to speakers around the room. Lighting designer Nicholas Houfek hung incandescent globes over the arrangement of instruments from thin black wires stretching across the beams. END_OF_DOCUMENT_TOKEN_TO_BE_REPLACED

From the podium, Elim Chan set an ambitious tone for the evening. The rising star conductor, here in her Cleveland Orchestra debut, has a commanding style, and every twist and turn in Saturday’s performance tracked closely with her baton. END_OF_DOCUMENT_TOKEN_TO_BE_REPLACED