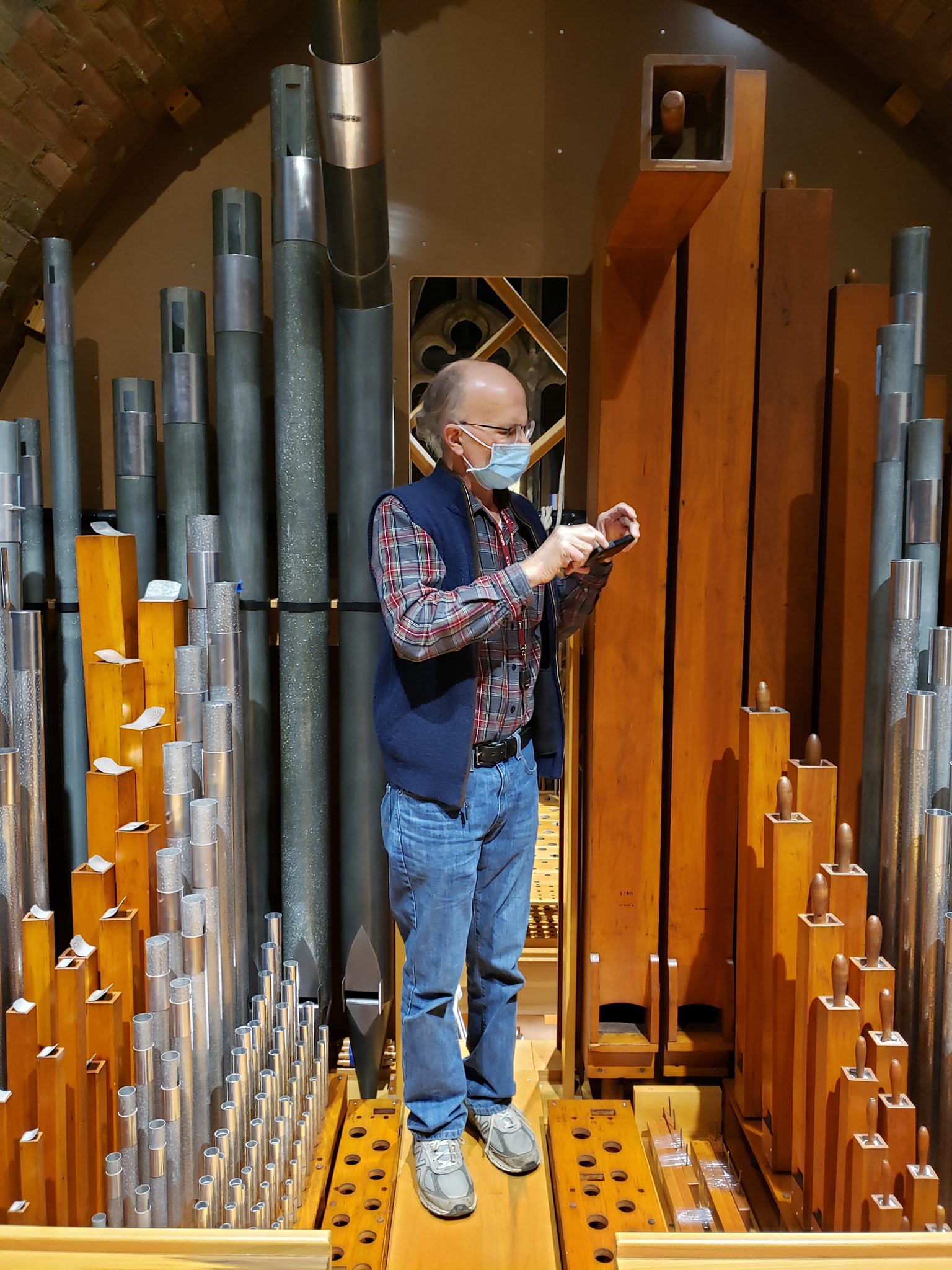 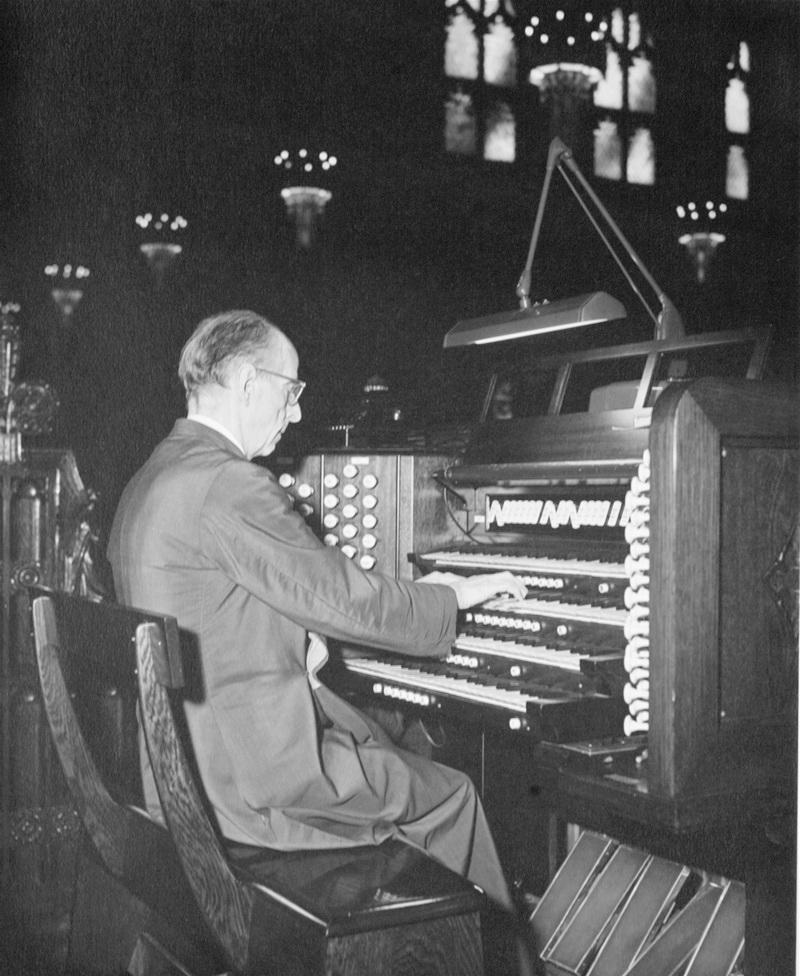 The remains of the Skinner were finally removed in advance of the construction of Trinity Commons in 2002, and salvageable pipework was donated to other organ projects. 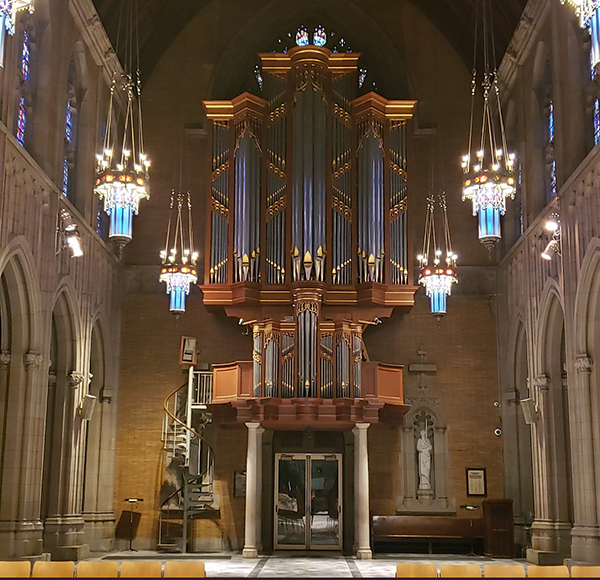 After the author of this article retired as music director in 2008, his successor Horst Buchholz and then-assistant organist Todd Wilson began discussing the need for an eclectic instrument in the Anglican tradition at the chancel end of the Cathedral. Long story short, the former instrument from St. Paul’s Episcopal Church in Richmond, Virginia was purchased, and combined with remnants from Emmanuel Episcopal Church in Cleveland and pipework from a few other sources, has been repurposed into a new four-manual instrument for Trinity Cathedral.

“People in Richmond fondly remember their 1949 instrument,” Wilson said, “which was played for many years by Raymond Glover, who also served as editor of the Episcopal Church’s Hymnal 1982.” And parishioners of the Church of the Transfiguration, later renamed Emmanuel Church, should be happy to know that part of their Skinner instrument lives on at Trinity Cathedral.

Wilson guesses that tonal finishing will take six weeks, meaning that the refurbished organ should be playable and enjoyable by Easter, “if nothing untoward happens,” he added. “We plan to have it blessed by the Bishop on All Saints’ Day, November 1 — I hope that’s a safe date.”

Architecturally, even though the East chamber of the 1907 organ was turned into a choral rehearsal room and offices in 2002, the space is large enough to accommodate both the new pipework and facilities for the Cathedral musicians.

Musically, the new organ will provide both a complementary and contrasting voice to that of the Dutch instrument. “There’s a new tuba in the solo which should be effective, and a new French horn,” Wilson said. “There are new wooden resonators on the 16-foot reed (above) that should add some real fundamental tone to the sound. Originally, those were metal, but the wooden ones should move more air.”

The new organ will also offer playing aids for performers that the Flentrop has intentionally avoided. “I have become so fond of the Flentrop, and so grateful to it,” Wilson said. “It has made me much more adaptable as an organist. But it will be nice to have combination pistons, swell boxes, and solo sounds for the Evensong repertoire, and fun to have the ability for dueling organs like Memorial Church at Harvard, and First Congregational in Columbus.”

Listeners should also appreciate the Skinner’s new, moveable console (above), which will allow the audience to see organists in action — something Wilson has only been able to accomplish with the Flentrop by using closed-circuit television. (Below, associate organist Nicole Keller at the Flentrop.)

Todd Wilson is restlessly looking forward to the resumption of in-person services and concerts, which have been suspended at Trinity Cathedral since last March. “We’re coping as well as anybody is with online substitutes, but as we get to the one-year mark, I’m getting a bit worn down mentally and eager to have done with it. We have to stick our necks out. Waiting longer is a greater risk.”

Listen to a WCLV Ideastream interview about the new organ here. We’ll be back with more coverage once the instrument is completely playable.

More photos of the renovation and installation can be viewed on the Muller Company’s Facebook Page.

END_OF_DOCUMENT_TOKEN_TO_BE_REPLACED

Supported by engagingly, yet simple staging by Cara Consilvio, a well-prepared cast of singers told the archetypal story of Cinderella with charm and flair. Framing the production was  a sparse but colorful set and wonderful lighting by Dave Brooks. END_OF_DOCUMENT_TOKEN_TO_BE_REPLACED